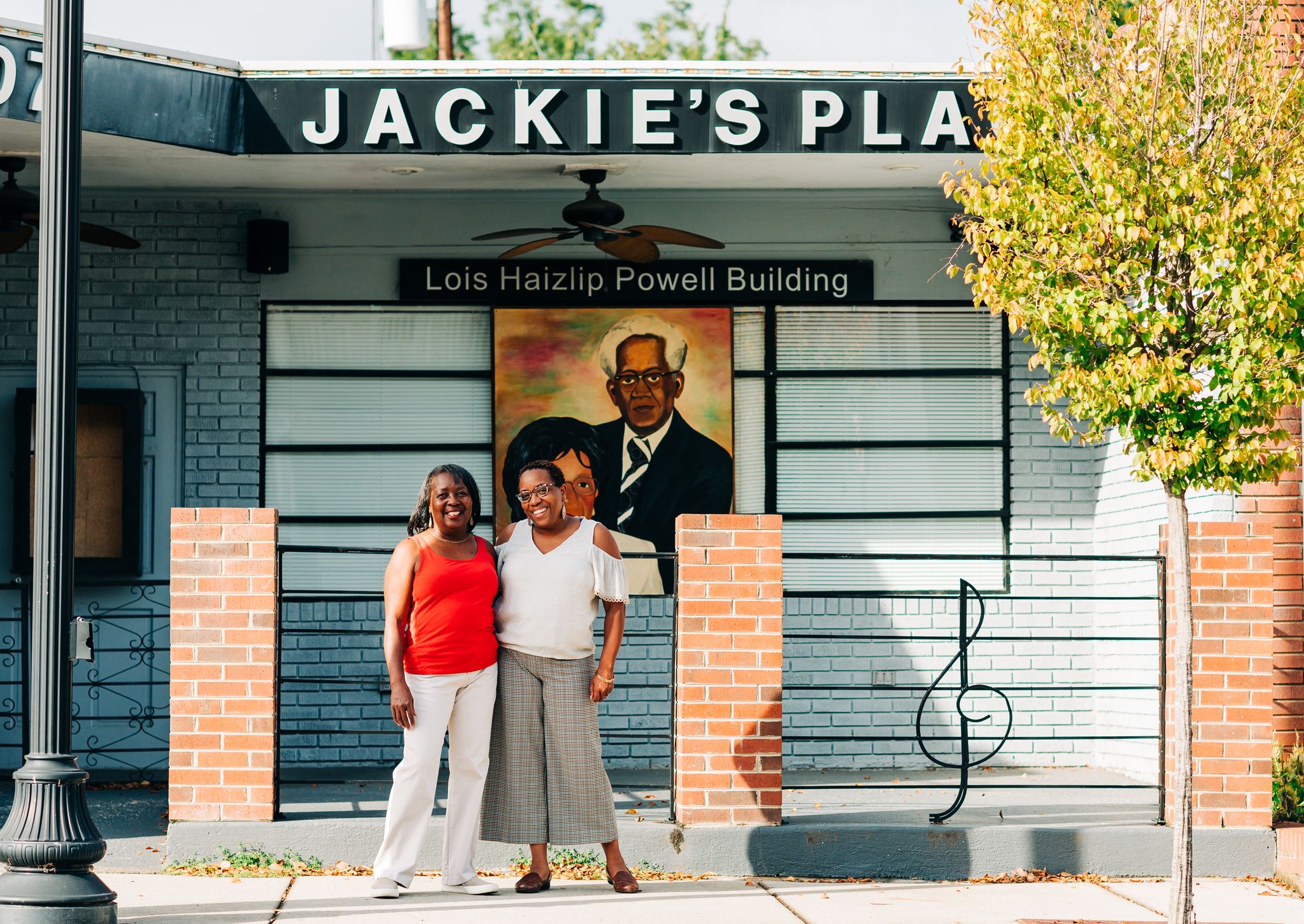 Raynetta Jackson and Rishaunda Moses stand outside of Jackie's Place.

“Oh man, that was the place to go!” she recalls, laughing now. “Everyone wanted to go to Washington Terrace Park.”

And if there was one person who loved to dance, it was Raynetta’s mother, Jackie Haizlip. Jackie, one of three daughters born to Louis and Mattie Haizlip, always had a knack for two things: working hard and having fun. As a single mother, Jackie put herself through nursing school at North Carolina A&T State University in the 1960s and became a registered RN. But even as a nurse, she was always on the lookout for new ideas. An entrepreneur at heart, Jackie began many businesses over the course of her life, including a trucking company, a limo service, a makeup business, and more. But in 1994, Jackie moved back to High Point, her hometown, to assist her sister, Lois Haizlip Powell, in running the family business, Haizlip Funeral Home.

And it was after this move that Jackie and her sister, Lois, began doubling down on the efforts to preserve and serve the community that gave them their start.

“That was my mom’s heartbeat,” Raynetta says, about her mother’s efforts to restore Washington Street. “It goes to show how much she wanted to obtain and revitalize these buildings as best she could and not just let them sit empty, but to make sure that something was going on.”

Lois purchased one of the buildings and created the Washington Drive Resource & Enrichment Center, a space to help mentor and invest in the youth growing up on Washington Street. After Lois passed away in 2011, the work she was doing was largely picked up and continued by the efforts of Jakki and Corvin Davis, founders of D-UP.

“Aunt Lois’ dream was realized, even though she didn’t run it herself,” says Rishaunda Moses, Raynetta’s daughter and Jackie’s granddaughter.

So as the work of youth mentorship continued next door at D-UP, Jackie was faced with what to do with the former location of the Resource & Enrichment Center. She had acquired several properties that she was able to offer to D-UP to use and revitalize, but the Center remained an open possibility. After some brainstorming, Jackie decided how she wanted to use the space. Her idea was reminiscent of the memories of dancing and enjoying jazz music at Washington Terrace Park. Jackie’s Place, a live music and events venue was born.

“Jackie’s Place was just her last entrepreneurial effort,” Rishaunda says, remembering her grandmother’s enterprising spirit. “She wanted this community to have something that was beautiful.” 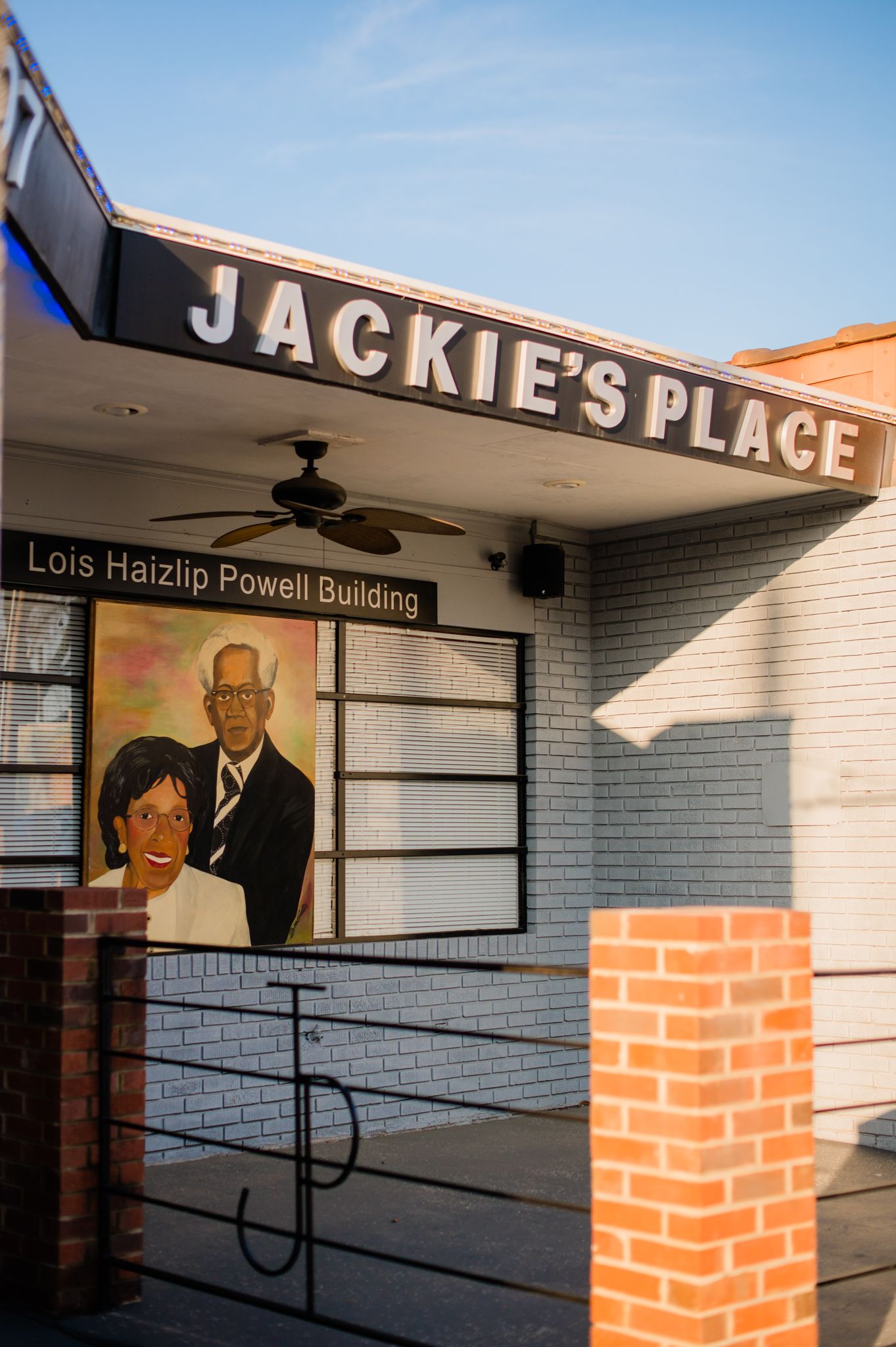 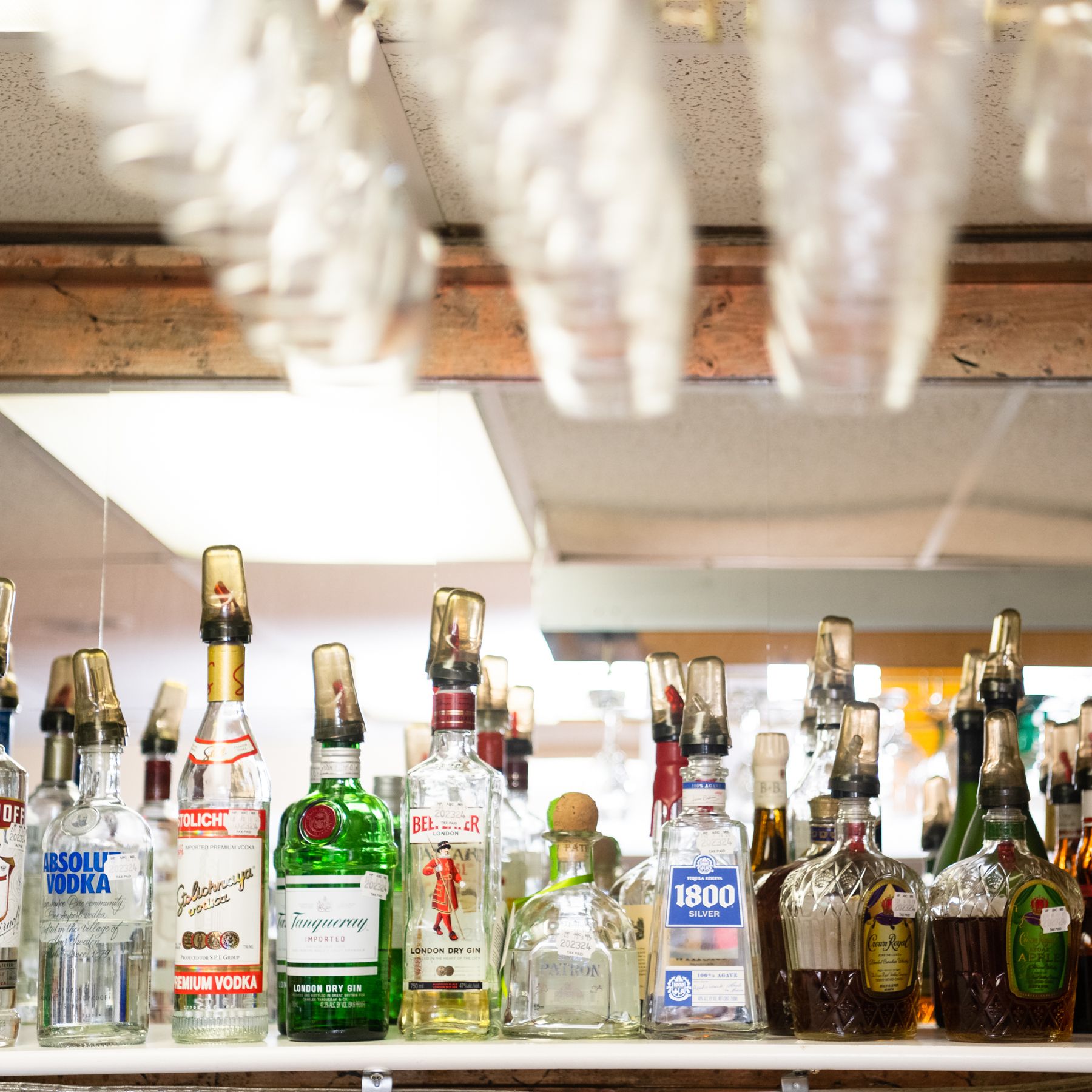 “You have to put a label on a business,” Rishaunda explains, citing that for business purposes, Jackie’s Place is recorded as an event venue. “But she wanted it to be a gathering place.”

Jackie’s goal was to make the venue cozy and inviting, small enough to feel intimate and big enough to host community-building events. She wanted it to be a place held to excellent standards, something the whole community could feel proud to call their own.

Drawing from the inspiration and legacy of Black artists, musicians, and entertainers who used to frequent Washington Street, Jackie had the vision to create a new kind of live music venue for the next generation of culture creators. 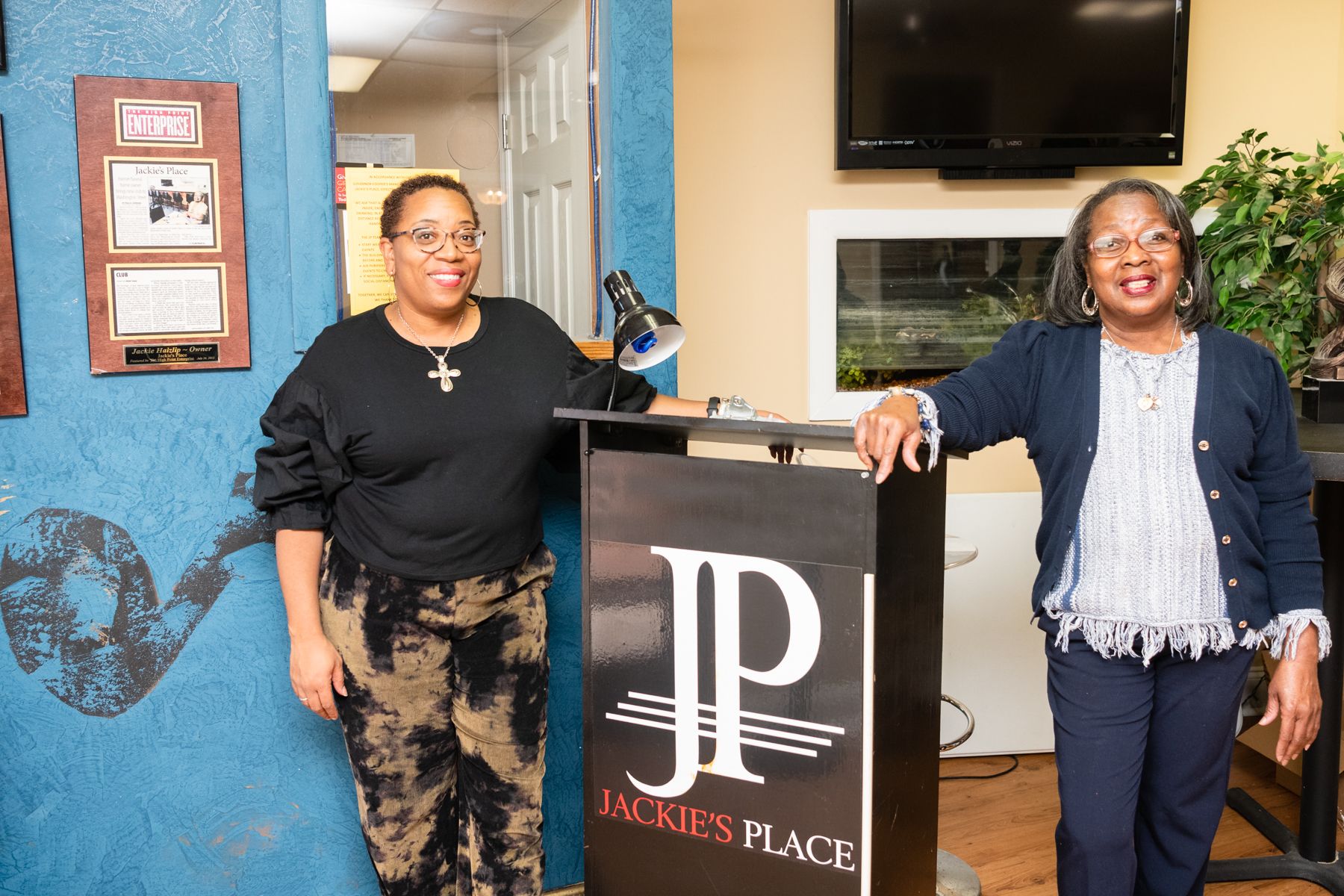 "That's something we would love to continue in her memory – having spaces where burgeoning businesses can come in and get a foothold to grow,” Rishaunda notes. She points out that between Jackie’s Place, Penn Griffin School of the Arts, the Ritz Theatre, and John Coltrane’s childhood home, there is no shortage of arts and musical inspiration right on Washington Street. “We just really see, Washington Street as a prime area where arts, culture, and business development can happen.”

Inside the walls of Jackie’s Place, that creativity is evident.

“Creativity is such a part of the heart of this community,” Rishaunda says of Washington Street.

Artwork, painted by High Point-based artist, Anthony Belton adds visual creativity to the space. And at the entryway of the venue, there is an homage to Ellis Haizlip, Jackie Haizlip’s first cousin who was an acclaimed television personality and producer of the public television program, “SOUL!” which aired in the 60s and 70s. The Haizlips were no strangers to musical stardom and fame, as Ellis Haizlip welcomed musical acts like Pattie LaBelle, Stevie Wonder, Earth, Wind, and Fire, Gladys Knight, and more to his show. 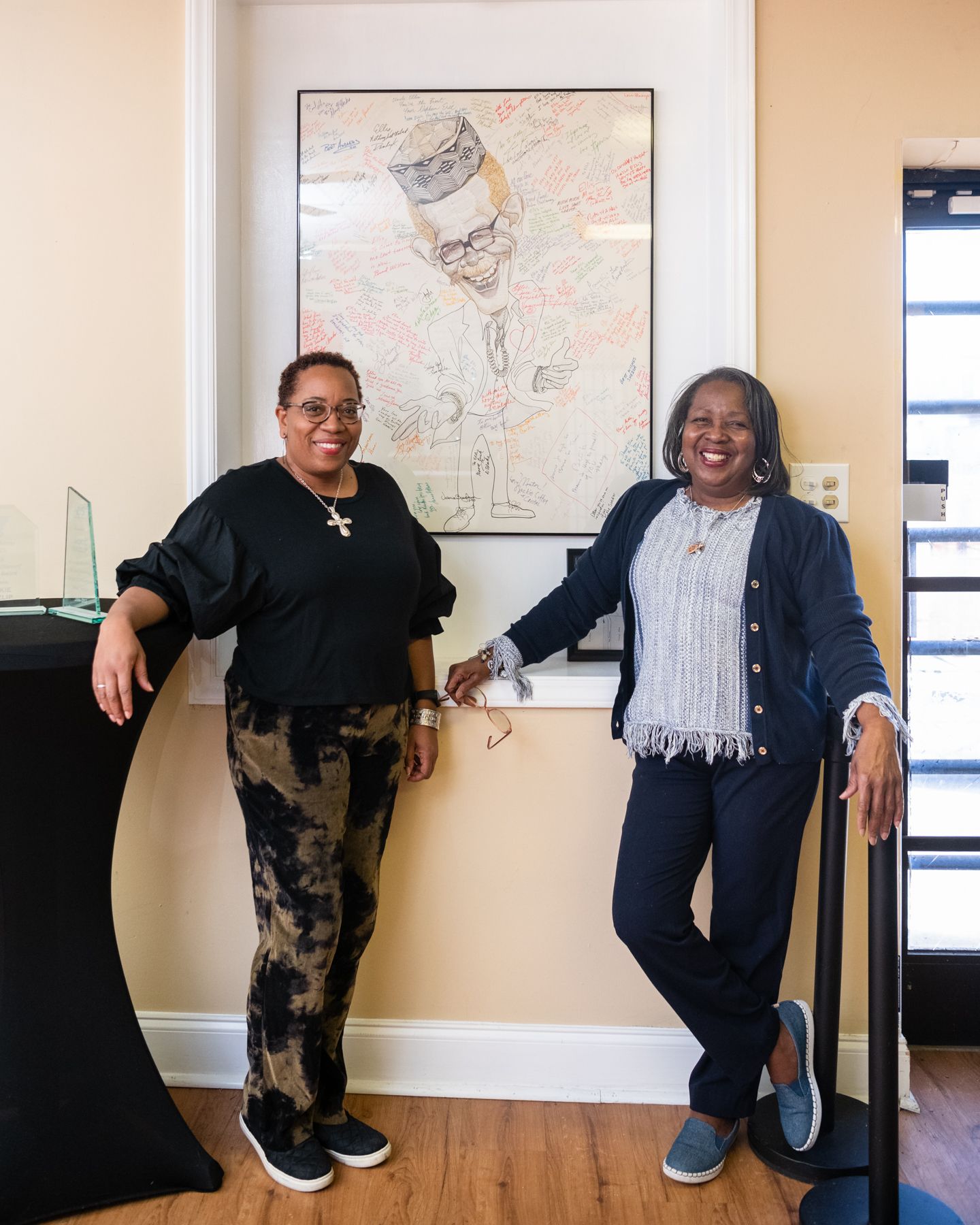 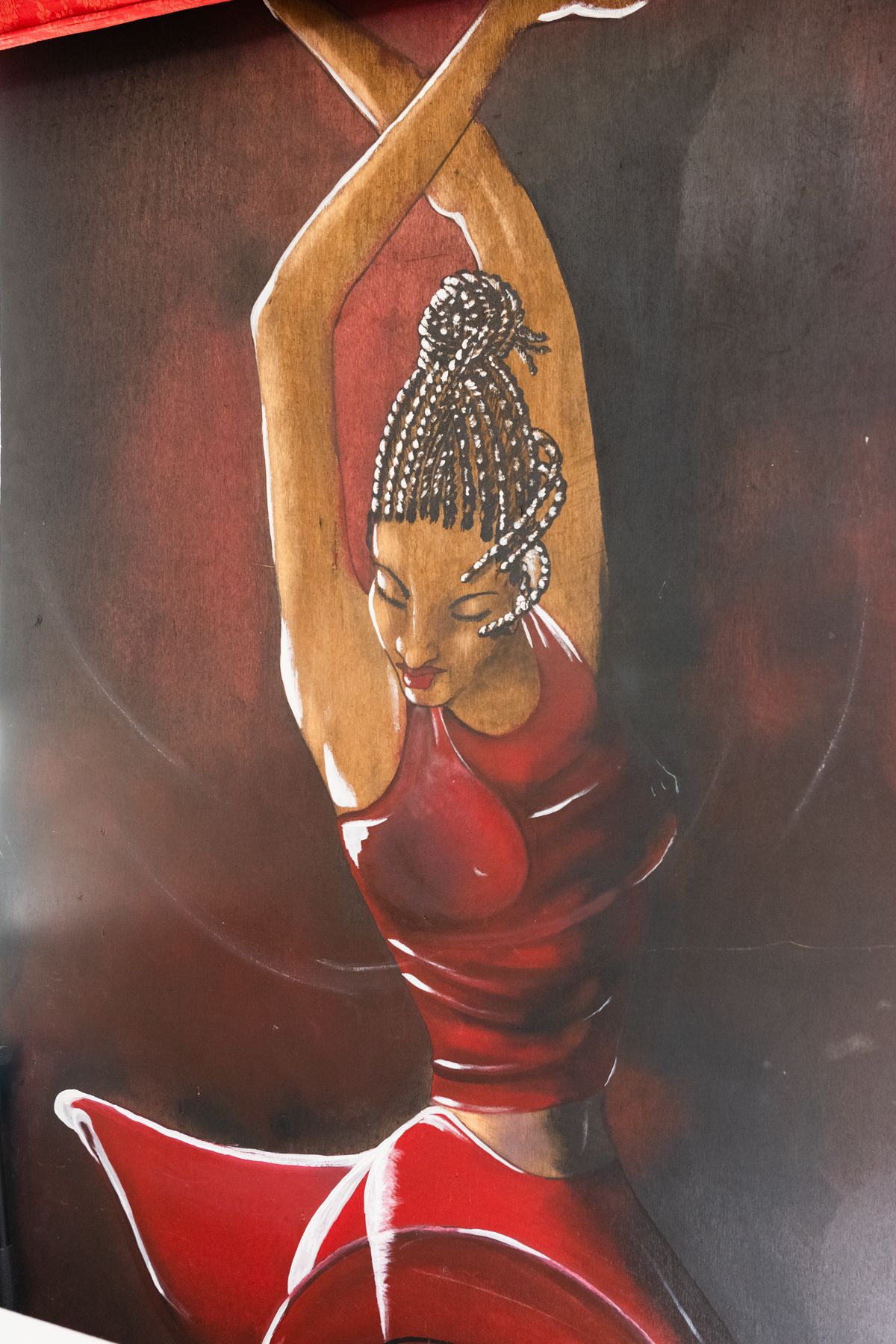 For Jackie though, it was enough to generate that sort of creative spirit and togetherness right on the street where she grew up. Rishaunda calls Jackie’s Place her grandmother’s “happy place.” She laughs, remembering how her extroverted grandmother put an aquarium in the space.

“I think she got those fish intentionally just so she could come up here every day!” Rishaunda jokes.

At the center of the dance floor, Jackie could often be found, dancing along to one of her favorite line dances, “Shake a Tail Feather.”

“People would just be sitting around, and Mama would say, ‘Child, get up on this floor and let me show you how to shake a tail feather!’” Raynetta fondly remembers with a smile. 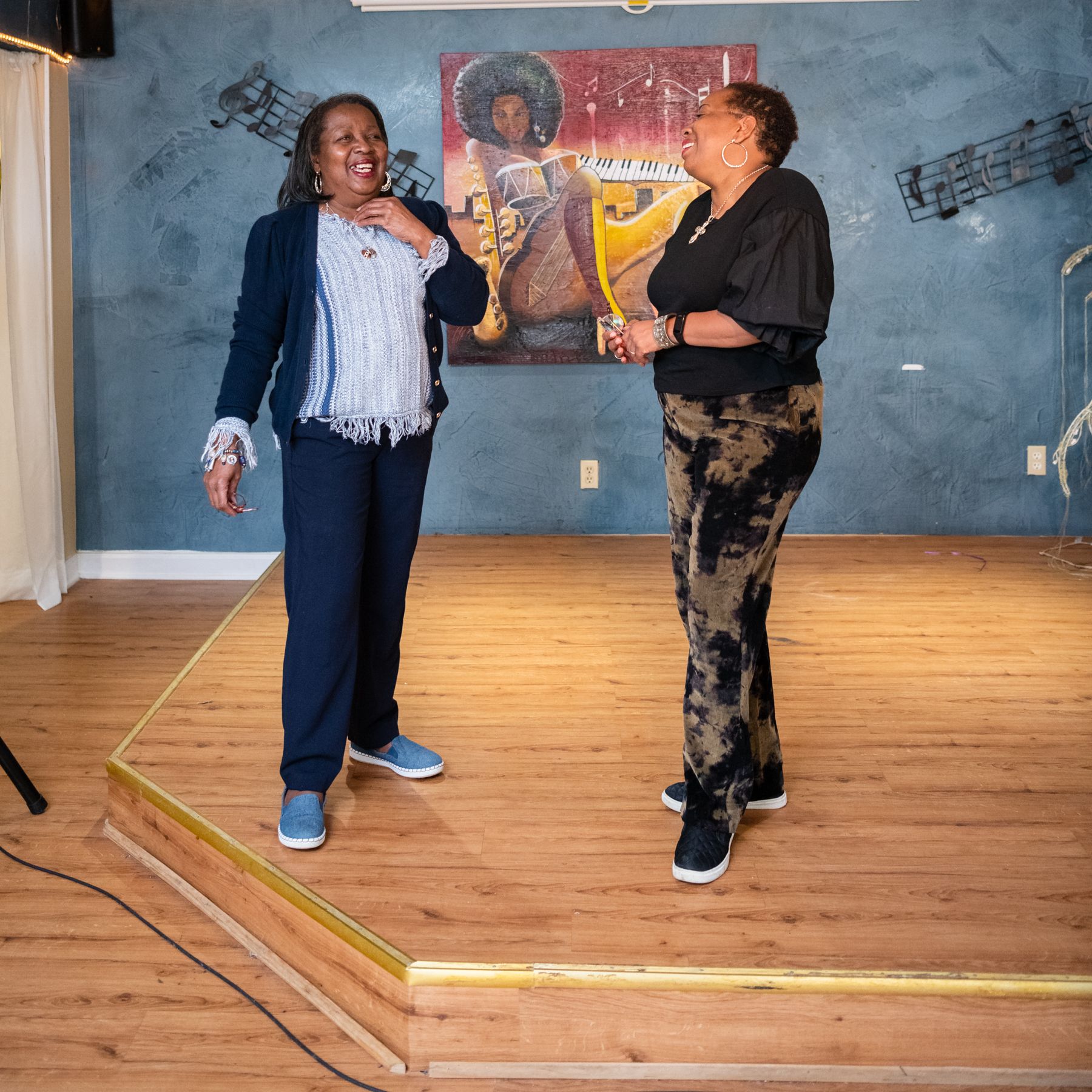 Raynetta and Rishaunda stand on the stage at Jackie's Place.

Today, Jackie’s Place continues, even after its matriarch’s passing in 2019. As they continue to find ways to allow for safe gathering on the heels of the COVID-19 pandemic, Jackie’s Place is opening up their calendar for bookings – hosting everything from birthdays to anniversary parties, to work retreats, to baby showers, to high school reunions. With an on-site bar and in-house DJ, they also allow patrons to bring in catering and additional décor. Their hope is to continue building up Jackie’s Place in the community by hosting events during High Point Market, the John Coltrane International Jazz & Blues Festival, and partnering with other creative organizations like the Home Grown Music Series, founded by Washington Street Business Association chairman, Bryon Stricklin. 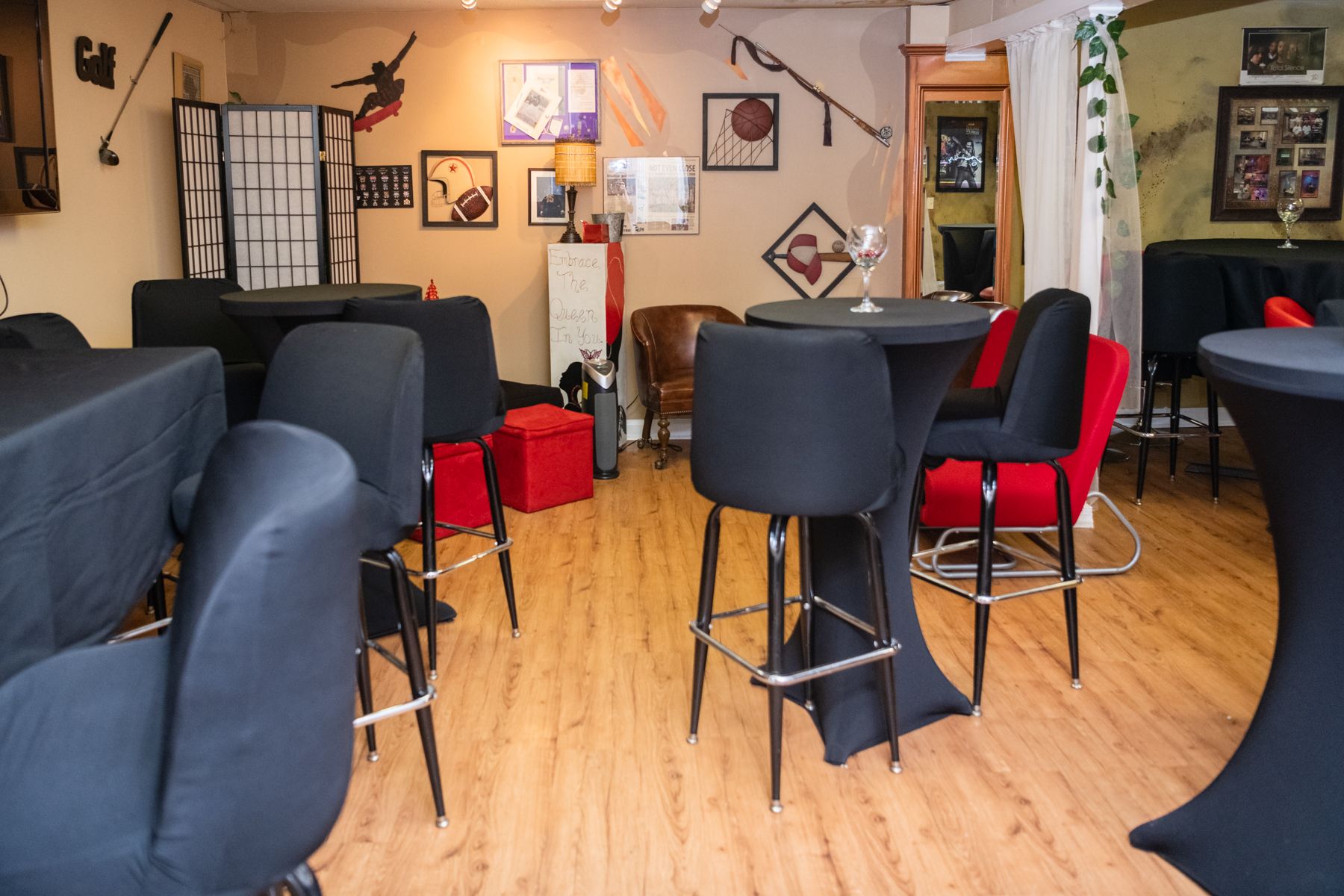 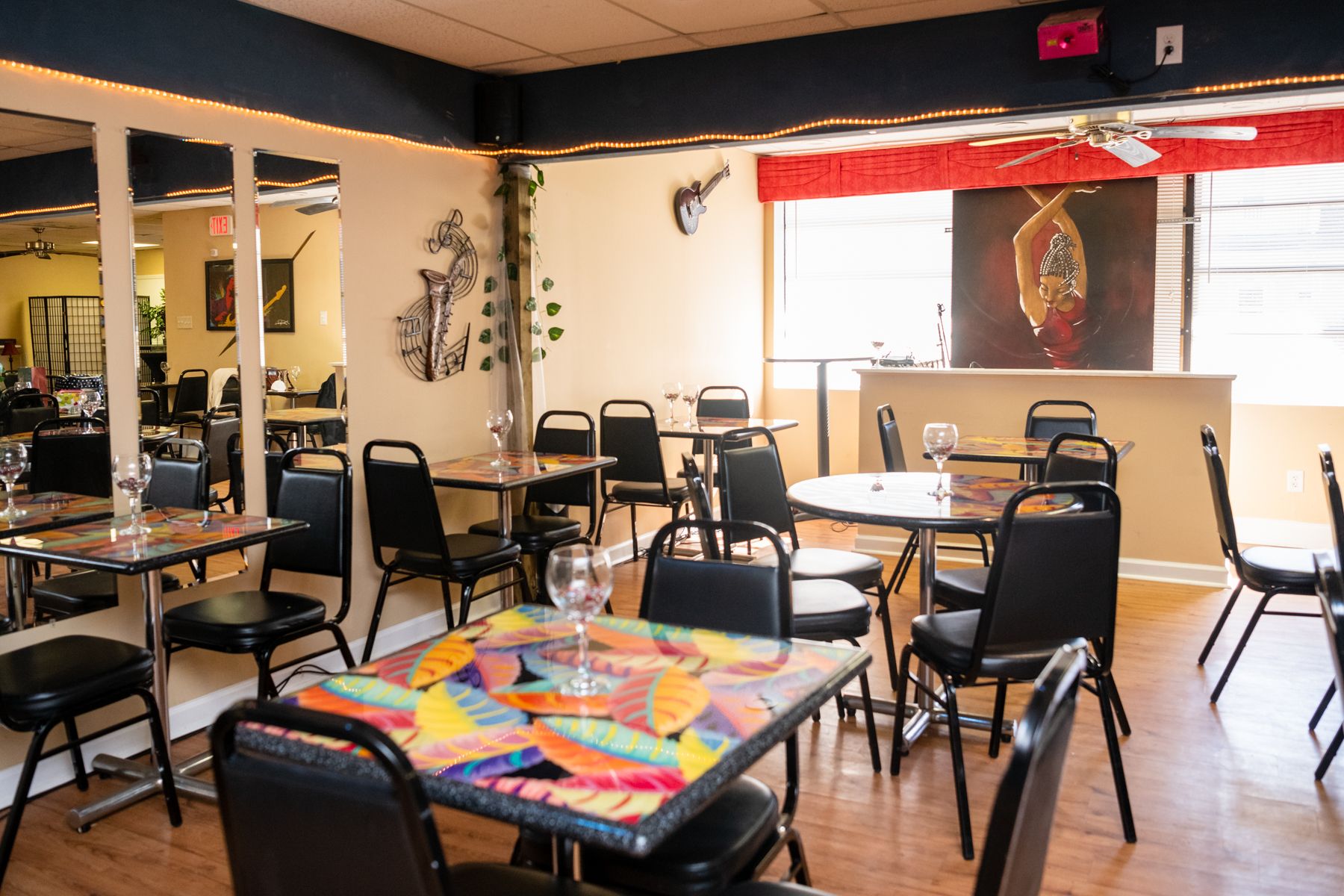 “People are ready to celebrate again,” Rishaunda says, noting how much they have missed the gatherings that her grandmother used to love. “We have to take opportunities to express ourselves creatively and connect with people in a healthy way. This [pandemic] has been such an isolating period of time and to have a place to come and enjoy music and enjoy being with other people is really important.”

“That sums up my grandmother. The things she touched she made better.”

Rishaunda and Raynetta are committed to continuing the work of community growth and revitalization that they saw modeled by Jackie, Lois, and Louis Haizlip. Both are involved in the community with a wide variety of organizations like Growing High Point, the Greater High Point Food Alliance, the Washington Street Neighborhood Association, D-UP, and the Alpha Arts Club (High Point’s oldest African American organization, founded in 1924 as a club for Black women involved in business and the arts).

“We carry on in her memory and her honor,” Rishaunda says. And just like Jackie Haizlip, Raynetta and Rishaunda want to leave Jackie’s Place, Washington Street, and High Point as a whole, better than they found it.

“That sums up my grandmother,” Rishaunda reflects. “The things she touched she made better.”

Discover more about Jackie's Place or inquire about booking an event!

Keep up with Jackie's Place online!