We don’t want to spoil the magic, but want to give you a “head’s up,” that inside of every mascot head, there is a person playing a character, beloved by fans young and old. Not to mention…behind every mascot there’s a designer, and if you’re lucky, that designer might just be Randy Carfagno. And the High Point Rockers are lucky enough to have Randy, of Randy Carfagno Productions, as the designer for their new mascot!

Randy has worked with productions, puppeteers, companies, and teams from all over the world. From Calvin Klein to SNL, from the Macy’s Day Parade to the Washington Nationals’ “Big Head” presidents, Randy Carfagno has created characters, puppets and mascots to embody some of the world’s most famous groups. And now the High Point Rockers will be added to that world-renowned list!

Meet the Rockers new mascot (designed and crafted by Randy himself), the Rockin’ Horse! Stephanie Stierle, the High Point Rockers’ mascot consultant, suited up as the mascot to show fans a preview of what they’ll get to experience in a few weeks at the first game! 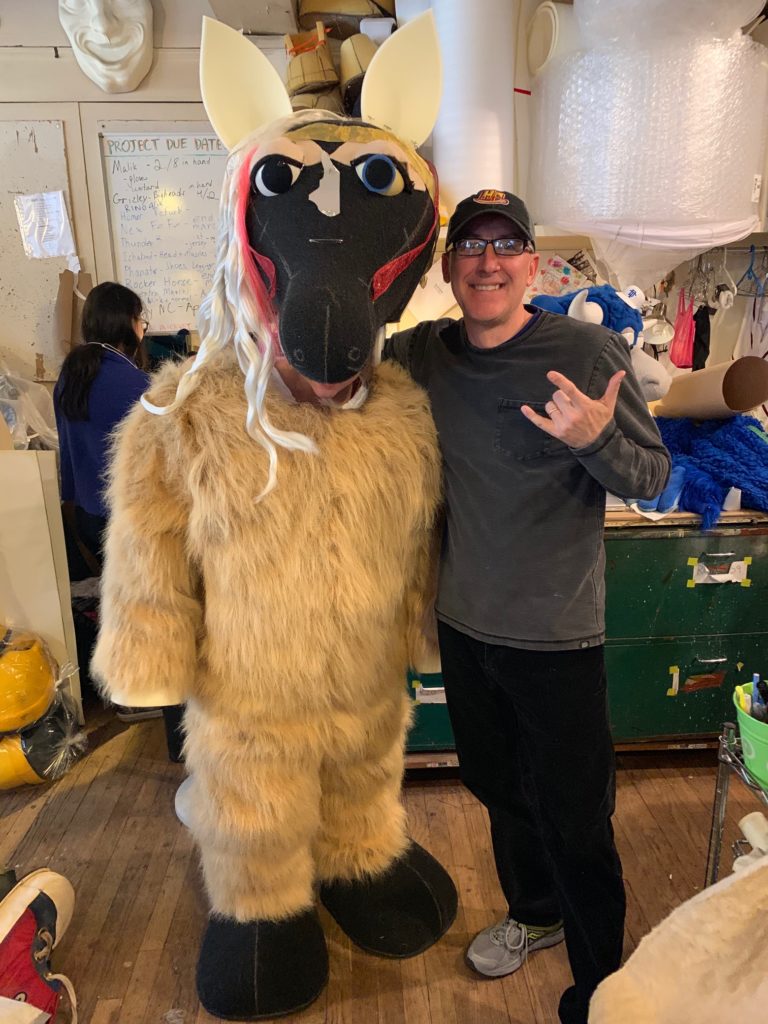 We were lucky enough to speak with Randy about the process behind developing this unique mascot. He explained how much the character has evolved since its inception, from an actual rocking horse, to a play on a rocking chair, to a rockstar, to the rockin’-horse this loveable mascot is today. 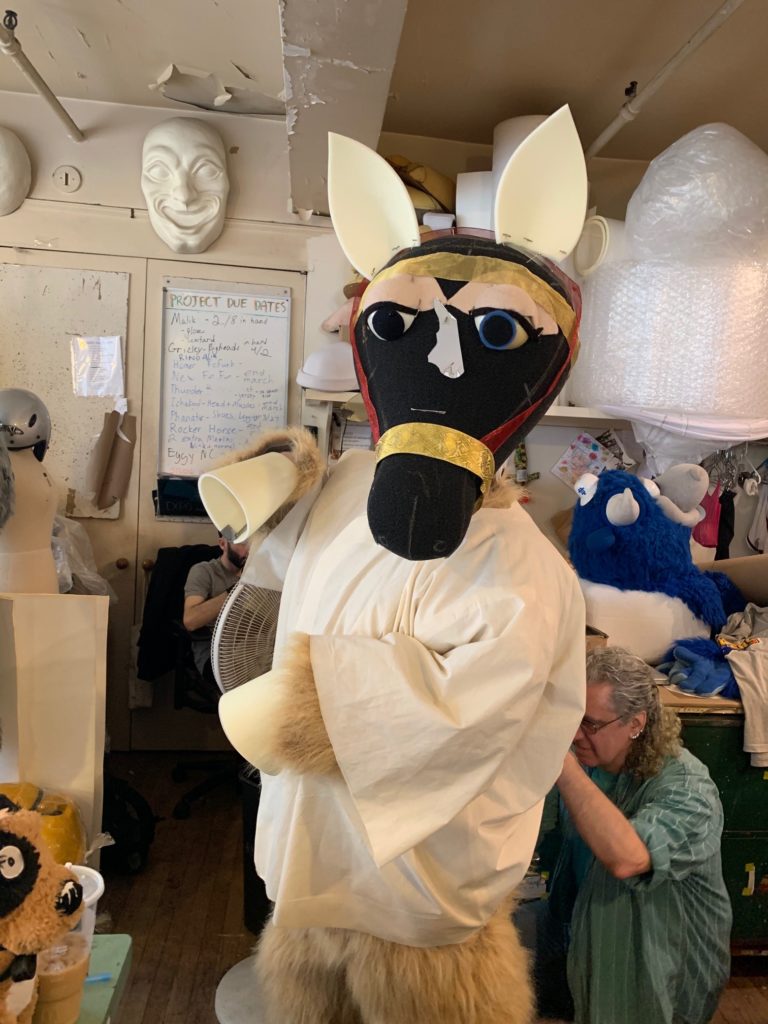 “Speaking with Ken, it boiled down to the fact it would be better to do an actual horse who is friendly and more horse-like,” Randy explains. Randy and Ken Lehner, High Point Rockers’ president, met years ago, when Ken hired Randy’s company based out of New York City to repair several mascots for him. The connection has remained ever since, so it was an obvious choice for Ken to employ the services of Randy Carfagno Productions for the Rockers’ debut mascot.

Randy Carfagno Productions is a four-person operations, where no corners are cut and craftsmanship is prized. Randy himself logs sometimes 17 to 18 days in a row of being in his studio and shop with no days off, because he and his team are committed to make quality products for their clients. He boasts of a mascot that has a lasted a team nine years before any updates needed to be made.

For the High Point Rockin’ Horse, no expense was spared to bring the mascot into reality. For example, on the horse’s mane, Randy used a high-end synthetic mane fiber, to make the mane look, feel, and move like a real horse’s mane. And because that fabric couldn’t be dyed, Randy crafted his own paint to make sure the mane achieved the Rockers’ signature colors.

But all this work to make the mascot perfect doesn’t mean that Randy and his team won’t make updates to spice up character a little bit along the way. In fact, this is one of the best parts of mascot building to Randy: the endless abilities to customize a character as often as the client wants.

“He won’t be the exact same character,” Randy says about the new Rockers mascot. “He’ll shift and morph into new characters.” Randy shared that there are already holiday-themed costumes for the Rocker horse, as well as parts of his tail and costume that can be removed and interchanged with other pieces. While the mascot will keep his identity as the Rockers new beloved embodiment, as a fan, you’ll want to check out little adjustments to him whenever you’re at the park! 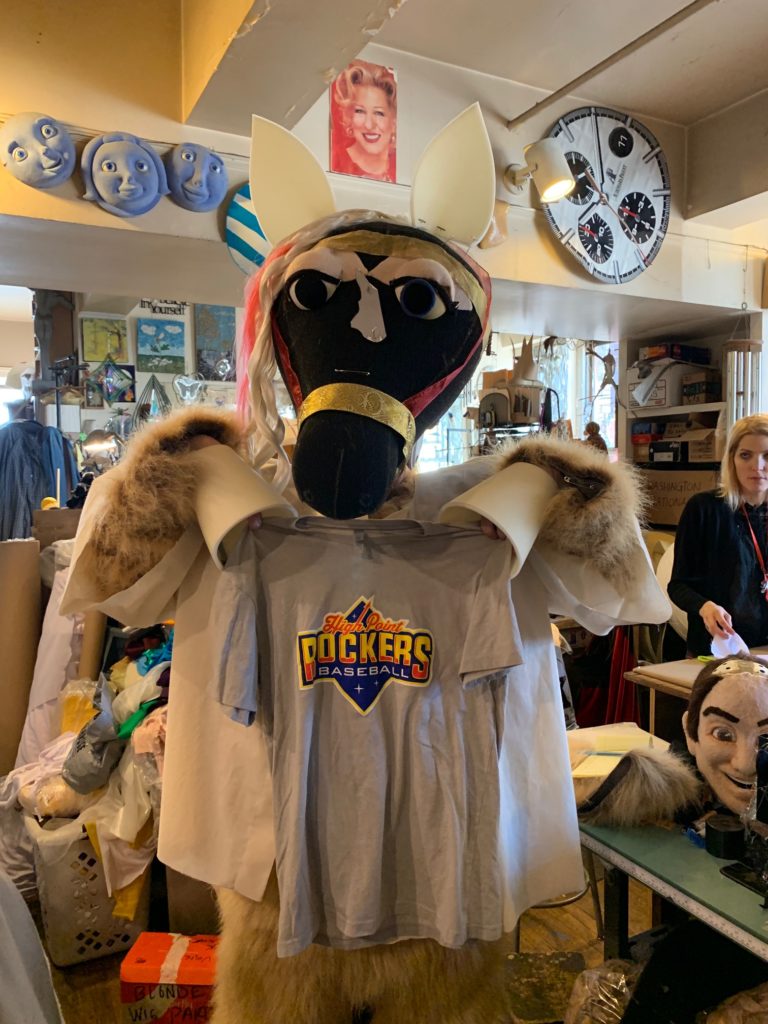 Randy let us know a few secret “Easter eggs” to look for on the mascot. For example, there’s 12 of something (or is the actual number 12??) somewhere on the mascot, paying tribute to North Carolina’s spot as the twelfth state in the Union.

“We also branded the horse with a particular brand to show that he’s from the Carolinas!” Randy says. “He moves fast so you might not be able to catch it right away!” But Randy encouraged us and the fans to keep their eyes peeled, and maybe tilt their head sideways, to find all the hidden secrets to what make the High Point Rockin’ Horse one-of-a-kind!

Because for Randy, mascots are more than just goofy costumes at an event; they are part of the brand, story and experience. And they have been that for almost his whole life.

When he was just five years old, Randy became fascinated with puppets. His mom let him buy little rubber figures at a shop, cut them up, and reassemble them into his own marionettes using string and popsicle sticks for controllers. From there on out, Randy was hooked on puppeteering. He worked with people like Bil Baird Marionettes (these are the iconic Sound of Music marionettes from the goatherd scene!) as well as household favorites like the Muppets. By 1983, he moved into the mascot world, working for companies like Disney. He has worked for more than 14 different sports teams, designing mascots and “Big Heads” (like the presidents at the Washington Nationals).

And now Randy can bring just about any artistic vision to life, from a Phillie Phanatic tuxedo to the Ottawa Senators hockey team mascots dressed as Charles Dickens’ A Christmas Carol characters.

“We can design anything, but we have to know what is secretly inside someone’s mind,” Randy says. “Part of our job is brain surgery… to go into that brain of yours and figure out what goes on with your brand and what will make you smile.”

Randy Carfagno’s “brain surgery” that brings mascots and characters to life for fans and teams has been making people smile for more than 40 years, so we feel pretty lucky to have our Rockers mascot crafted and designed by Randy and his team.

“We want people to love him as much as we do!” Randy says on the High Point Rockin’ Horse. And it’s clear that with all the creativity and intentionality that Randy, Ken, Stephanie, Randy Carfagno Productions and other creative minds put into designing our mascot, he’ll become a well-loved part of the High Point community in no time!

Now it’s your turn to be part of that creative team!!  Our High Point Rockin’ Horse doesn’t have a name yet and this is where YOU come in.  The Rockers will have a naming contest so you can be part of history.  More details coming soon so stay tuned for more contest details!