There is no doubt that High Point University has one of the most beautiful campuses on the East Coast, if not the nation. Over the past few years, Dr. Nido Qubein and other high-ups at HPU have been working diligently to beautify the campus, and boy have they been successful – this campus has been crafted to inspire their students daily. One of the many ways that HPU visionaries aim to inspire students is filling the campus with beautiful bronze statues of significant figures from American and World history. Each of those statues, voted on by students, is there to remind the students of all that’s happened in history as well as give them the mindset that – maybe one day—they too could make an impact like one of those figures.

The man behind the bronze:  All of the beautiful statues on campus are created by North Carolina sculptor, Jon Hair. Hair began his artistic career as a fine arts major at Ohio State University followed by the Columbus College of Art and Design. He began his sculpting career in 1999, and since then, has been commissioned all over the United States for major public art pieces. Currently, HPU is home to 23 of his sculptures around campus.

We have put together our top 10 list of our favorites to inspire you to make a trip to campus to see them for yourself! And, in case you slept through history class, we have included their stories as well.  While you’re on campus, be sure to check out the other amazing sculptures that call HPU home. 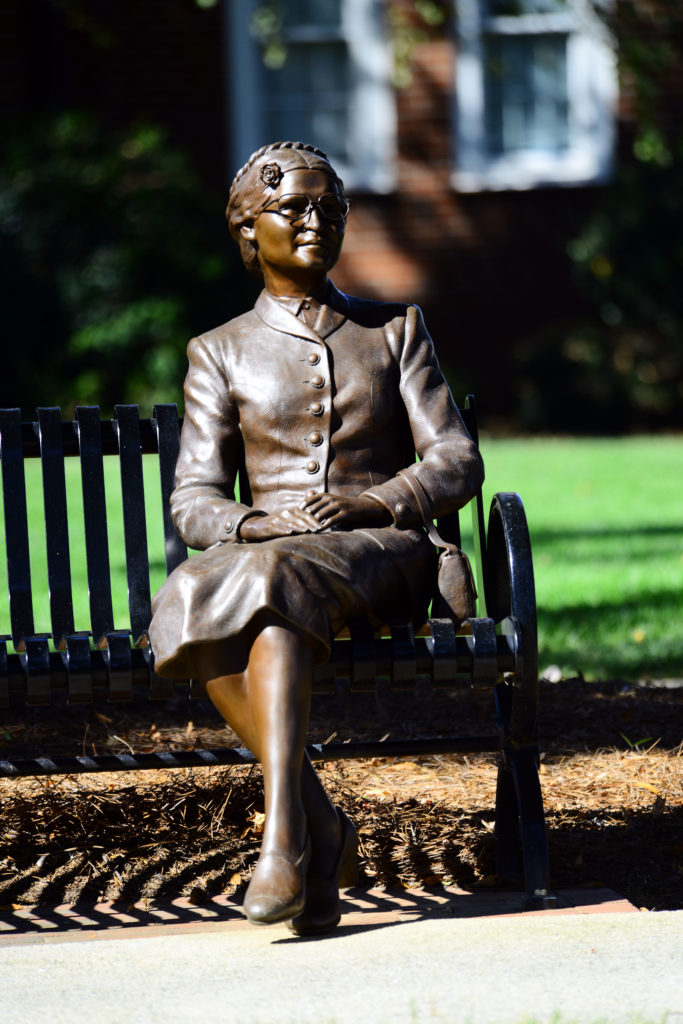 Rosa Parks was born in Tuskegee Alabama in 1913 and died in 2005. She is remembered as the seamstress who would not give up her bus seat to a white man. Her action provided the catalyst for the Montgomery Alabama bus boycott, one of the first salvos in the American civil rights movement. 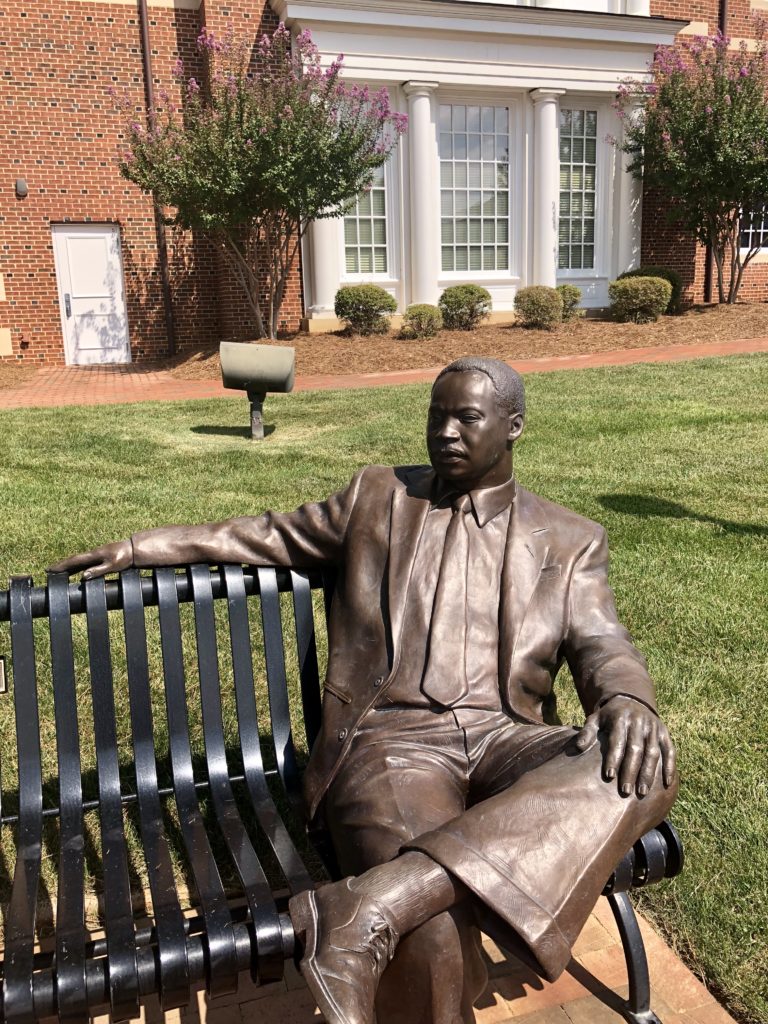 King was born in 1929 in Atlanta, Georgia. As a young man he decided to follow in his father’s foot steps to become a minister. While pastoring in Alabama, he led the Montgomery Bus Boycott that finally desegregated Montgomery’s transit system. After the boycott he formed the Southern Christian Leadership Conference, a catalyst that eventually helped the passage of the Civil Rights Act in 1964 and the Voting Rights Act of 1965. 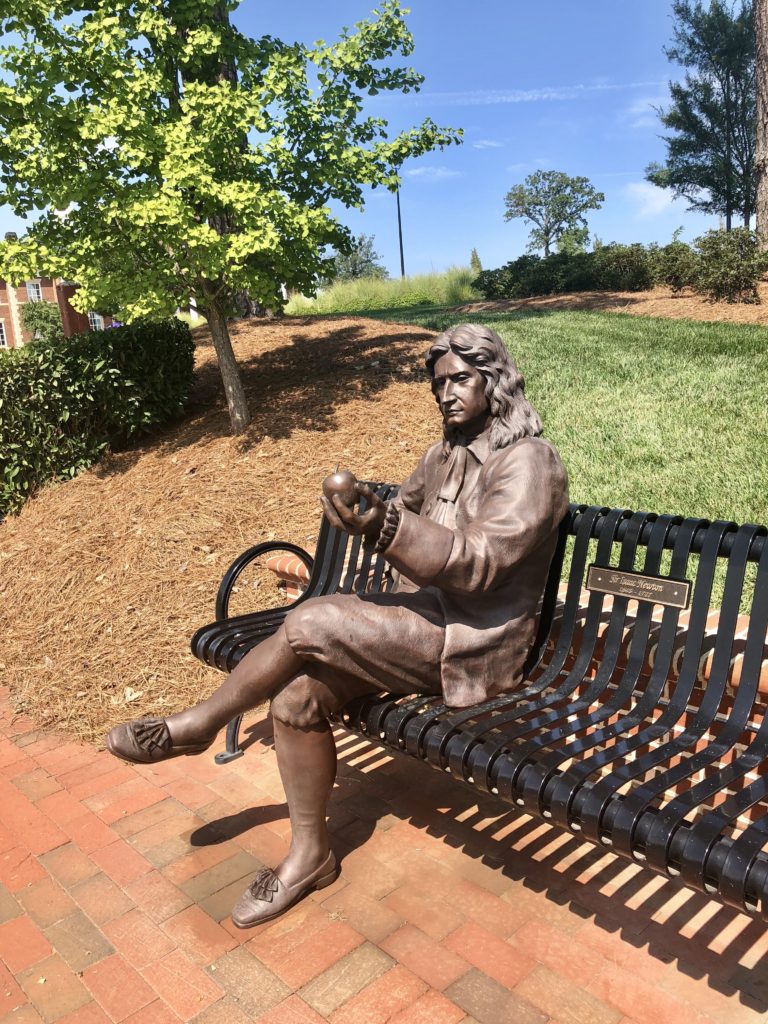 Isaac Newton was one of the greatest scientists of all time and a key figure in the scientific revolution. He was born in Woolsthorpe England in 1643 and was later educated at Cambridge University. His principles on the laws of motion and universal gravitation would influence science for years to come.

Amelia Earhart was the first woman to fly alone across the Atlantic Ocean, and one of the most celebrated aviators of all time. Amelia Earhart was born in Atchison, Kansas in 1897 and learned to fly against the advice of her family in 1920. Her famous flight across the Atlantic took place in the record time of 14 hours 56 minutes on May 20-21, 1932. During her lifetime, Earhart was a major advocate for women in the field of aviation. In July 1937, Earhart set off to fly around the world. Although she completed two-thirds of her journey, tragically, her plane disappeared over the Pacific Ocean. Her exact fate remains one of the great mysteries of our time.

Mother Teresa, was born in 1910 in Albania (now Macedonia). She was the founder of the Order of the Missionaries of Charity, a Roman Catholic congregation of women dedicated to helping the poor and destitute of any faith. Her mission was to help the poorest and weakest in India. Her community took in the sick and the destitute that society shunned. Supplicants with diseases such as tuberculosis, AIDS or leprosy were cared for. Mother Teresa went on to establish special homes for alcoholics, battered and abused women and drug addicts.

She received many awards during her lifetime, including the Nobel Peace Prize. When she died of a heart attack in 1997, there were over 4,500 Sisters of the Missionaries of Charity worldwide, serving in over 500 missions in 120 countries. After her death, the process began to declare her a saint, and she was beatified by Pope John Paul II in 2003.

Gandhi was considered to be the father of his country for his leadership of the Indian movement against British rule. He was born in 1869 and after earning a law degree in England, he went to South Africa and encountered prejudice against Indians that stirred his political abilities. He led efforts to protect Indians’ rights and developed a method of nonviolent protest. Finally, in 1947, India achieved freedom, though Gandhi continued to campaign for peace between opposing groups of Indians. He died in 1948 after being shot by a Hindu fanatic. 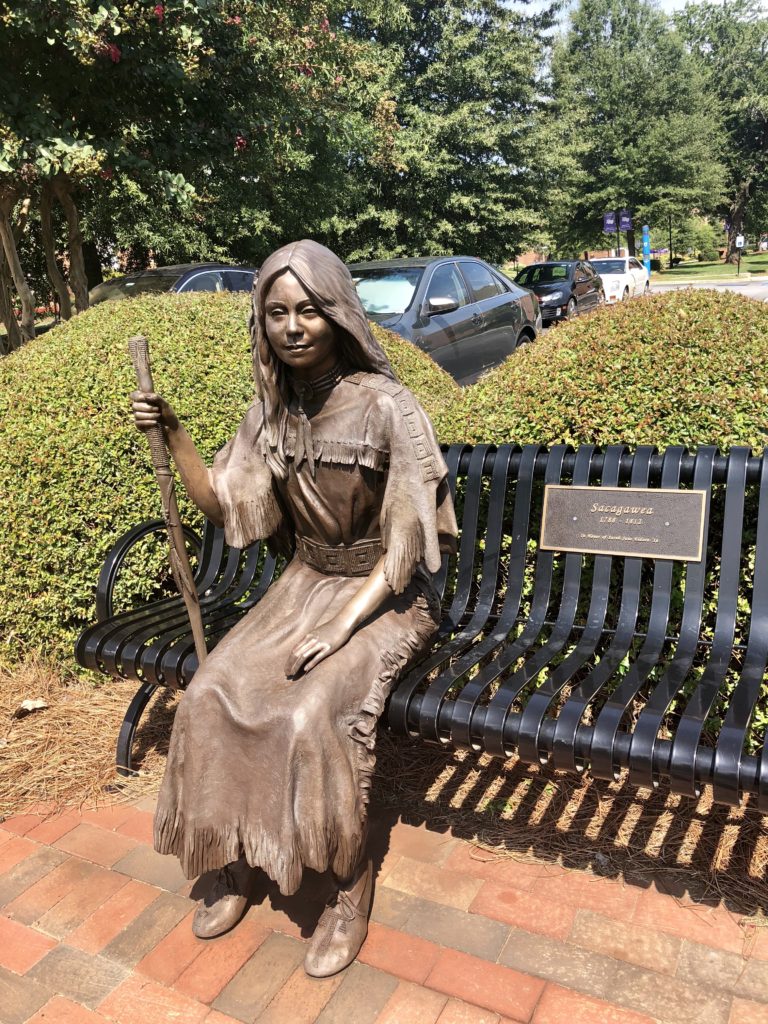 Sacagawea, born circa 1788, was the Shoshone interpreter and guide who accompanied Meriwether Lewis and William Clark on their epic two-year journey across the continental United States. Setting out in 1804, their mission was to cross the interior of the continent, and find out what lay between the known and settled areas of the east and west coasts. After the expedition was over, Sacagawea went to live among the Comanches, and she died in 1812. Sacagawea has been memorialized on many statues, postage stamps and monuments. In the early 20th century, she was widely adopted as a symbol of women’s worth and independence. 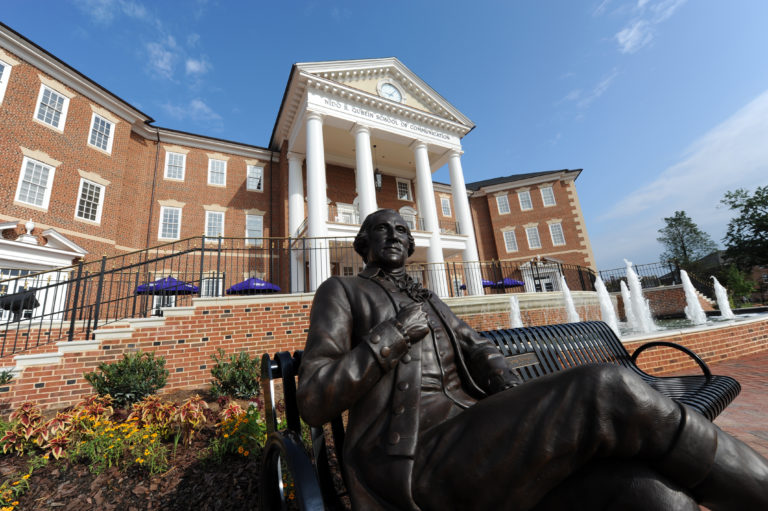 Washington was born in 1732 in Virginia. In the 1760s and early 1770s he became more and more upset about England’s treatment of the colonies, eventually declaring himself ready to lead troops. As a delegate to both the First and Second Continental Congress, he proved himself invaluably knowledgeable on military matters, and he was unanimously elected commander in chief of the colonial military forces. He was later unanimously elected as the first president of the United States. Washington acted cautiously and with neutrality during his presidency, but refused a third term after his first 8 years in office. He died in 1799 and is remembered as the father of his country. The new capital was named for him; later a state was named in his honor.

The first woman to win a Nobel Prize, Marie Curie won two of them in different fields. Fascinated by and excelling in her studies, she met and married the chemist, Pierre Curie, forming the partnership that would achieve significant results. Together, the Curies discovered the elements radium and polonium and won the Nobel Prize for Physics in 1903. After the sudden death of her husband, Madame Curie devoted herself solely to her work, becoming the first woman to teach in the Sorbonne. In 1911, her efforts paid off a second time when she was presented the Nobel Prize for Chemistry for the isolation of pure radium. Later, Curie went on to contribute significantly to developing use of X-rays. Although Marie Curie died in 1934, her research lives on today in the work of nuclear physicists and chemists the world over. 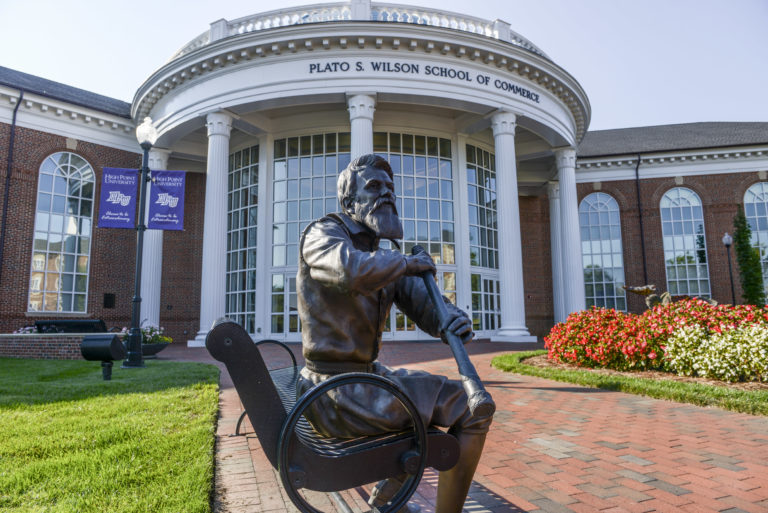 Often called the “Father of Modern Science,” Galileo Galilei was born in Pisa, Italy in 1564 and died in 1642. During his lifetime, Galileo developed the scientific method, and made essential contributions to the sciences of astronomy and motion. He was also a great natural philosopher who changed the study of nature from mere description to the use of experimentation. Galileo is perhaps best known for his development of the telescope, and his discoveries of heavenly bodies, such as the four moons of Jupiter and the phases of Venus, which gave indirect support for the Copernican theory.