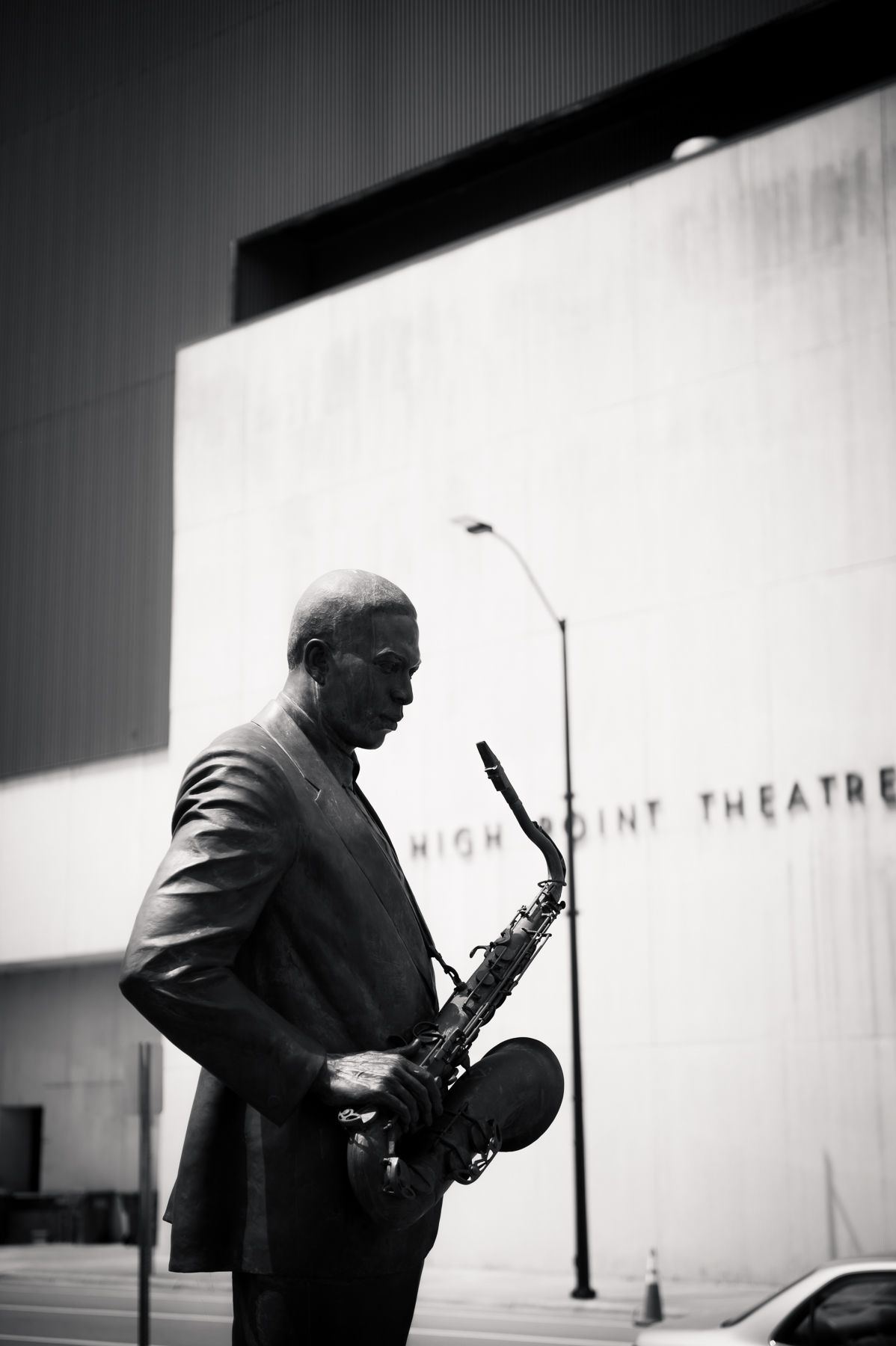 If you ask anyone in the jazz music scene to name an influential music leader, there’s a high chance John Coltrane’s name will come up. And if you ask any of those folks where the legend John Coltrane first got his start, they’d most likely point to Philadelphia. That’s where Joe Williams, Director of the John Coltrane International Jazz and Blues Festival, would have pointed before moving to North Carolina.

“I’m from Philadelphia, so I always thought of Coltrane from Philadelphia,” Joe says. After growing up in Philly, Joe moved to North Carolina to work for the Federal Deposit Insurance Corporation. Then, Joe learned that while Coltrane’s musical career may have taken off in Philadelphia, his time in High Point shaped his foundational years.

As a lover of music and a music manager, Joe was asked to be part of the board that helped erect the John Coltrane statue in downtown High Point back in 2006. Once that project was complete, Joe began to wonder if there were more ways for our city to honor and celebrate the legacy of one of our most acclaimed citizens, and the idea of the festival was born.

So how did the festival go from an idea to a sought-after jazz mecca for musicians and fans all over the world? To answer that, you have to learn a little more about Joe Williams, and a little bit more about the spirit of John Coltrane. 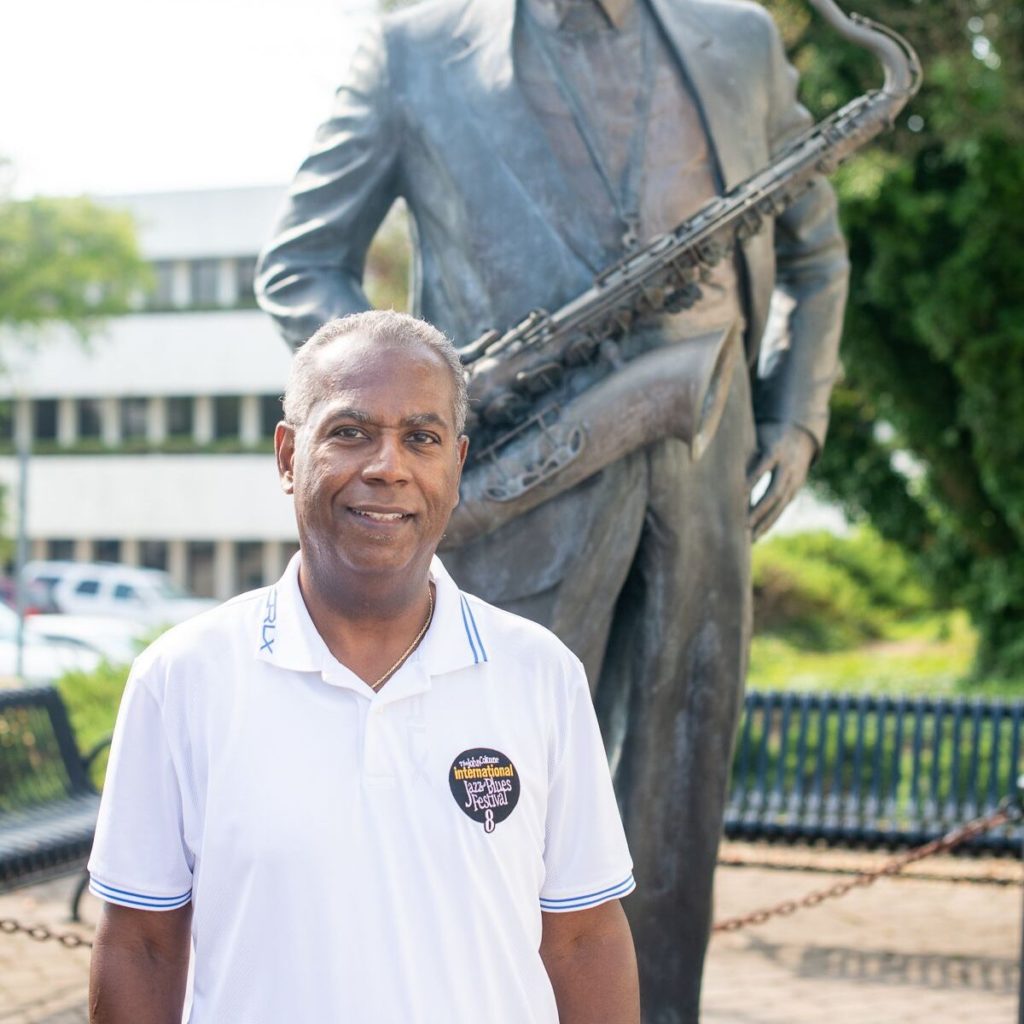 Because while Joe may say the first few festivals were shaky, from the beginning, it was clear that Joe was the right man for the job. Securing talented stars, George Duke and Stanley Clarke, for the second festival was a first for High Point but not for Joe.

“I was always the guy that never wanted to be an artist, but was always pushing the talent,” he says. He remembers a childhood friend, Larry, who he once heard singing in school. Larry became Joe’s best friend, and everywhere they’d go, Joe would encourage him to show off his vocal talent. One of his first jobs, where he began to make connections in the music industry, was at Philadelphia International Records.

In college, he worked in theatre sound and lights, and after booking several shows for his student government association, Joe realized that this is where he belonged. He took a job in North Carolina with the FDIC, but he never gave up on his true passion: the music industry.

What made Joe a successful music manager is what makes him a successful director for the Coltrane Jazz Festival. It’s how he secured headliners like George Duke after only one year of the festival. His secret weapon? Joe knows you’ll never get what you want if you don’t ask. He learned this lesson when he was standing in the office of the legendary Quincy Jones, unannounced and with no appointment.

When a friend of Joe’s asked him to use his talent to help him book a recording contract, Joe says he went on a “mission.”

“I started reaching out to people I knew at the record company, and they would put me in contact with others,” he says. “We decided, we’re going to go out to Los Angeles to get a deal. I had my briefcase and my suit on, and I went to Quincy Jones’ office with no appointment, and I said, ‘I want to see Quincy Jones.’”

Joe laughs, remembering his boldness, the black polka-dotted suit he was wearing, and the receptionist’s amusement at his request.

“The secretary just thought it was so cute,” he remembers. And while Mr. Jones happened to be out of the office that day, the secretary put Joe in contact with his right-hand man. And the more time he spent pounding the pavement in Los Angeles, the more friends he’d make, and the more connections he’d create. And while that trip didn’t end with a recording contract, Joe wouldn’t give up, and he’d eventually end up managing a wealth of recording artists, including the friend he once stood in Quincy Jones’ office for.

Before long, Joe was flying from New York City to Los Angeles, to Atlanta, and his hobby had become a full-time job. While Joe easily could have made his home in any one of those sought-after cities, he instead decided to keep his roots planted in North Carolina.

“I enjoyed North Carolina,” Joe says, contrasting his home to the inauthentic and harsh nature of bigger cities. “People were friendly. It was a good fit.” At the same time, when Joe recognized the lack of musical presence in North Carolina and in High Point, he approached it with the same tenacity that drove him to stand boldly in Quincy Jones’ office all those years ago. 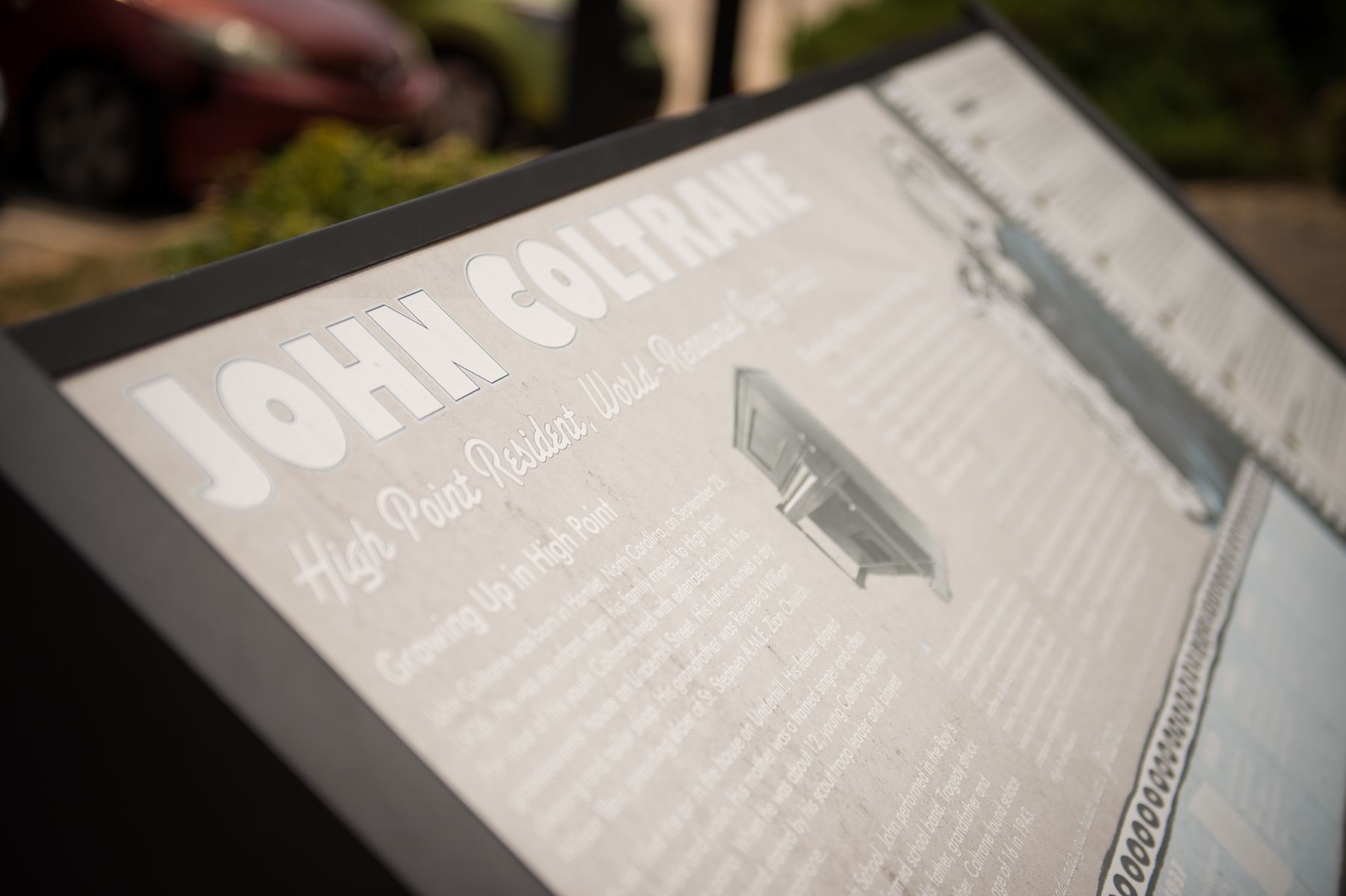 “I saw events, but I never saw them done to the level that I thought that they could be,” Joe explains. “I saw a lot of potential.” He thought about what he could do to give back to the place he lived when it came to strengthening the musical community.

“I’m not a politician,” Joe says. “But everybody has their gifts, and a lot of people don’t know how to use them or have an opportunity to use them in their hometowns… But I thought, ‘I’m here, I have the knowledge, I have the abilities, I have the contacts. So let’s do it and let’s try.’”

Alongside other High Point partners like Patrick Harman, Joe has seen the risk of the festival deliver tremendous reward. Since those first years, the festival has taken on a quality that many of the performers and fans call magical. One magical moment was of the bass dual between Marcus Miller and David Sanborn that still lives in jazz infamy today.

“I’ve been everywhere, and this has only happened three times in my entire career,” Sanborn said to Joe.

Other artists like Poncho Sanchez ask to return to the festival year after year, because the level of community involvement in High Point is unlike any other.

“I come out into the audience, I talk to people, I sit beside them and have meaningful conversations,” Sanchez shared with Joe. Audience members even found out about Sanchez’s love of sweet potato pie and had pies baked especially for him. 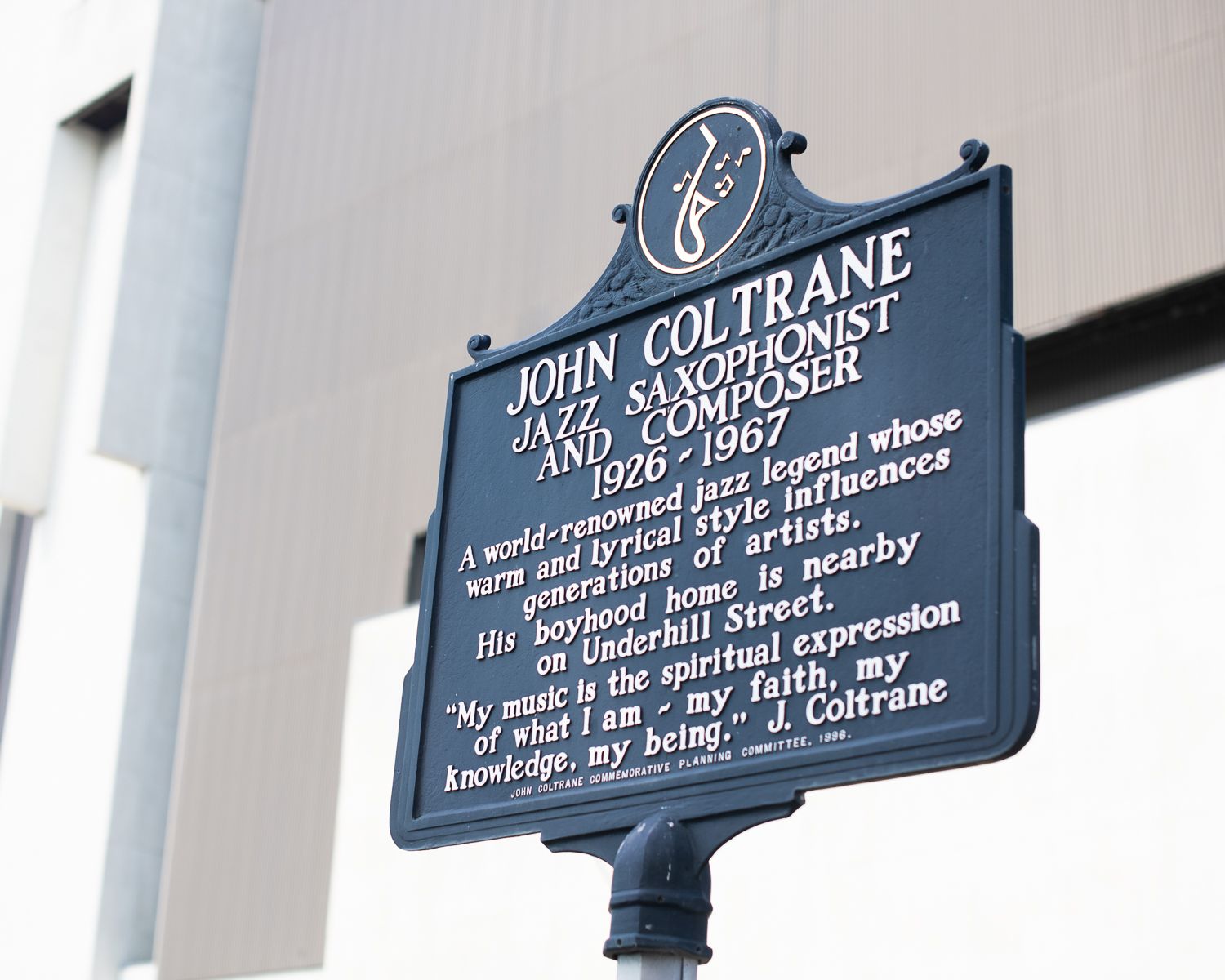 “It’s so much bigger than Coltrane,” Joe says. “He was an explorer… He’s that guy who would just go out trying to find something new, and he took it and applied it to his saxophone, which created notes and a way of doing things that people admire.”

And this spirit of finding new ways to do things, building a craft that people admire, and rallying a community around a common passion is why the Coltrane Jazz Festival exploded. Like Coltrane, his legacy festival has touched and inspired people in surprising ways.

“The festival has so many antennae to do so much good in our community,” Joe adds. He shares about the student instrument portion of the festival, a program designed for students who have an aptitude in music but not the resources to secure their own instruments. The students write an essay about what music means to them and the winners are given a brand new musical instrument.

Joe recalls one student who specifically dreamed of owning a Gerald Albright special saxophone. And while the festival’s partner manufacturer doesn’t produce those saxophones, Joe began to call in favors from friends in the industry. After hearing the request, Gerald Albright himself made the saxophone available.

“When I called the student’s mom to tell them he won an instrument, they were in tears,” Joe recalls. The mother later shared with Joe that securing the saxophone for her son was a moment that truly changed the course of his life.

“Everything changed,” she shared. “His schoolwork, everything… He has so much pride that he won this instrument. He doesn’t go anywhere without it.”

There are other stories of artists taking time at the festivals to personally connect with fans and students. From Branford Marsalis meeting with students to Marcus Miller giving out his personal email address, to Kenny G sharing stories of how he didn’t make the high school band – the artists who come to High Point become part of our community in their own way.

Joe attributes that in no small part to the warm, welcoming nature of the High Point community. The diversity of artists and fans who travel from all over the world to attend the festival get the opportunity not only to experience jazz and blues music built on Coltrane, but they get the chance to experience the incredible city he once called home. 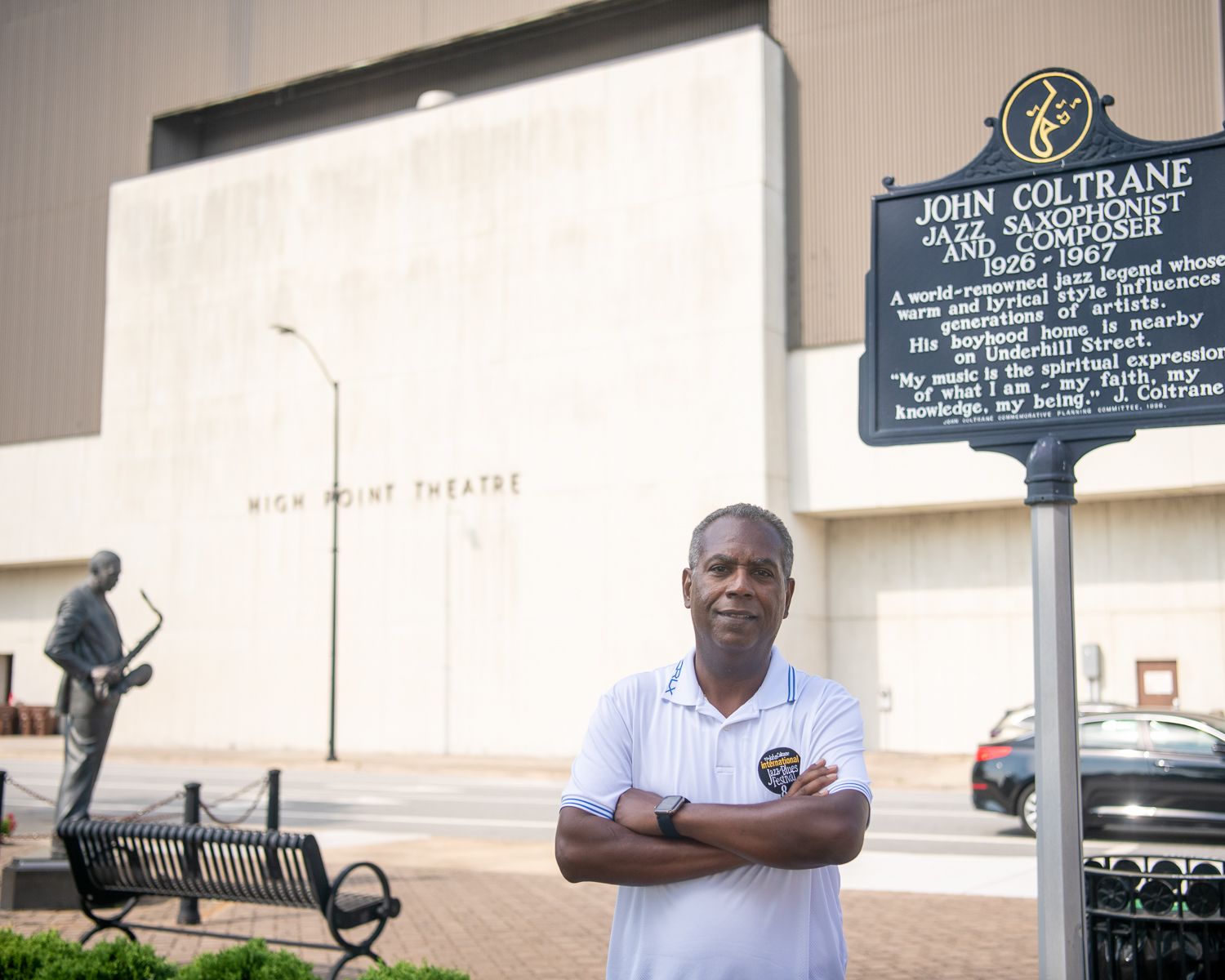 “The festival is a moment where people can turn everything off and meet good people from different parts of the country. They develop relationships, they bond, and they come back and meet again,” Joe says. “It’s something special. There’s a sincerity. Our goal is the experience.”

And while Joe says he hopes that the festival will have many more years to grow and expand, the goal will continue to be providing an experience built on the love of music and community.

“If you give people a great experience they’ll come back, and some will decide – like when I came to North Carolina years ago – that this is the place they want to call home. And we give them an opportunity to experience High Point at its best.”

To  discover more about the John Coltrane International Jazz and Blues Festival, visit https://coltranejazzfest.com/ or click here to get your tickets now for the Sept. 4-5 festival!