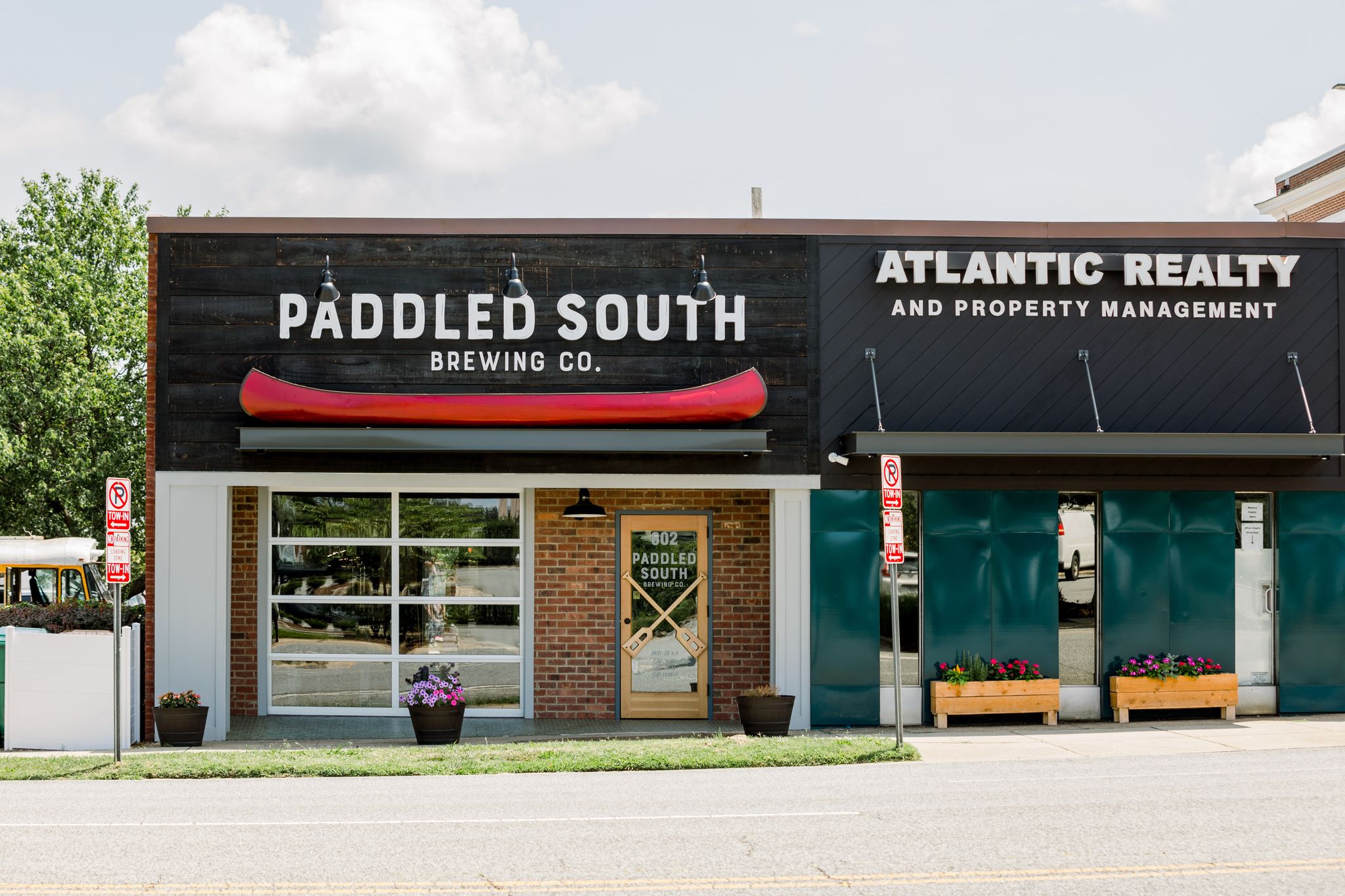 For Dave Nissen, community and beer have always gone hand in... hops. When you ask him why he turned his at-home brewing hobby into a business, he answers quickly, “friends and family.”

“I’ve always liked beer,” Dave says, remembering how more than 15 years ago he was introduced to craft beer and started studying what it would take to make his own. When his wife, Amy, got him an at-home, one-gallon brewing kit for a present, Dave started researching how he could make his own brews.

“It was kind of anticlimactic,” Dave jokes now, remembering the first gallon he brewed with a friend. “We thought it was going to be this huge thing, and it was about eight bottles.” 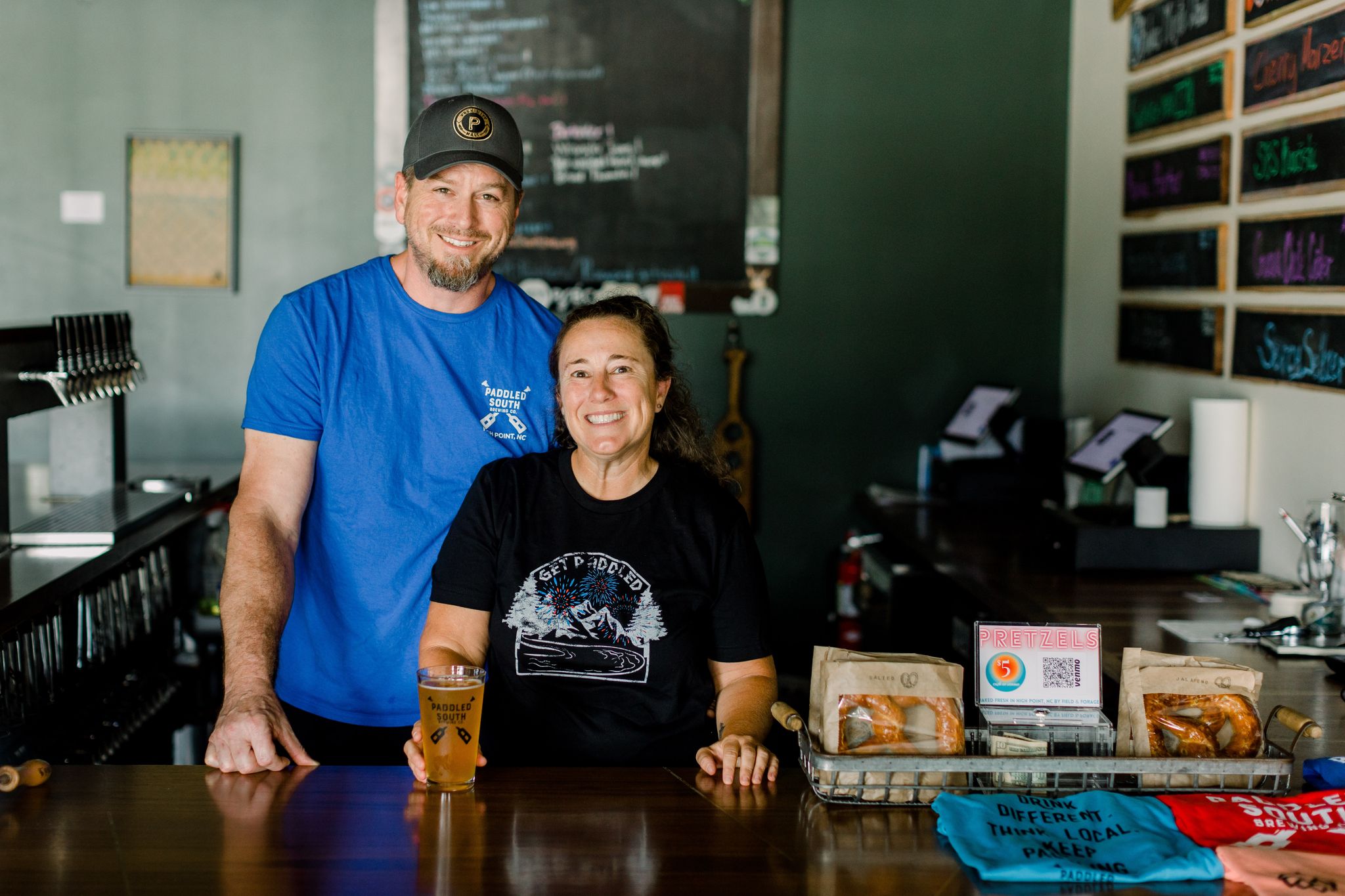 But those eight bottles helped Dave catch the brewing bug. He loved exploring the process and worked his way up to a five-gallon system. He started making five-gallon batches, with five to seven gallons on tap at any given time.

“It allowed me to share more with friends and family,” he says. “That kind of goes with my theme of wanting to give to others. I wanted to be able to share, enjoy each other's company, and build that sense of community.”

Soon, friends and family were asking Dave if he would ever consider selling his beers. As someone who had always been interested in the prospect of owning his own business, Dave took the leap of faith in 2018 to start pursuing the idea more seriously. Armed with the brewing system and a social media account, Dave and Amy started circulating the name, “Paddled South Brewing Co.” in the community. 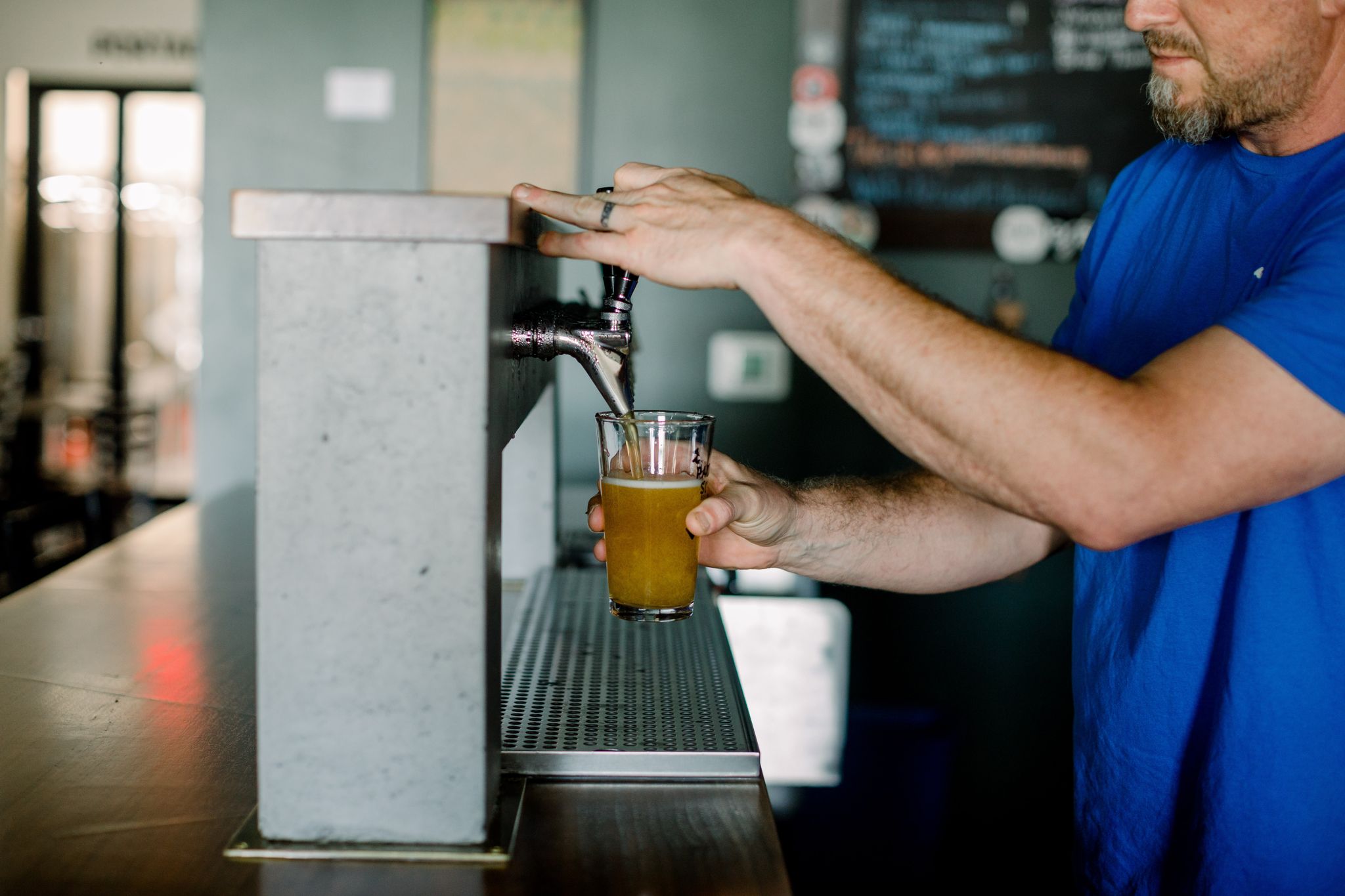 The name came during a family car ride where the Nissens and their two children were brainstorming business name ideas. Dave, a Minnesota native who loves all things outdoorsy (from white water rafting, to kayaking, to canoeing, to fishing), joked that he “paddled south” to marry his wife, a High Point local.

“The car kind of exploded, and we were all like, ‘That’s it! That’s the name of the brewery!’” Dave remembers.

Paddled South Brewing Co. had a name, a brewer, and an idea, but it needed someone with business expertise. That’s where Patrick Watterson comes in.

Patrick, Vice President of Operations at Bethany Medical Center, found Paddled South on Facebook, and was immediately intrigued by the idea.

“I joke that Patrick was born with a beer in his hand,” chuckles Dave. Patrick grew up with a father who was a beer connoisseur, and he himself has studied the art of beer for decades. He reached out to the Nissens, and Dave said they clicked immediately, connecting quickly on their shared passion for brewing.

“We're very similar in a lot of ways,” Dave says. “One thing led to another, and we decided to join forces. He has a lot of experience running a business, and he also brews. It’s a nice partnership, and it all happened fortuitously."

Dave and Patrick especially appreciated the freedom and creativity that owning their own brewery allows when it comes to the rotation of beers on tap.

“I tend to just brew what I feel like brewing,” Dave admits. He says he isn’t a “seasonal brewer,” meaning that it wouldn’t be unusual to find a light and fruity sour in the middle of winter at Paddled South or a heftier stout in the summer. Because they use a three-barrel system with six-barrel fermenters, they are able to rotate out their on-site brews quickly, making way for new experiments, flavors, and limited-edition beverages.

So with Patrick’s and Dave’s shared brew creativity, all Paddled South needed was a home. And with the three owners’ roots in High Point, the city was the obvious choice. Amy Nissen, who grew up in High Point, especially wanted to keep the brewery located in her hometown. 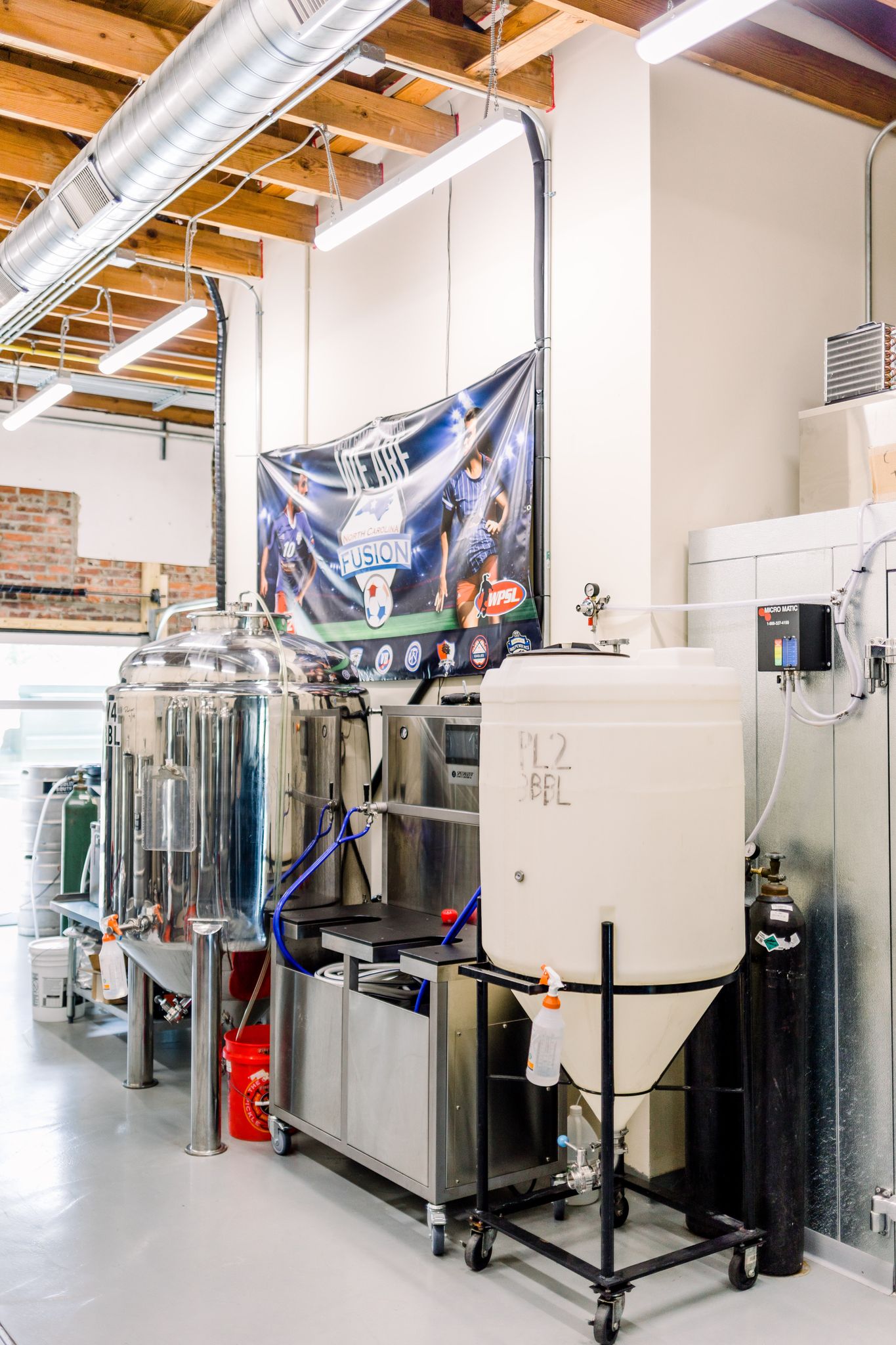 “As much as High Point has given to Amy and her family... She's extremely passionate about taking care of the city that has taken care of her,” Dave notes. When the opportunity came in 2019 for the Paddled South visionaries to make their home at 602 N. Main Street, they jumped at the chance. With the ballpark opening, the food hall on its way, Congdon Yards’ construction, and revitalization in full-swing, Dave, Amy, and Patrick were excited about getting to play their own part in the revitalization work.

So despite setbacks in their timeline due to the COVID-19 pandemic, Paddled South kept paddling upstream. And by summer of 2021, the brewery opened its doors. The space, designed in partnership with local High Point businesses like Stabb Designs, Barbour Spangle Design, and Freeman Kennett Architects, was designed to feel both warm and cozy and, in Dave’s words, like an adventure. 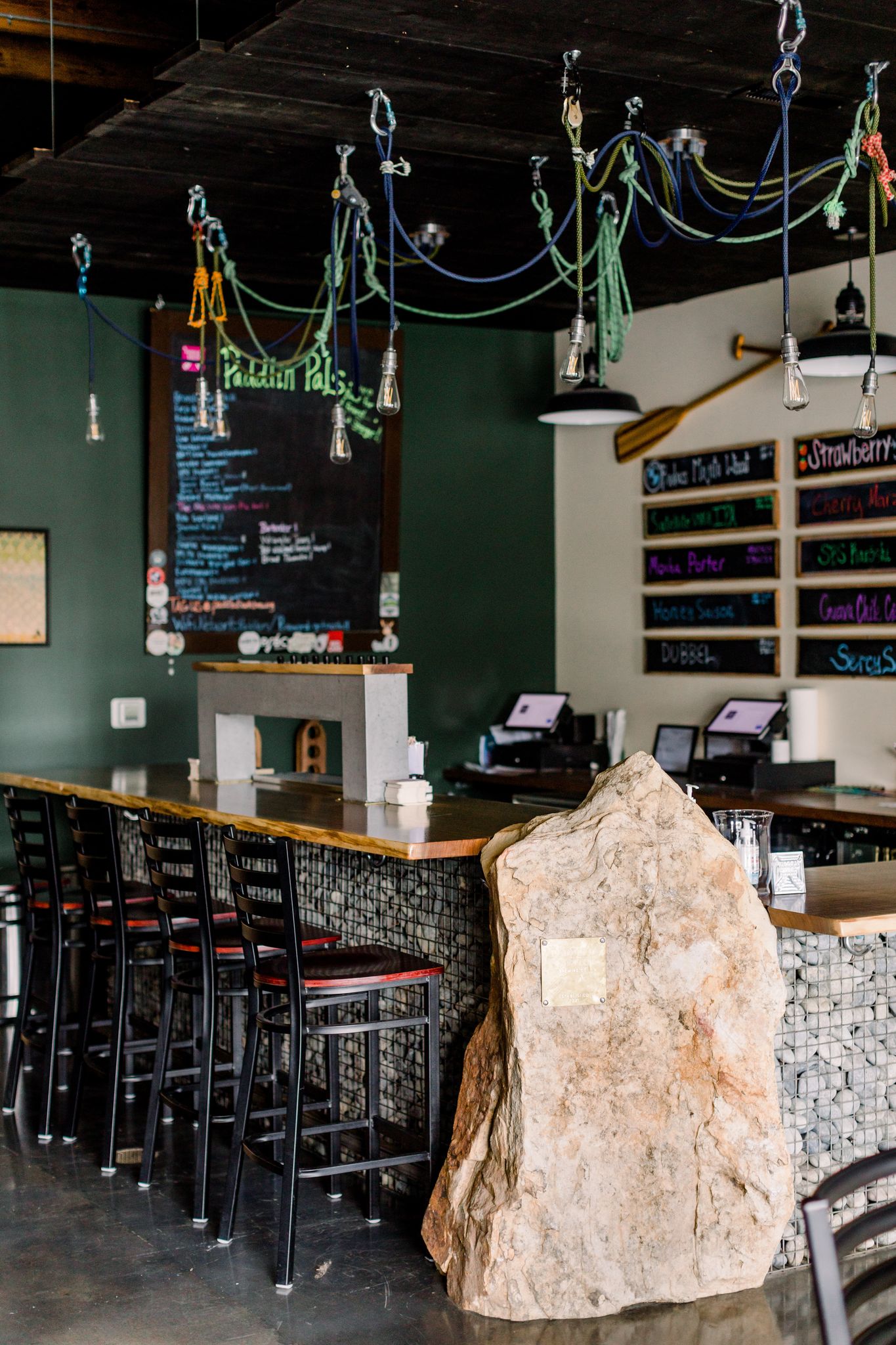 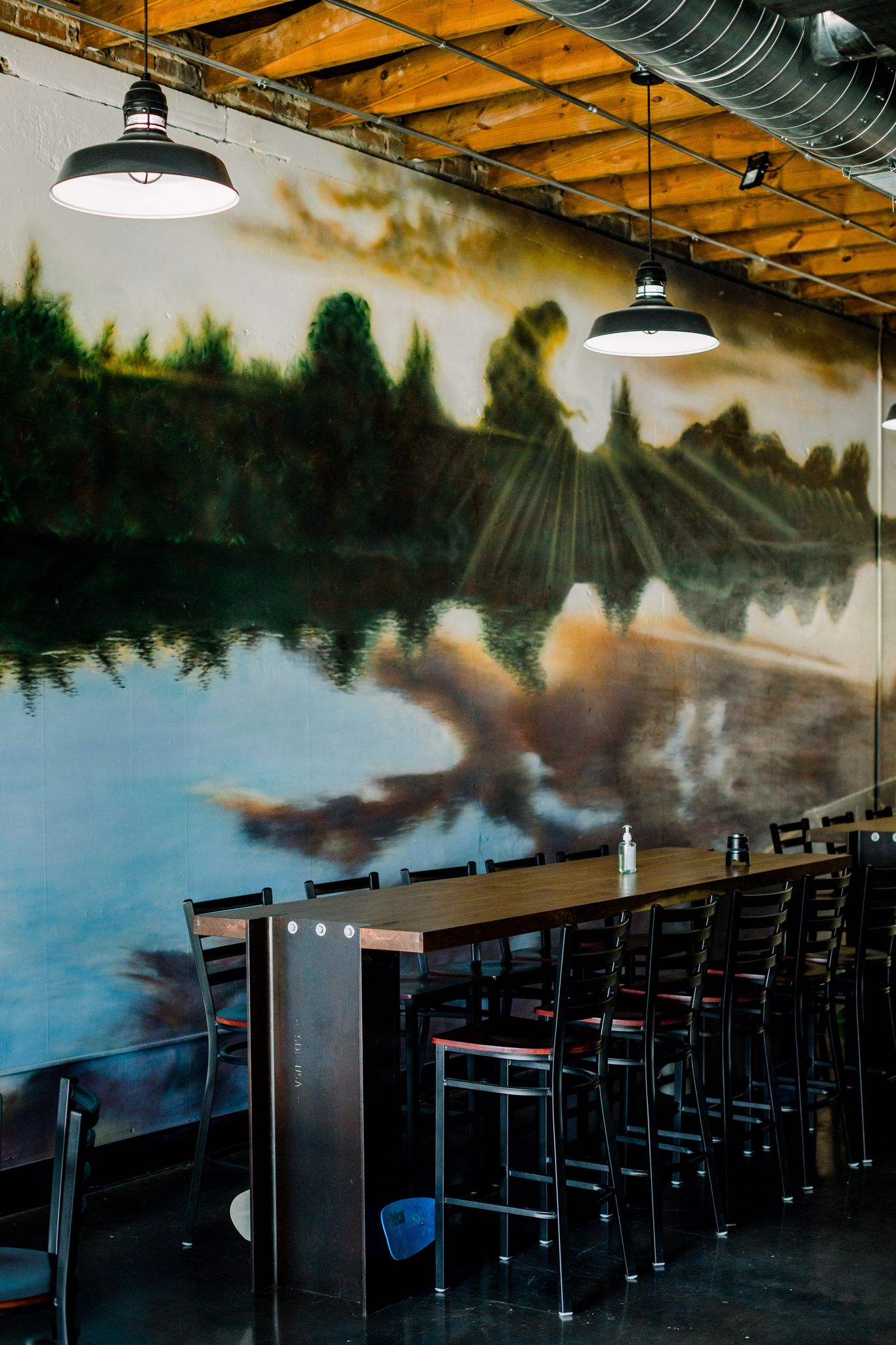 “It was just magic,” Dave says of the creative collaboration that happened between Justin Stabb (Stabb Designs) and Christi Barbour (Barbour Spangle Design). Unique elements like a rock corner at the bar, rope lighting features, and a sliding barn door for easy access to the brewing space all give the brewery a one-of-a-kind feel. Even the logo, designed by the Nissens’ longtime friend, Kristin Everidge, pays homage to the mash paddles used in the brewing process.

“We've used local businesses to build this business,” Dave says. “It was very important to us to use local when we were doing this.”

“It’s nice to be able to bring those here,” Dave says. “It keeps folks here in High Point and is another way of pulling people into High Point.” He notes that not only does it incentivize High Pointers to enjoy breweries in their hometowns, but it fosters community amongst local brewers, rather than competition. 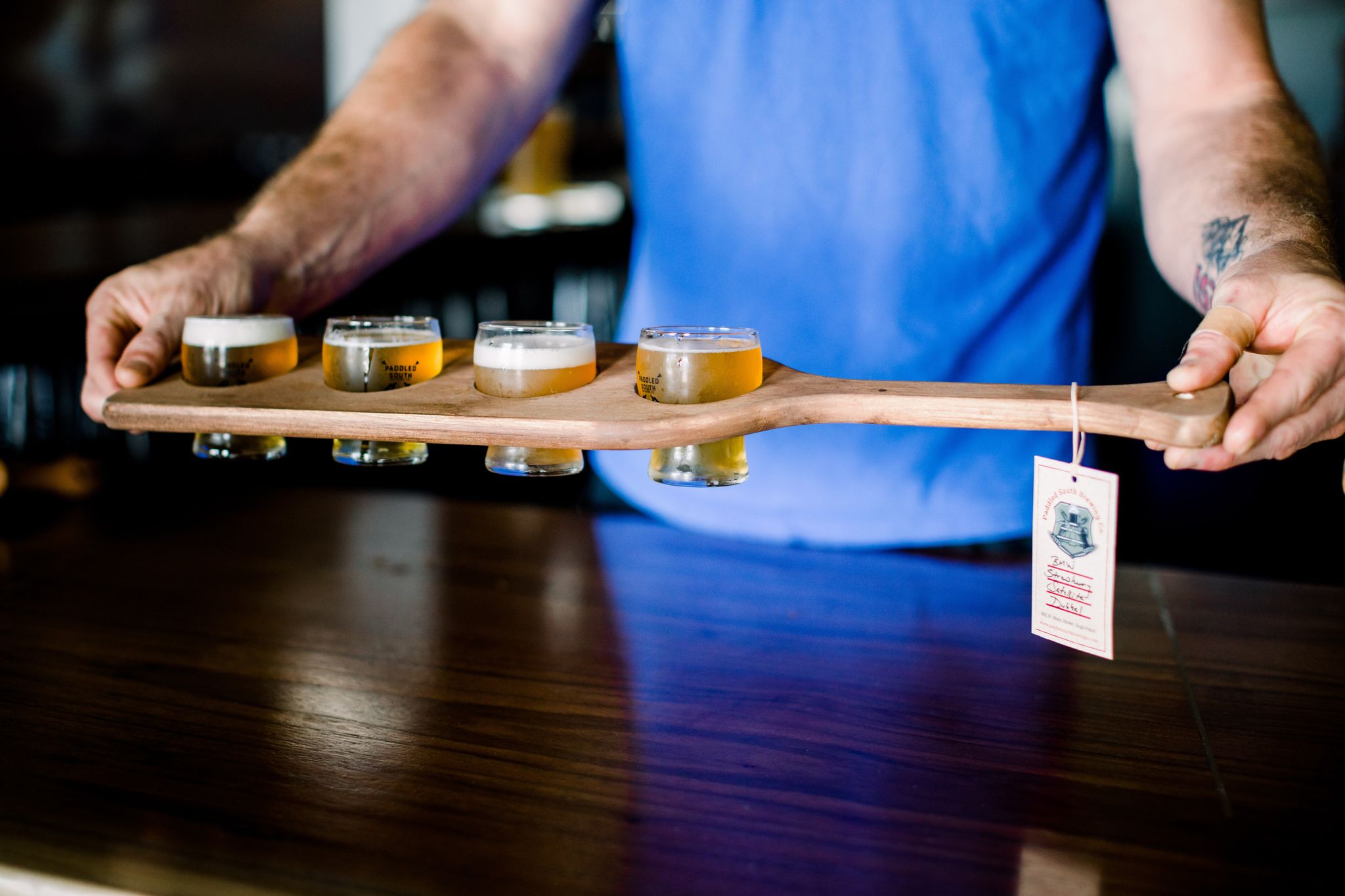 Dave shares about friendships he's formed with the folks at Brown Truck Brewery and Goofy Foot Taproom & Brewery. He adds that, as High Point brewers, they understand how they all benefit from more spots in High Point bringing more customers to the city.

“We understand that this growth is benefiting everybody,” Dave says.

“That barn door to the brewery very rarely closes,” Dave says. "We want customers to see what's going on... If I'm here and somebody's walking through and they have questions, I want to answer them.” The on-site brewery even means that customers can try their favorite drinks throughout the process, learning the magic behind the method that makes the perfect pour. 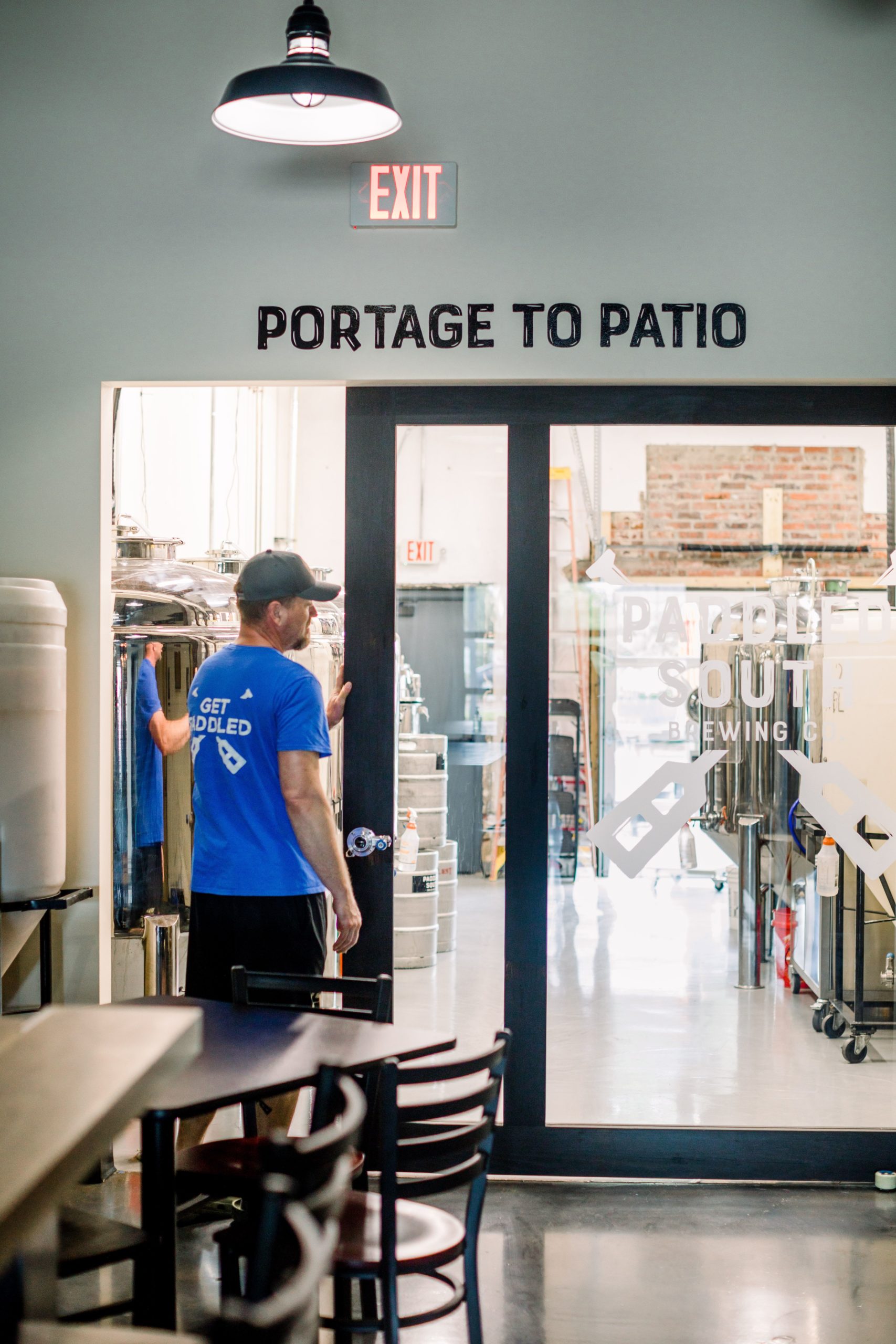 The on-site brewery at Paddled South can be seen from the taproom. 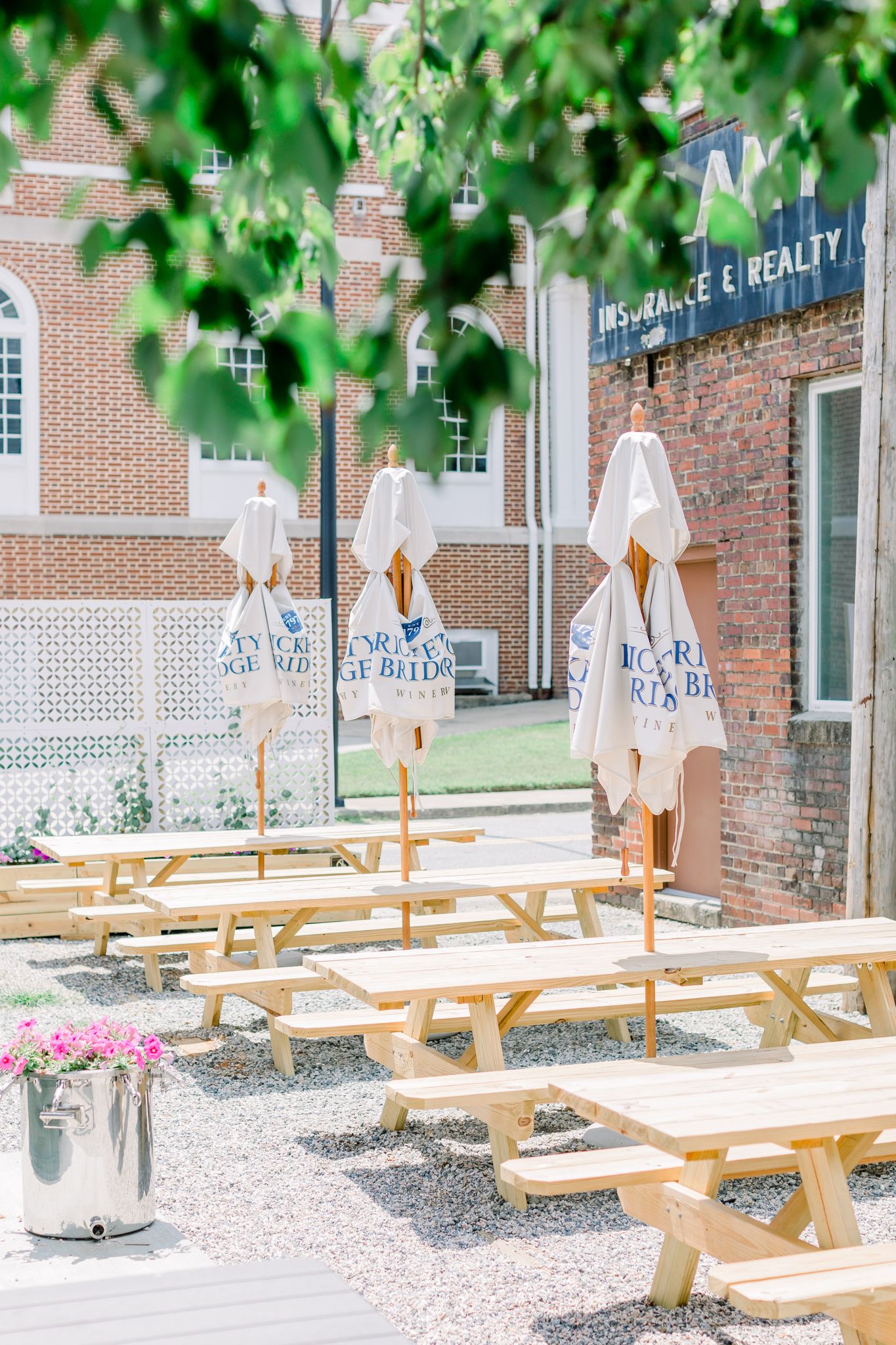 Patio space for live music and dining at PSBC.

“We want to be a community brewery,” Dave says. “We want people know that we are invested in the community and we are going to do everything we can to build the community up.”

That’s why the local love at Paddled South is brewed into everything they do. This collaborative, community-focused mindset is also why Dave wants Paddled South to be a place that fosters business growth across the board.

“There's a lot of great businesses in High Point, and we're trying to partner up and shine a spotlight on them,” he says. Paddled South collaborates with a variety of High Point-based businesses, from live musical performers to food trucks, to charcuterie boards.

“We want what's going on in High Point to be spotlighted. And we'd love to be that place,” Dave states. “We want to invite people in and give them a chance to show everyone else who they are and what they have to offer. That’s what is going to make High Point that much better." 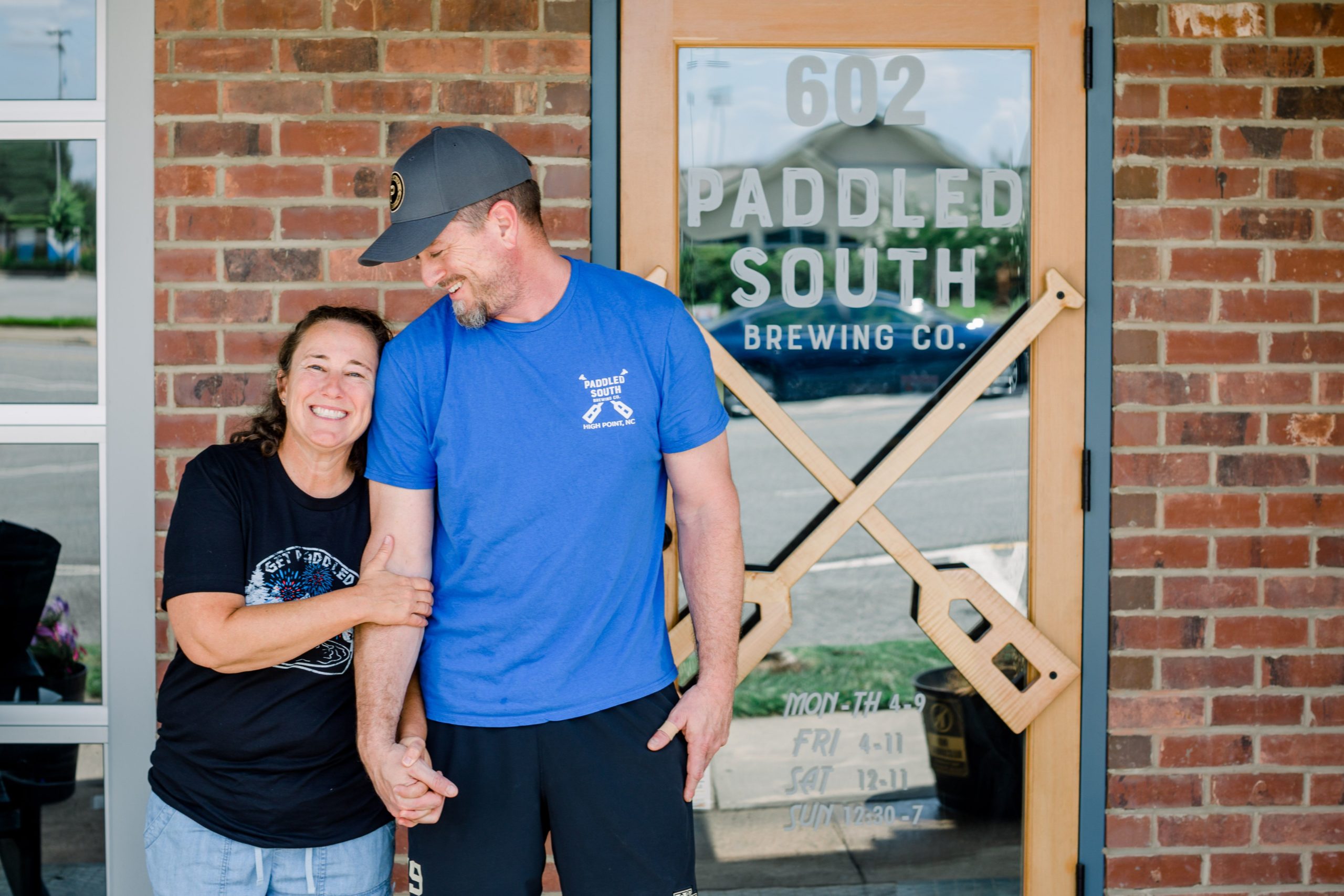 “We want to be a community brewery,” Dave says. “We want people know that we are invested in the community and we are going to do everything we can to build the community up.”

Keep up with Paddled South online!