When our founder, Christi Barbour, went to the High Point Young Professionals Summit in November of last year, she heard a local High Pointer she had never met speaking on arts in the city. As she listened, she found out he had worked as a band director at T.W. Andrews High School and now worked in the school system. His name is Cyril Jefferson and his message and fervor caught her attention.

“I was sitting at that table that night, thinking, I have to talk to this guy,” Christi says. At that point, High Point Discovered had been operating as a creative brainstorm-turned-High Point lifestyle blog for about a year, born out Christi’s desire to see our city portrayed “unapologetically through a rose-colored lens.”

But as the support for the blog grew, and a full team soon rallied to bring the articles to life each week, a new need became increasingly apparent.

“I started out telling the stories of the people I knew well, who trusted our vision and believed in what we were doing, even if they didn’t understand it all exactly,” Christi says – meaning the blog article subjects were limited to the handful of colleagues and friends of Christi’s who had heard about High Point Discovered and wanted to support the blog. But she knew that in order to truly start telling the stories of all of High Point and our citizens, it would take a lot more than just some phone calls to local restaurateurs and businesses. 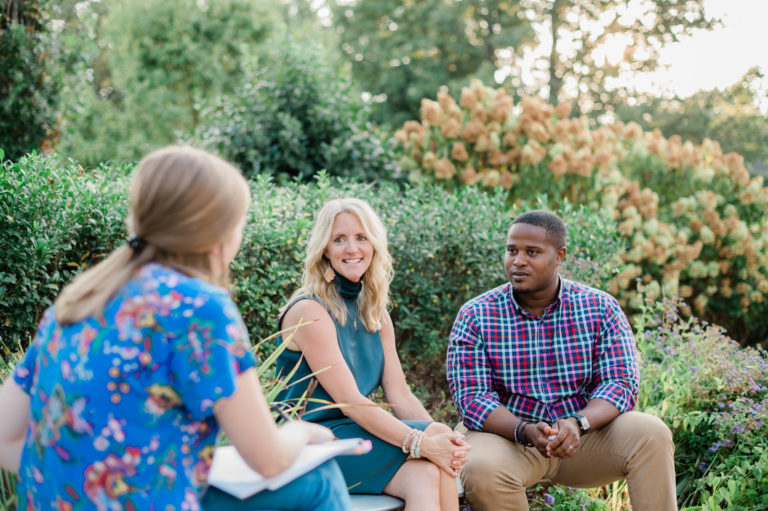 “So I asked Cyril for help,” Christi says. That very same night that Cyril spoke, she introduced herself, and the two instantly formed a connection. Cyril and Christi quickly learned that they shared a mutual friend and soon the wheels began turning in both of their minds. Christi reached out to Cyril again and voiced her vision for High Point Discovered.

“We needed a deeper pool of resources” Christi says. The story of High Point was much bigger than Christi’s colleagues, and she knew to tell it well, new connections would need to be made. Cyril, a firm believer in the power of human connection, found himself intrigued and inspired by the idea of helping High Point Discovered’s storytelling grow.

“I believe in making connections,” Cyril says. “I believe that’s the strongest thing we have as humans. We have the ability, not only to connect, but the ability to learn when we connect.” Cyril assumed from his conversation with Christi that an opportunity to collaborate was presented and also the chance to befriend a fellow High Point advocate.

Their collaboration was set into motion by a joint project to find and share stories of high school students in our community, which blossomed into High Point Discovered’s Outstanding Student series. 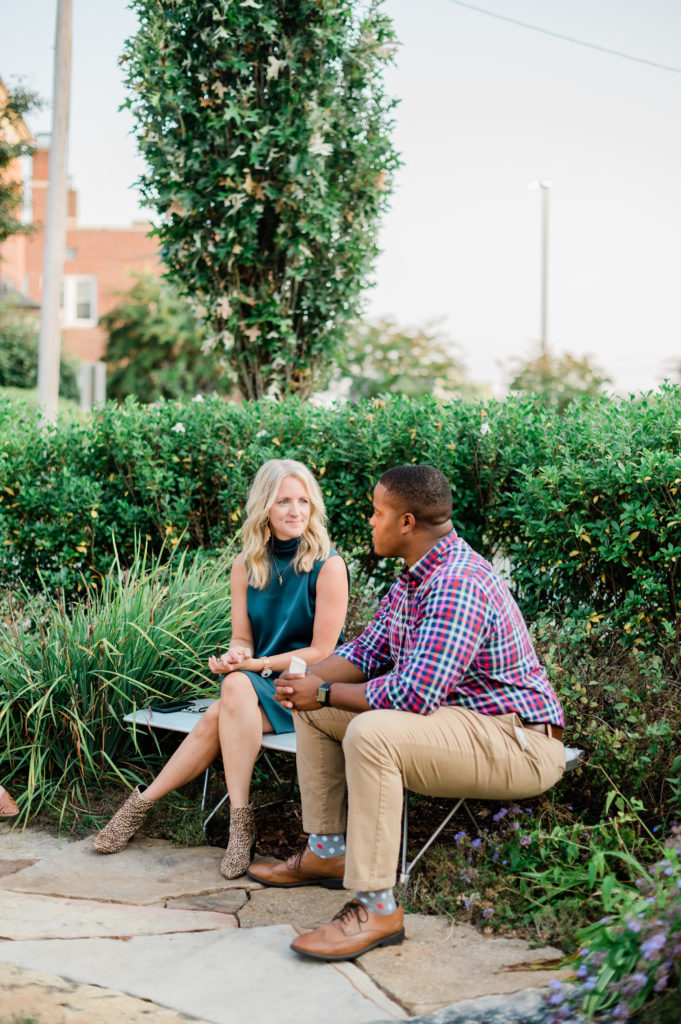 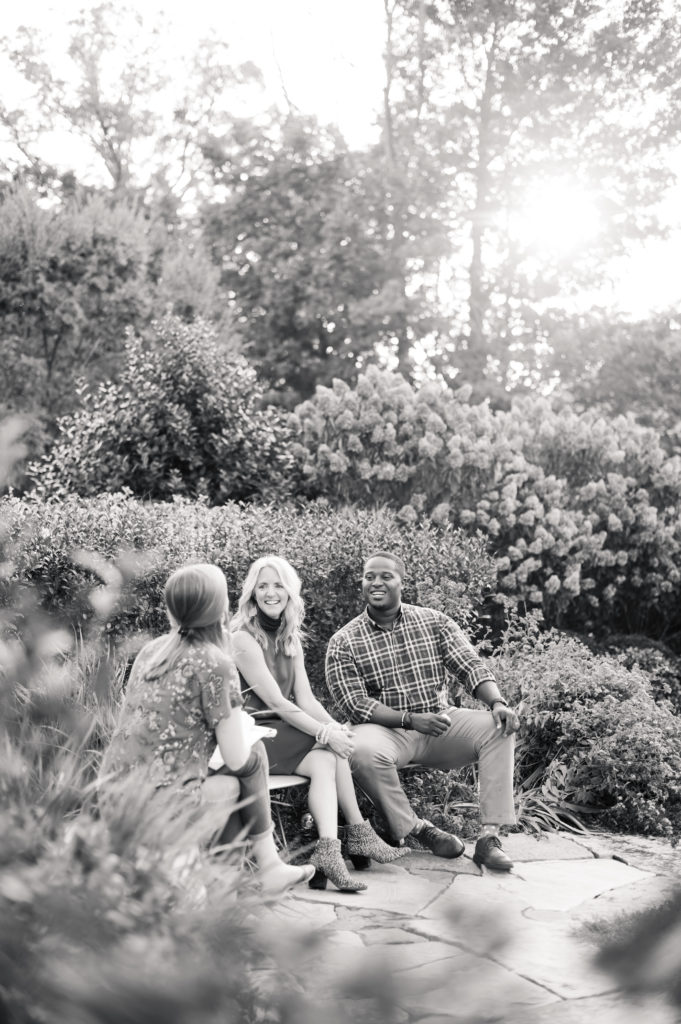 “High Point Discovered wanted to tell stories, and I’m thinking of all these awesome students who don’t yet have their stories told,” Cyril says. His first student nominee was his friend and mentee, Isaiah Tatum.

“He brought Isaiah to the table, who is just a brilliant young man and such a bright light in our city,” Christi says. “And that was a light bulb moment. There are so many kids who have stories to tell; we simply need a bigger network to help us continue to make those connections.”

As an active participant in Guilford County Schools, Cyril was the perfect connector. He had a growing list of students to nominate, so he and Christi began to meet regularly to discuss how to incorporate more human-centered stories in High Point Discovered’s content calendar moving forward. They also began to discuss what it would look like to start building relationships that extended beyond the circles they typically found themselves in.

To move past the connector level to even deeper local involvement, you have to form true friendships. Together, Cyril and Christi decided to start forming new relationships in their community, which was jump started by the two joining forces to execute Cyril’s idea for the Extraordinary Educator series of articles for the blog. 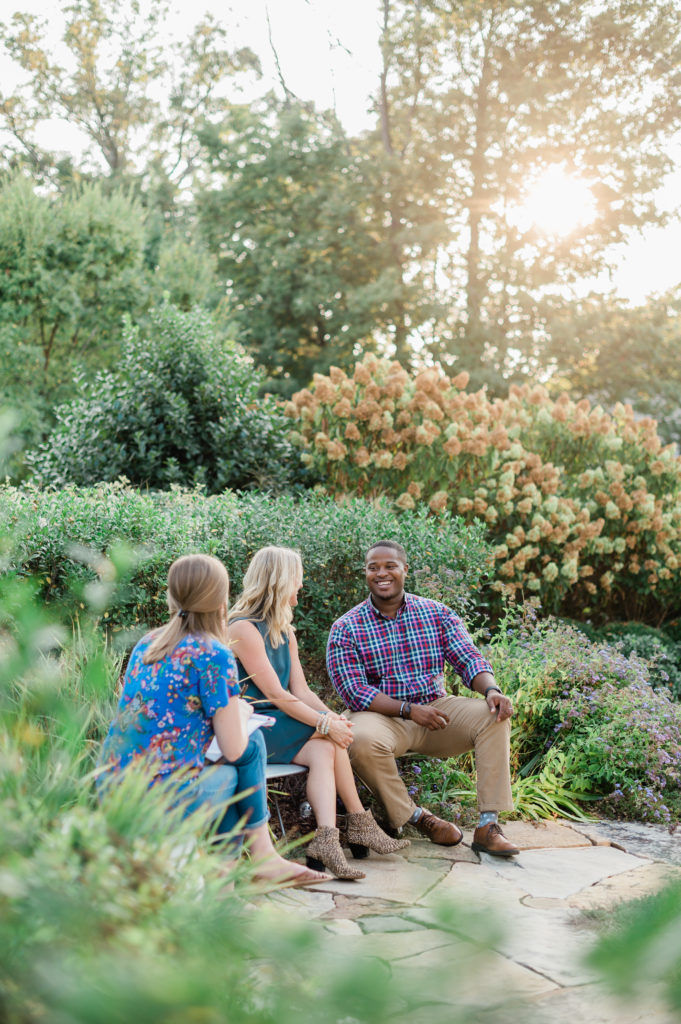 As Christi and Cyril began to work through their plans for incorporating the fuller story of High Point, they discovered a deeper truth playing itself out. Diversity breeds creativity.

“I’ve always believed that in order to create, sometimes it takes something from the outside joining that which was inside to shake things up,” Cyril says. He adds that High Point is known as one of North Carolina’s most international cities, meaning we’re primed to embrace diversity. “From diversity you get creativity and from creativity…you create new opportunities for growth.”

“Creativity takes courage,” Christi echoes. “Having difficult conversations does take courage, but it is also the gateway to creativity which makes such a difference in everyone’s lives. Diversity is more than just race and religion, and at High Point Discovered, we want to tell stories that resonate with all people from all walks of life who live in our city.”

“We have so many good things to talk about in High Point,” Christi says, citing stories of young and old, from all races and all religions. “I think in our public schools alone, we have 118 different languages, so it is such a larger conversation.” Christi describes her vision for seeing High Point Discovered start a celebration for all the good in High Point: the interests, desires, likes, and admiration for every corner of our community.

However, Christi and Cyril both recognize the challenges of truly pursuing diversity and inclusivity in our community. As humans, we don’t always easily understand another person’s perspective. We don’t know intuitively about each other’s beliefs, culture, voice, or struggles. There will be times when we don’t listen well or we make incorrect assumptions. We’re human, so we’re imperfect. But challenge is a breeding ground for positivity. And Christi and Cyril agree, that the extra work needed to fight through our own discomfort – to build trust, exhibit humility, and learn about someone else’s life – is always worth the reward. 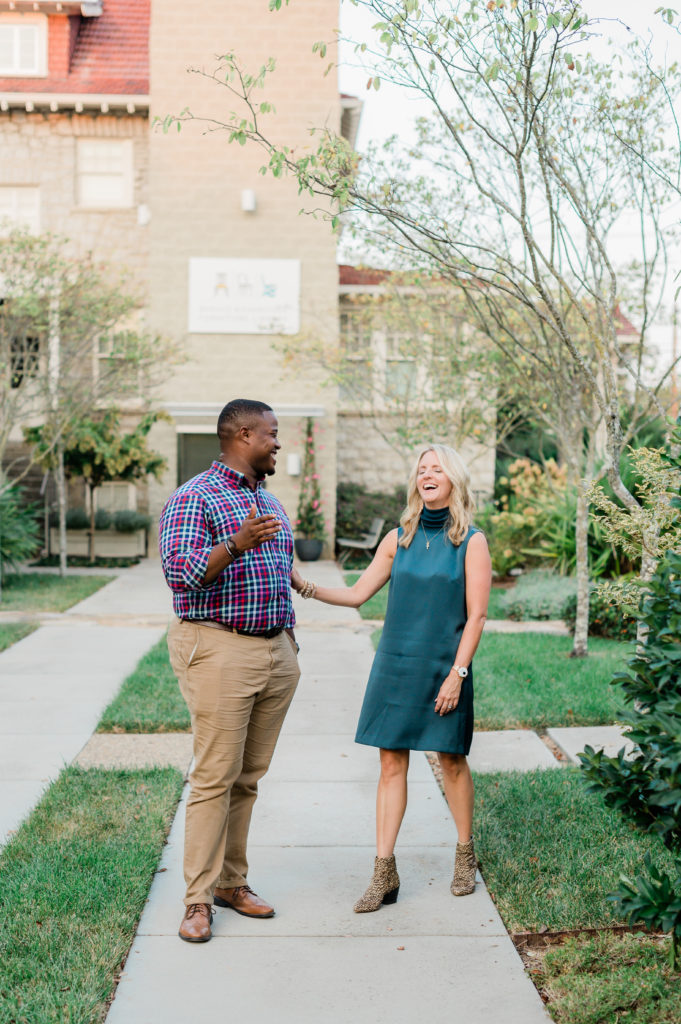 “It goes back to Cyril’s comment earlier about that human element” Christi says. “That’s why we started building cities because we wanted to have a better place to live with a sense of gathering, of community, of support for and by others.”

And creating a better place for us all to live doesn’t always look like grand sweeping gestures. You don’t have to run for city council or host an open forum or hold a rally to make our city better. More times than not, making your city better looks like inviting a neighbor to a baseball game with you. It looks like smiling and holding the door for someone at the post office. It looks like sharing drinks, sharing a table, and sharing your heart with those whom you haven’t yet taken the time to meet.

“Go start a conversation,” Christi says. “Open up that door, smile and say hello. There is power on a human level to be around people not like you. They make you better. They force you to see another perspective, and this creates the opportunity to make us all more well-rounded human beings. At the end of the day, we are better together than we are separate.”

“Embrace empathy,” Cyril says to all looking to start bettering our city. “Embrace understanding. Put yourself in someone’s shoes, have a healthy perspective about things.” 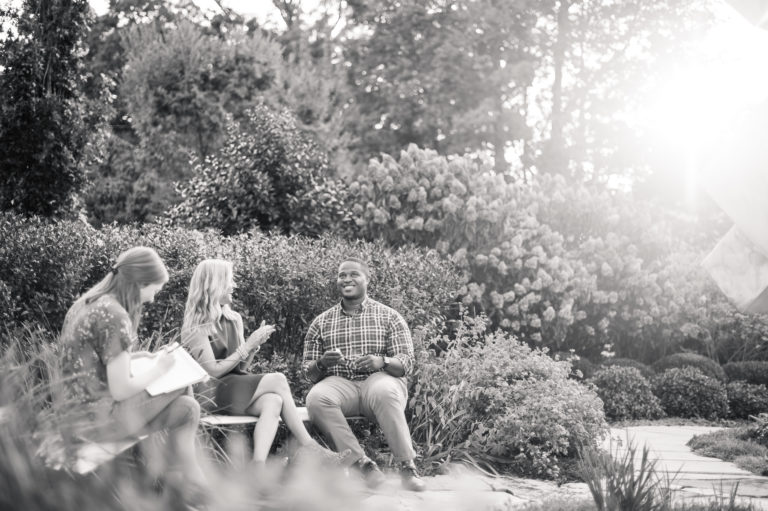 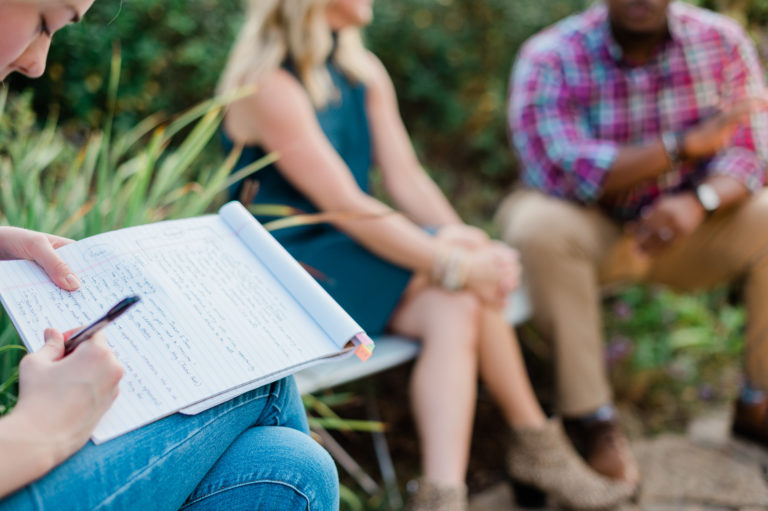 And Christi and Cyril both agree that one of the biggest tools to embrace empathy and fight division in our communities is the power of a good story. Because listening to someone’s story is the closest we can get to stepping inside their mind and their world, and from there, we can cultivate a sense of compassion for their perspective.

“Stories live for ages. They’re passed down and they’re used for a lot of reasons,” Cyril says.

He explains that psychologically, something happens between the storyteller and the listener when a story is passed down. A link is formed; a bond is built. A good story invites the listener into a range of senses, memories, emotions, and shared human experiences. Stories make us feel safe, welcomed, and connected. In other words, stories create a space where the teller can be fully heard and understood by the listener.

Where barriers to diversity try to breed fear and pride, stories create a sense of safety, empathy and even relatability between the listener and the story’s subject. And even beyond the good they create between the hearer and the teller, stories empower because they impart value.

“In some museum somewhere there’s a Coke bottle just sitting there because Elvis gave it to somebody, and there’s a story behind it,” Cyril jokes. “All of a sudden, the story gives the object value. And when people are allowed to have their stories shared and told and put out, it gives their lived experience value.” 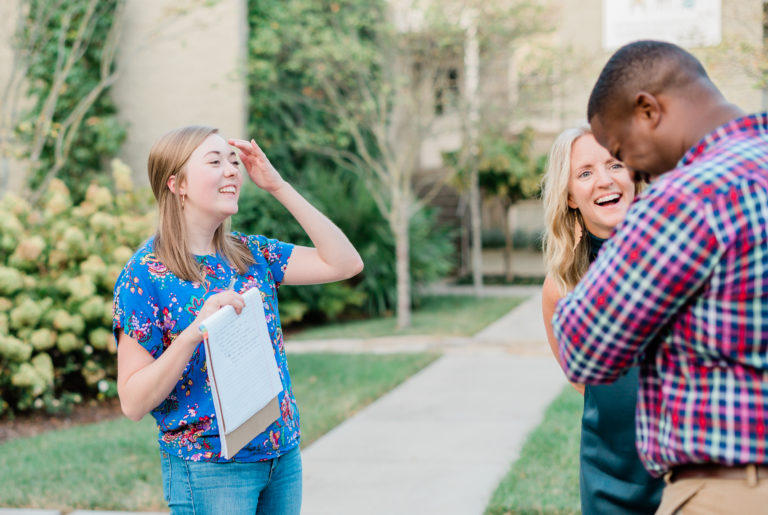 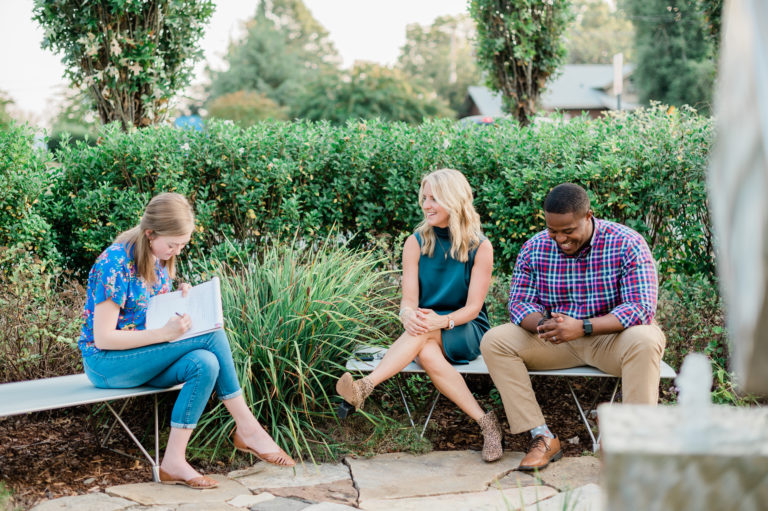 And here at High Point Discovered, that’s exactly what we plan to do.

A very special thank you to our friends at the Bienenstock Furniture Library for allowing us to conduct this interview and photo session in their beautiful gardens.