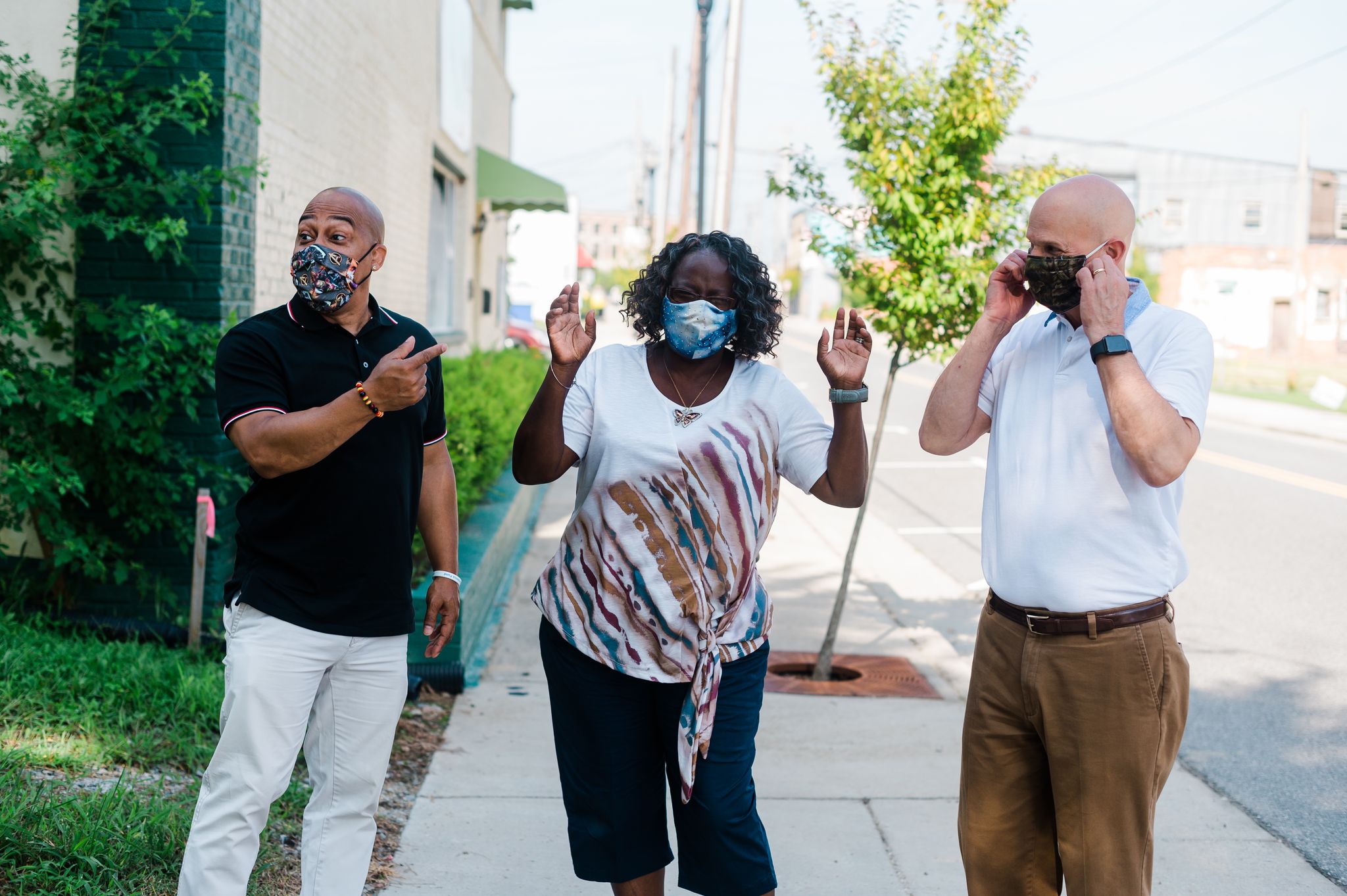 One of our city’s “claims to fame” is the historic Washington Street. Once deemed the “Black Wall Street,” Washington Street has been home to iconic buildings of culture and history like the Kilby Hotel, Jackie’s Place, and more.

But more than holding history from the past, Washington Street holds opportunity for the future. And it was on this founding belief that a group of men and women formed the Washington Street Business Association (WSBA) more than a decade ago, which has since led to community collaboration.

Telissa Ward, now an executive committee member of the WSBA, remembers how the group first formed more than ten years ago now. 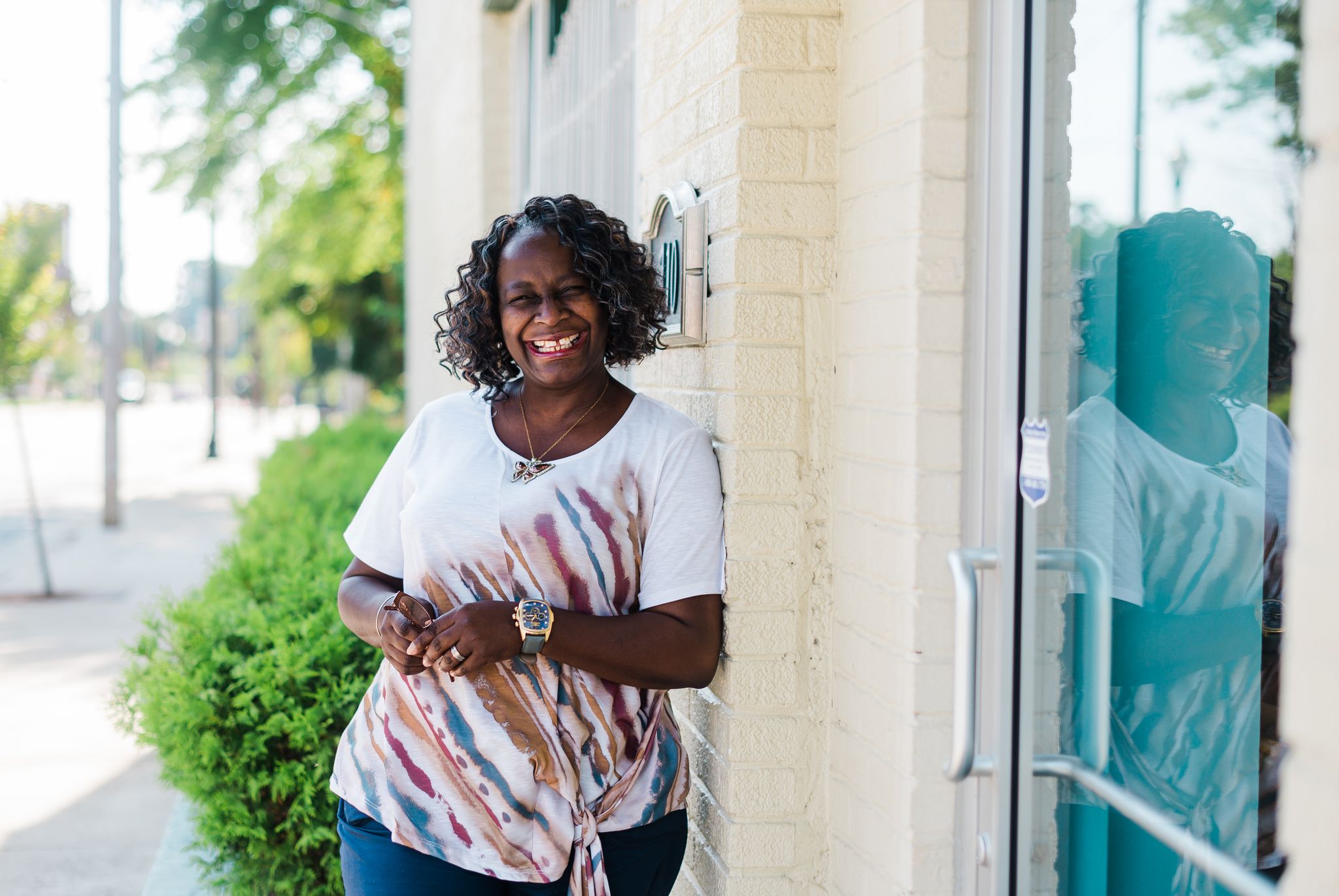 “We wanted the Association to say, ‘This is what Washington Street can look like and did look like,’” Telissa says. After its founding, the organization began to grow, forming its own board and setting goals of beautifying and restoring the Washington Street area. From marketing to outreach, to mural painting, to laying new water and sewer lines, the WSBA began to revitalize the area. Members like Patrick Harman, Executive Director at Hayden-Harman Foundation and Jakki Davis, Executive Director and co-founder of D-Up became involved.

Yet the Association was always on the lookout for what they could do to truly bring the community out onto Washington Street, get the word out about local businesses, and increase funds for their community efforts. That’s when the idea of the Unity Festival was born.

“The Unity Festival really started by accident,” jokes Patrick Harman, board member of the WSBA. “But it has been one of our biggest catalysts as an organization.”

The Unity Festival, which began as a simple community-wide event, has exploded over the course of the last 11 years. Bryon Stricklin, now Chairman of the Washington Street Business Association was brought on in 2018 as an entertainment consultant for the Unity Festival.

As President of a local non-profit, The MIND Group (Moving In a New Direction), Bryon had ideas about how to use the WSBA platform to engage the community in a new way. 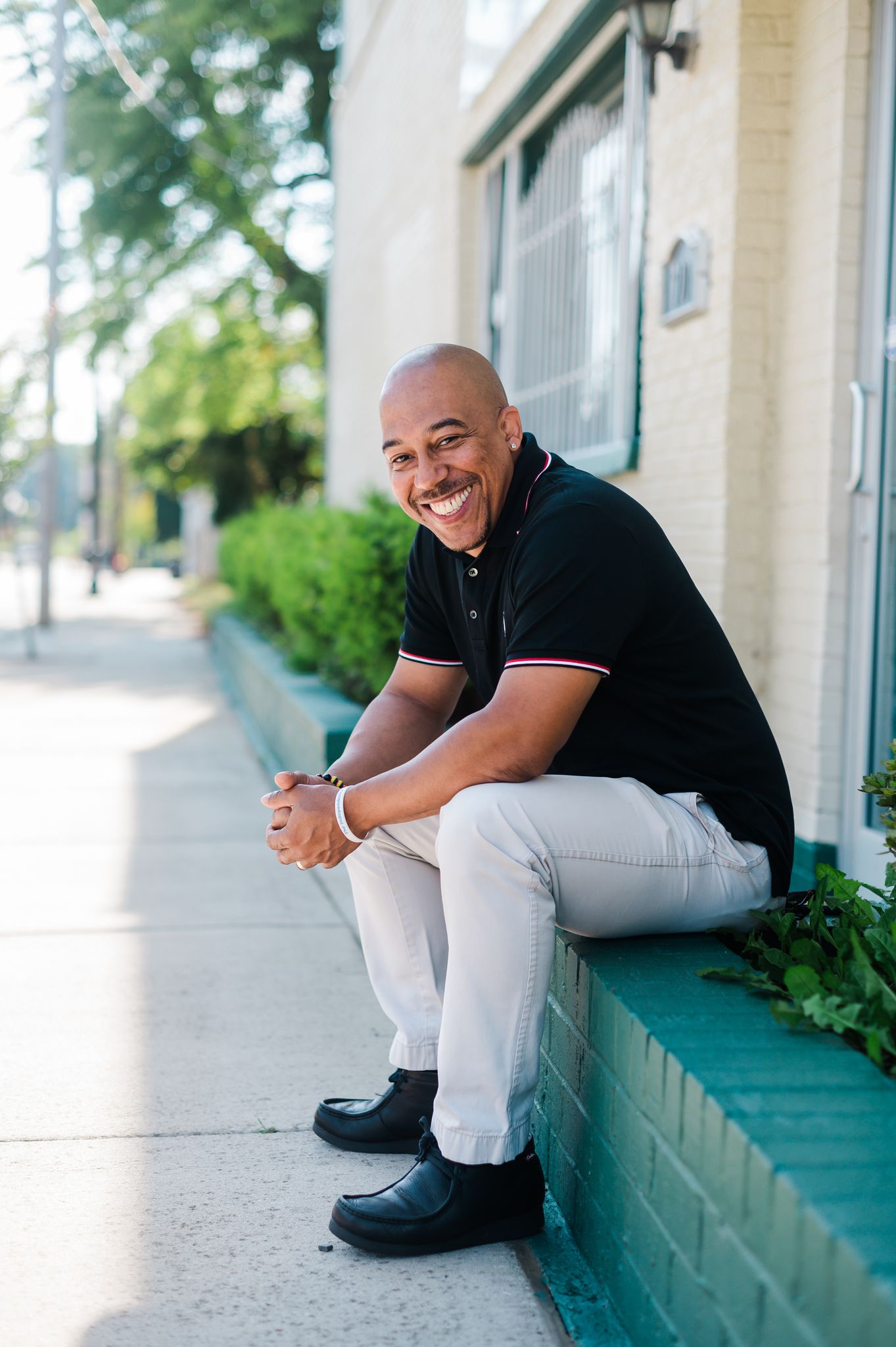 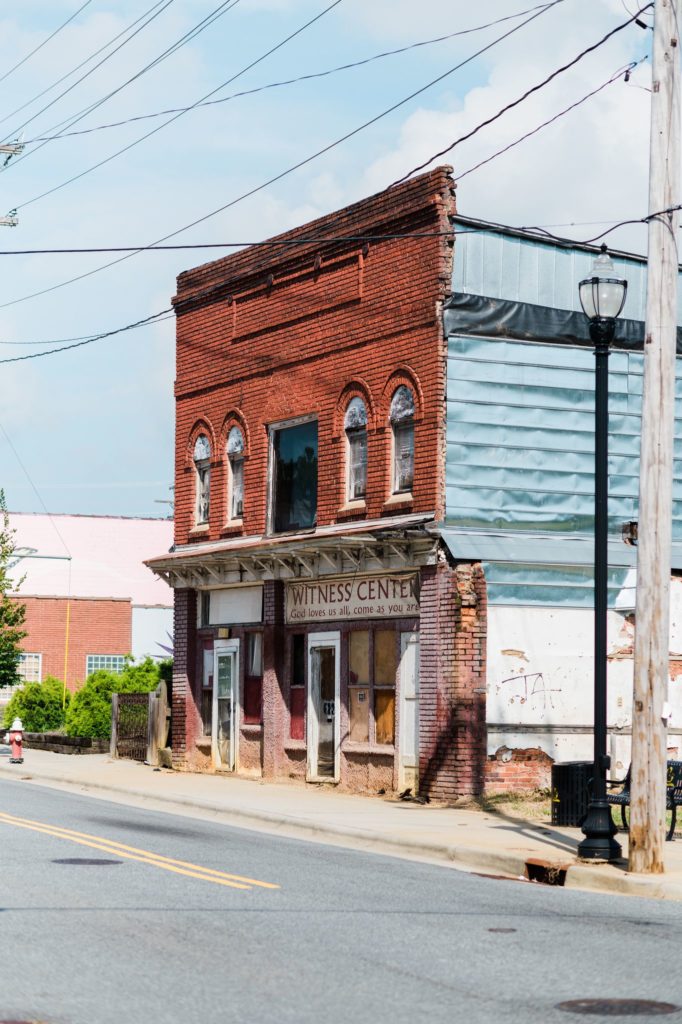 “The Unity Festival is essentially a community-wide free event to promote solidarity and oneness among our residents, business leaders, and patrons throughout the community,” says Bryon. “We want to make the festival as entertaining, robust, and inclusive as possible.”

As the group sought to find budget-friendly ways to make this possible, The MIND Group was inspired by the idea of bringing local artists back to High Point to perform. Launching an initiative known as the Home-Grown Music Series, The MIND Group located High Point-native artists in the music and entertainment industry and asked them to be part of the Unity Festival.

“We invited them to come back home,” Bryon says.

But the Unity Festival’s growth is just part of the expansion and relaunching of the Washington Street Business Association. Coming off of its tenth year, the WSBA leaders and advocates met together to decide how to push the organization forward. They moved to elect Bryon as Chairman and expand the WSBA platform by using their strength in event planning to raise awareness, support revitalization efforts, and increase youth programming.

“As we shape the narrative for what we want High Point to become, the Washington Street Business Association intends to be on the cutting edge of changing the narratives in our city,” Bryon says. “In order for us to do so, we have to look at where we are and find ways we can modify and restore parts of the district.”

Bryon adds that the WSBA intentionally looks for ways to partner with other organizations in the city, and count Business High Point, Visit High Point, Forward High Point, and the High Point Community Foundation as some of their partners.

“Division is a quick way of subtraction,” Bryon says. “If we’re dividing, we’re just taking away exponentially, and I think that the opportunity for us to do something special starts with an event like the Unity Festival.” 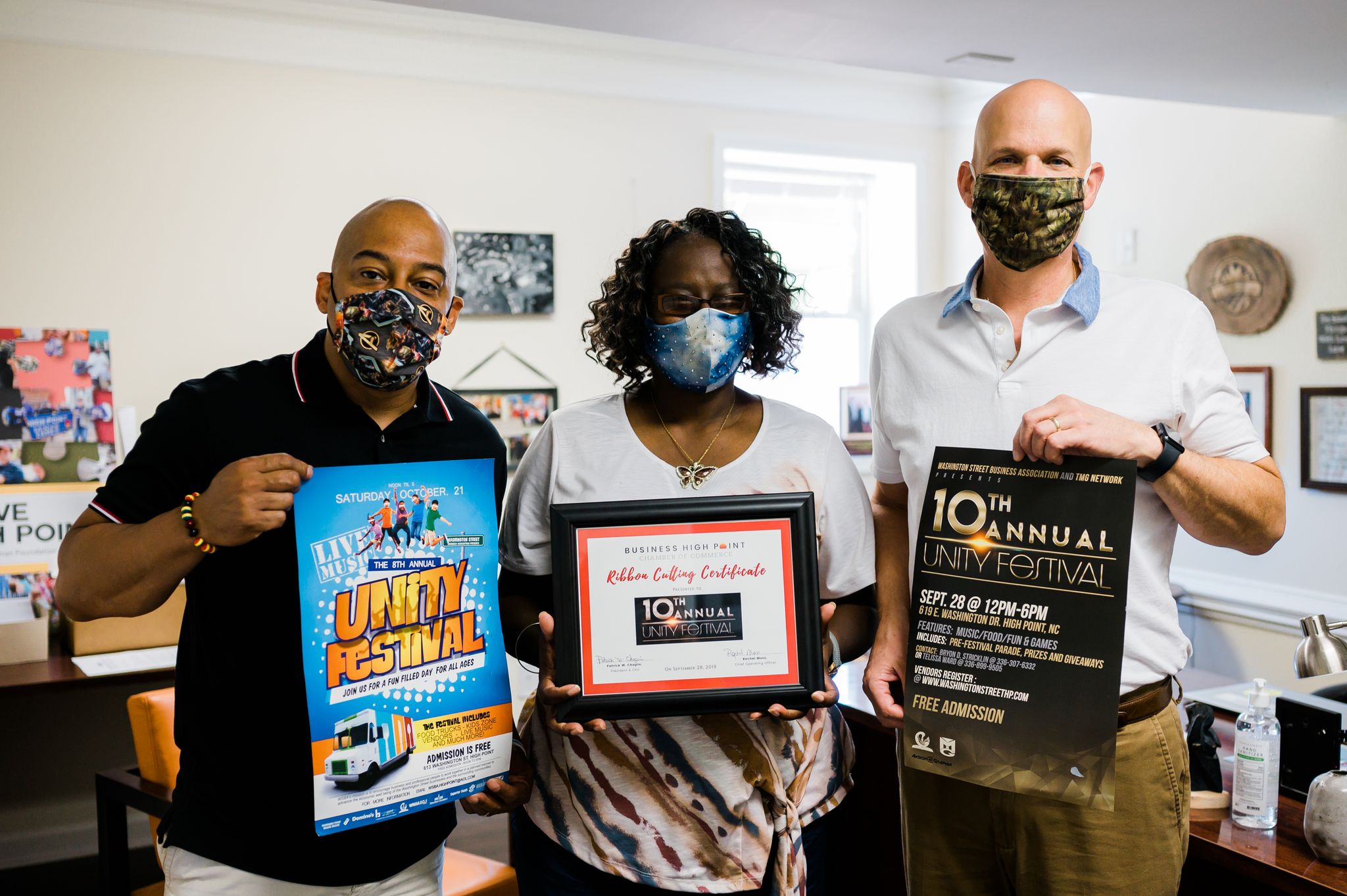 Despite the excitement surrounding the 11th year of the Unity Festival, the members of WSBA realized months ago that their events line up for the coming year would most likely look very different. When they heard about all the cancelations of other events, they saw the writing on the wall for the Unity Festival.

“I thought, ‘If the Coltrane Jazz Festival is canceled, we’re in trouble,’” Telissa remembers jokingly.

The Association normally hosts at least one event in the community per quarter, whether that’s a music event, a talent show, a fish fry, or a wine down event for High Point Market guests.

“We’ll go back around and revisit those event ideas in years to come,” Telissa says. But in the meantime, the organization knew they still had to do something this year to be a presence in the community – because 2020 hasn’t just been about COVID-19.

“In the wake of social evolution going on, as well as conversations around race, we wanted to stay relevant, consistent, and practical,” Bryon explains. “We took it upon ourselves to look at the climate and condition of the community.”

And they found a cause closely aligned with their mission for community engagement and improvement: voter turnout.

“To increase equity and fairness, you really just need to participate in voting,” Bryon says. He notes that there are around 15 million more eligible voters in the United States, and the WSBA wants to encourage as many as they can to participate in the political process.

“We don’t want to tell anyone how to vote,” he adds. “We just want them to vote their own convictions and beliefs.” 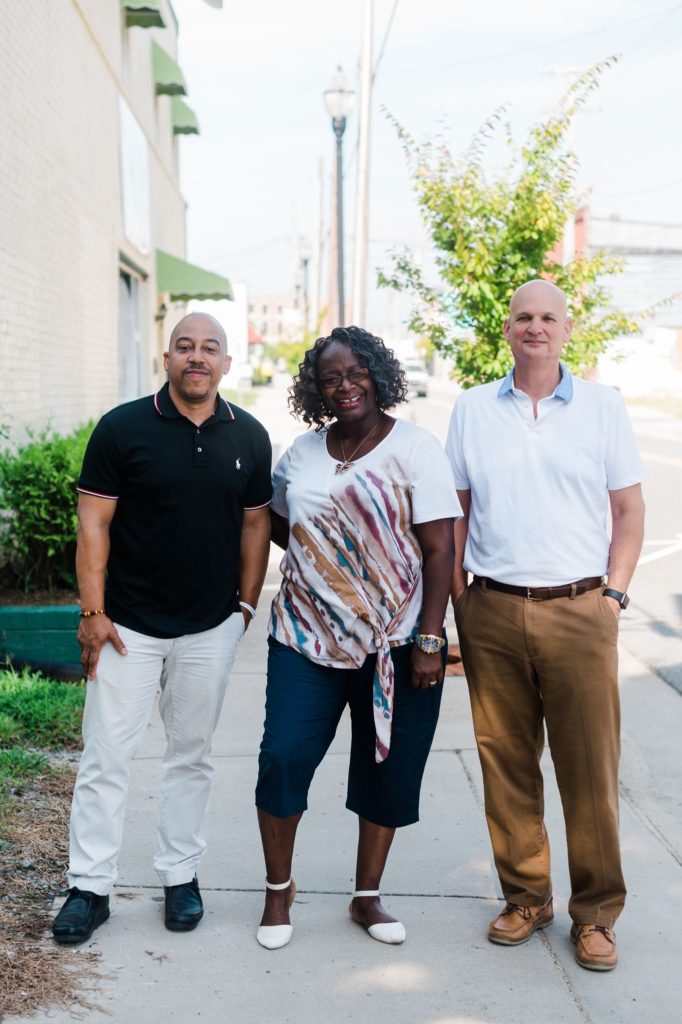 The Association team also points out that this event speaks directly to one of their aims to create youth-focused opportunities, by encouraging young eligible voters to take action in the political process.

“We want to keep growing this body,” Telissa says. “We’re small but powerful.”

This event, unlike others, is one that can be hosted safely and with social distancing taken into account. Registration tables will be open all afternoon, allowing for a phased approach to avoid big groups.

The WSBA members also hope that events like these continue to open doors to have conversations in the community. Bryon adds that WSBA wants to “connect across the aisles” of city and social groups, allowing all parties to share, communicate, and partner to see real improvements in the community.

“I think communication starts with people being open and transparent,” he says. “We need to understand that we all want to improve the quality of life for ourselves, for our families, and for our city.”

If you haven’t registered to vote or you want to start a conversation with how to get involved with the Washington Street Business Association, stop by the registration dive taking place this Saturday, September 26 from 12pm to 4pm.

The drive will be held at Art by STM on 112 S. Main Street. Partnering with the Washington Street Business Association to host this event are Councilman Cyril Jefferson (representing the City of High Point); Hope 4 Humanity; FaithHealth, NC; Art by STM, Yalik’s Modern Art, and the Burns Hill Neighborhood Association. The NAACP will be also be providing masks for a safe registration experience.