If you meet Bert and Shirley Rau, you’ll soon learn they know the value of a good thing when they see it. Like the wristwatch that 96-year-old Bert wears, a government-issued timepiece that saw 13 aerial combat missions over Europe during World War II. The watch was given to him by one of his best friends, whom he first enlisted with into the U.S. Army, back in 1943. Bert still wears it almost daily.

Or, like the superb sofa in the Raus’ home, the first-ever piece of furniture they bought from Thayer Coggin, Bert’s first account after he signed on to work as a textile sales rep for Craftex Mills back in the 1950s.

But if you meet Bert and Shirley Rau, you’ll realize they value much more than just the possessions they’ve owned or the experiences they’ve had. What they value most is their family and each other. 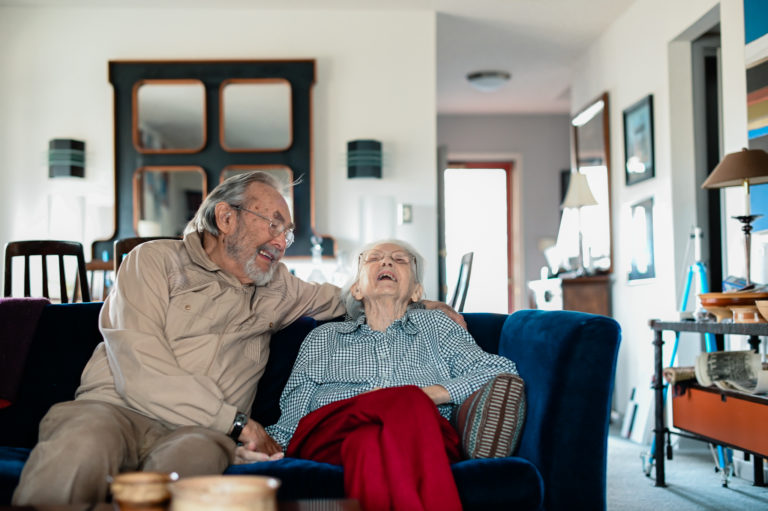 After being married for more than 71 years, it’s pretty clear they know a thing or two about loyalty and love. And yet the Raus would be the first to admit that their story began pretty ordinarily, back when they went to high school together in Mount Holly, New Jersey, a town of around 7,000 people.

“Everyone knew everybody, pretty much,” says 94-year-old Shirley. “At least that’s what your mother said, so behave!”

In their small town, Bert and Shirley had known each other in school. Their older sisters were good friends, and Bert used to walk Shirley home from school. But even then, neither seemed to think their friendship was destined for a life of love.

“He used to walk me home from school… But that didn’t amount to anything! I was on the way to his dad’s office!” Shirley laughs. “I don’t think he even carried my books. I carried them myself.”

“I didn’t want her picking up any bad habits,” Bert teases back. The couple is quick to joke, laughs easily, and both share a sense of wit. But Shirley insists that for them, there was no such thing as “love at first sight.” In fact, they couldn’t even tell you exactly when they started dating. It seemed to them as if it just sort of…happened naturally. 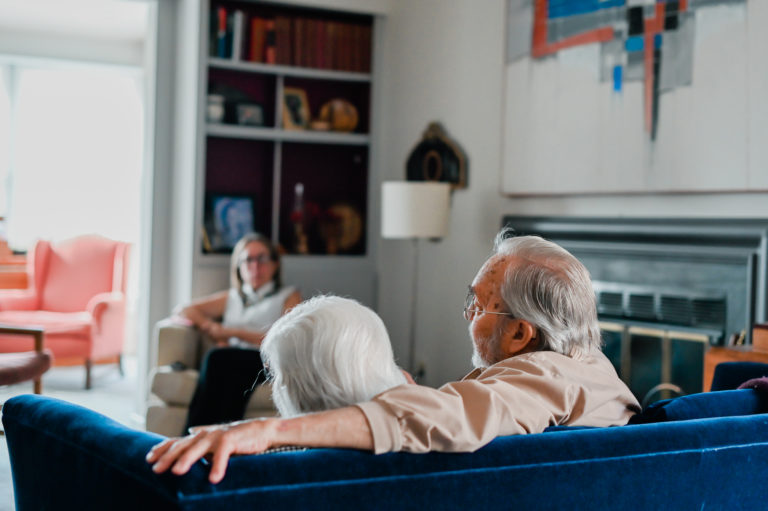 When Bert enlisted in the army in 1943, and was then sent to Europe where he would fight in the Battle of the Bulge, and for the balance of his four-year enlistment, Shirley wrote letters faithfully to him. Even when she and the local girls would visit USO soldiers at nearby Fort Dix. She’d serve coffee, dance with soldiers, and help them write letters home. As Shirley searches for the words to describe her attitude at the time, Bert cuts in.

But Shirley found that none of those soldiers interested her. And when Bert came home from the war, they got formally engaged and were married in the summer of 1947. When questioned on the story of their decision to marry and their engagement, Bert laughs.

“I think I proposed to him,” Shirley admits, “because I had already picked a wedding date!” 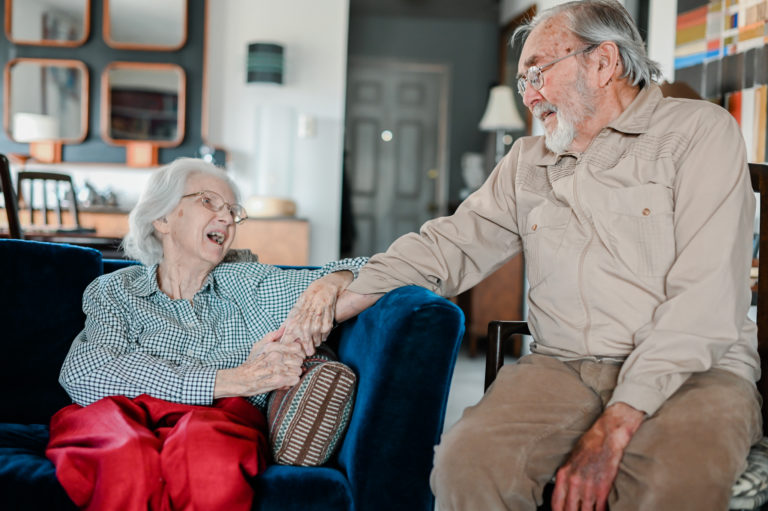 After the two married, it wasn’t long before they started to make career moves. Bert, who graduated with a degree in textile engineering from the Philadelphia College of Textiles soon took a job in New York City, and later Detroit, working for Ford Motor Company as an automotive textile buyer. But after spending some time shadowing a sales rep, he realized that career path was more appealing to him. He was then hired by Craftex Mills to rep their home furnishings fabrics all across the southeast. So the Raus picked up again, and moved to High Point on Thanksgiving Day 1958. And they’ve been part of our community ever since.

Once in High Point, the Raus found themselves surrounded by interesting people in the industry who became some of their close personal friends. Besides Thayer Coggin and his wife, Dot, the Raus also became close to Milo Baughman and Norman Heckler, acclaimed furniture designers.

And it was Norman Heckler who noticed that Shirley had a talent that the furniture industry could use: showroom design. Having painted since she was a child and having been taught in high school by Ida O’Keeffe (sister to the famous Georgia O’Keeffe), Shirley had a talent for visual arts. Heckler connected Shirley with the furniture company, American Drew, and it wasn’t long before she began designing showrooms for them as well as their sister companies, like Lea, Daystrom and Pontiac. 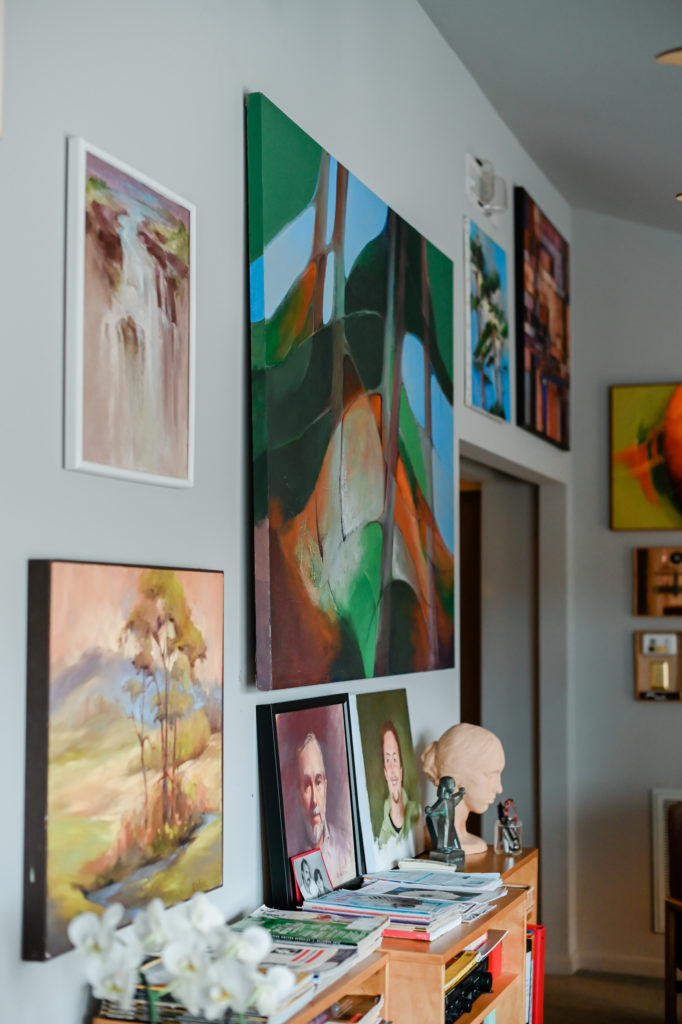 If there wasn’t the right piece of art with the right color palette for one of her showrooms, Shirley would simply paint a piece herself. It was from this experience and career that Shirley and Bert eventually founded their own showroom and sales company, Rauhaus, which their daughter Joanne, still operates to this day.

Bert calls Shirley’s job as a showroom designer, natural. Shirley remembers her father would often joke that he never went to bed without keeping a light on, because her mother might have rearranged the furniture as he slept. The Raus themselves have redesigned and renovated every home they’ve lived in.

“I’ve always said they put all the doorways in the wrong places!” Shirley laughs.

Even though the Raus have seen notable changes to High Point throughout their lives here, one thing they’ve always been thankful for is the community. Seeing it grow from a small town to an internationally-recognized city with hotels and restaurants surprised and delighted them. And the people they’ve met through the furniture industry are some of the most interesting they feel they could have met.

Both Bert and Shirley look back at their careers with a sense of gratefulness and humility; they attribute their long marriage to this same attitude of contentment.

The two recount ways they chose to save money through the years and never go into debt, and Bert says, this is one of the biggest contributors to a successful marriage. Sharing what they had, being content to wait until they could afford other things, and never keeping secrets are some of their lasting life lessons.

“You just get used to each other’s idiosyncrasies, and there’s enough love to tolerate it. You say to yourself, ‘he puts up with me, the least I can do is put up with him,’” Shirley exclaims. 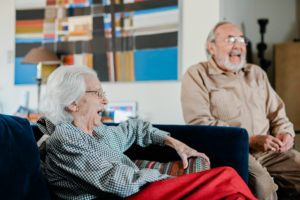 If they’ve had any arguments over the years, they only remember the ones about home projects they were working on together. Shirley, always the visionary, would take the artistic approach.

“I want plans and measurements. Hers was a different world,” Bert explains.

But they never let those things divide them in their marriage.

“Some things aren’t worth worrying about,” Shirley muses. And after coming back from the war, Bert says there’s not a day that goes by that he doesn’t find himself grateful to be alive.

The Raus still have a full life, living independently, going grocery shopping on their own and having family over for dinner on a weekly basis. When asked how they feel these days, the response is quick.

“I feel wonderful! Do you feel pretty good?” Shirley asks her husband. He laughs and responds, “I have no quarrel!”

“We are as independent as these girls help us,” says Bert. The Raus’ two daughters, Joanne and Barbara, have been married for around 40 years each, as was their brother John before he passed away a few years ago. It’s obvious all three of them were influenced by their parents’ long, dedicated marriage. And even after several moves and career transitions, the Raus still prioritized staying in touch with and visiting their families in New Jersey.

“We’ve been lucky,” Shirley says. “We have a good family; they look after us.”

Now looking back on their long marriage together, Shirley says the word that describes it best is “comfortable.” When asked why they’re still married to this day, Bert laughs. 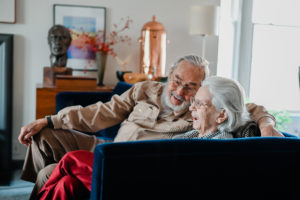 And after 71 years, the Raus have lived much more of their lives together than apart. They’ve grown up together, and they’ve found that even when the “love at first sight” moments don’t happen, or the butterflies fade, or the times get tough, you keep persevering.

“You learn forgiveness,” Shirley says. “It’s a process of growing up. You begin to mature yourself and forgive yourself.”

And through the forgiveness that they’ve learned and maturity they’ve found, the Raus have developed the most profound sense of loyalty, friendship, and abiding love.

“We’ve been married a hundred years!” Bert jokes. Their daughter Joanne reminds her parents they have only been married three quarters of a century. But Bert insists that they intend to make it to their 100th wedding anniversary.

And it wouldn’t surprise us at all to hear that they do indeed celebrate that 100th anniversary. Because the Raus know best of all, you hold on tightly to a good thing in life when you get it.