Claudia Shivers, owner and operator of Queen Coffee Bean, has learned that coffee and gratitude have a lot in common.

"How can you build community and show your ultimate gratitude?” Claudia asks. She answers that with coffee. "It gives you a little energy... and when you have gratitude, you get energized. Sometimes you start out in a dark, hot place, and then you get energized. And then there you are: you're a whole cup of coffee!”

For Claudia, her dark, hot place was a federal prison in West Virginia. After being indicted on federal tax fraud charges, Claudia faced 11 months in prison. That 11 months gave her a lot of time to explore her life and her feelings – shame, embarrassment, and anger.

“I learned I’m not better than anybody and I’m not entitled to anything,” Claudia says, reflecting back. 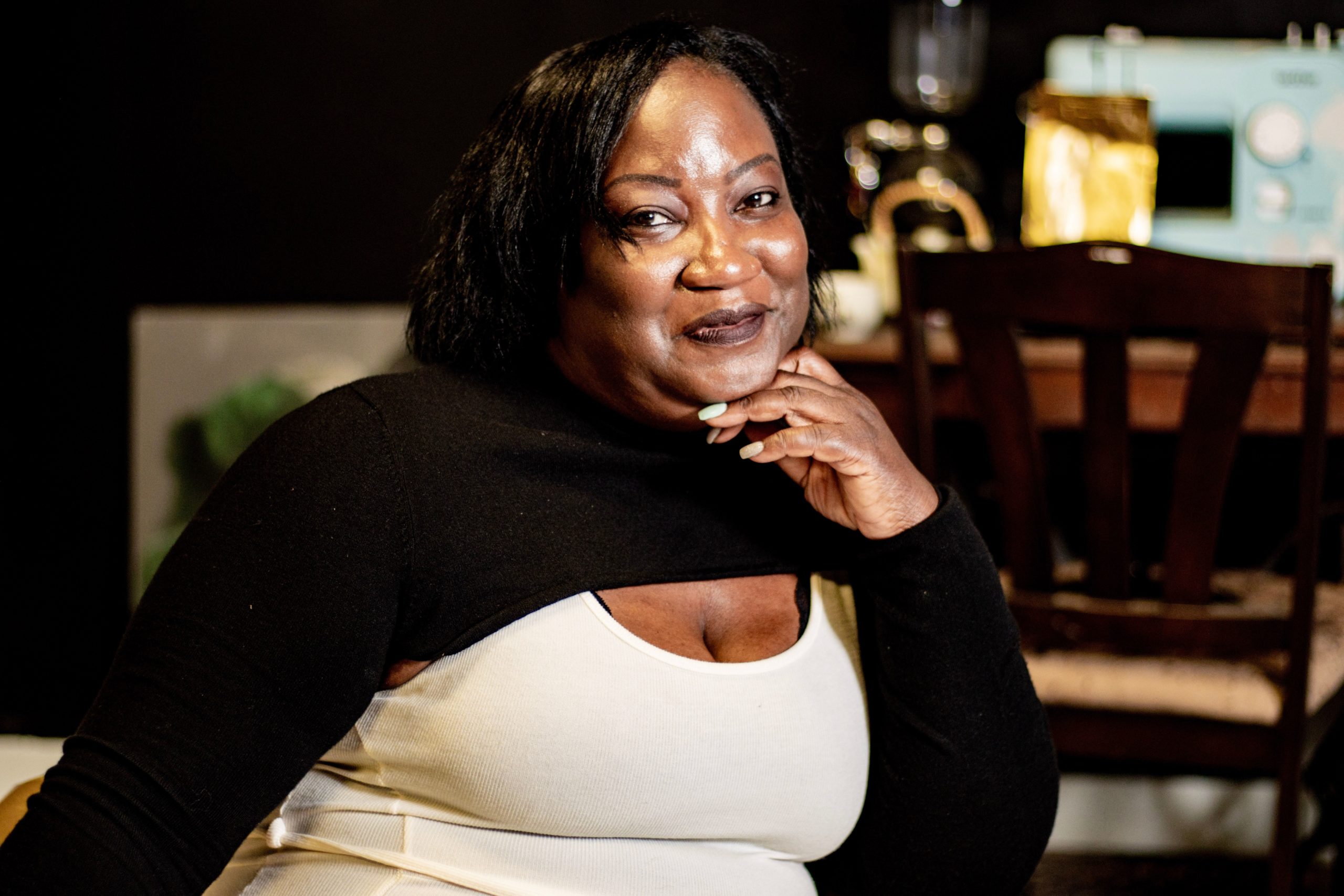 She laughs now, remembering how often she would complain about how she didn’t deserve to be in prison – that is until a fellow inmate said to her one day:

“Shivers, I wish you would shut up. Because no matter what happened, you’re here with us.”

That moment showed Claudia that whatever mistakes were in her past, all she could do was move forward into her future with new resilience, new lessons, and a new perspective.

“If it’s not a mistake for me to be here, then I'm missing the message,” Claudia recalls. “You have to figure out what the message is.”

What seemed like a simple job led Claudia to begin thinking about how she wanted her life’s path to unfold after she was released from prison. While other inmates watched TV, Claudia began extensively researching what it would take to open her own coffee roastery. She began studying the process, the beans, and the global market.

But when it came time for Claudia to finally return home, she found herself discouraged by what looked like an uphill climb to return to “normal life.”

But the people in Claudia’s life refused to let her wallow. For starters, her grandparents, whom she moved in with to care for, spent the remainder of their lives encouraging Claudia. She reflects now that had she not been to prison and returned to live with them, she would have missed spending their last days with them. 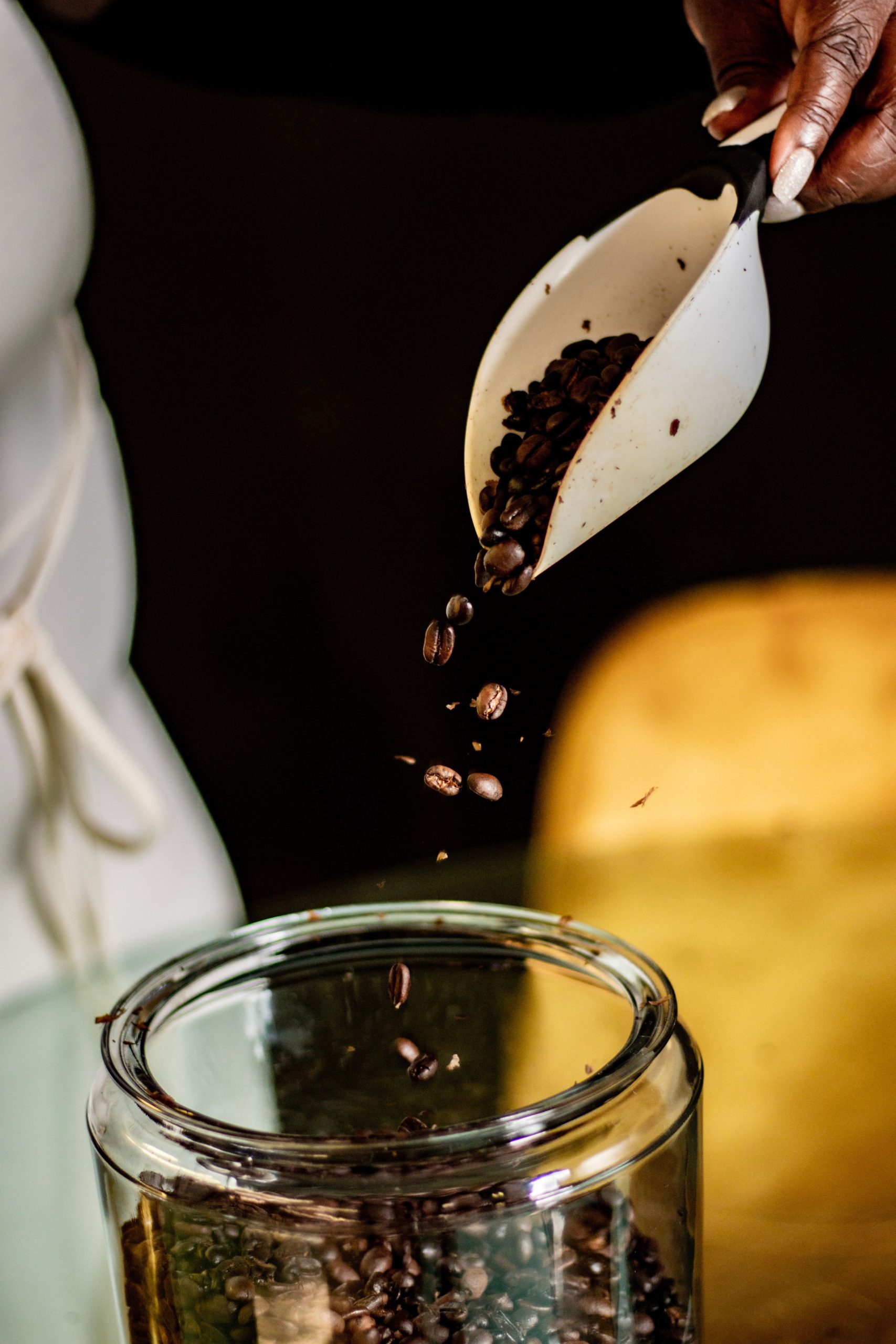 “From the first day I came home, they were at my house,” Claudia recalls. Semora and Phil Bittle, who own a trucking company in High Point, encouraged Claudia to come explore their warehouse space and see if she could make its breakroom work for her dream of opening a coffee roastery.

“I came to look at the space... there was nothing in there but the cabinets,’ Claudia says, “but I said, ‘That’s the most beautiful coffee roastery ever!’”

Maybe Claudia’s family knew her better than she knew herself – her sister always says, "if you take an idea to Claudia, she’ll make it be” – because that blank canvas of a warehouse breakroom was all Claudia needed to start putting into action the plans she dreamed up in prison.

She also started working at her former job at Starbucks temporarily and found herself learning lessons of gratitude and selflessness that would serve her well. 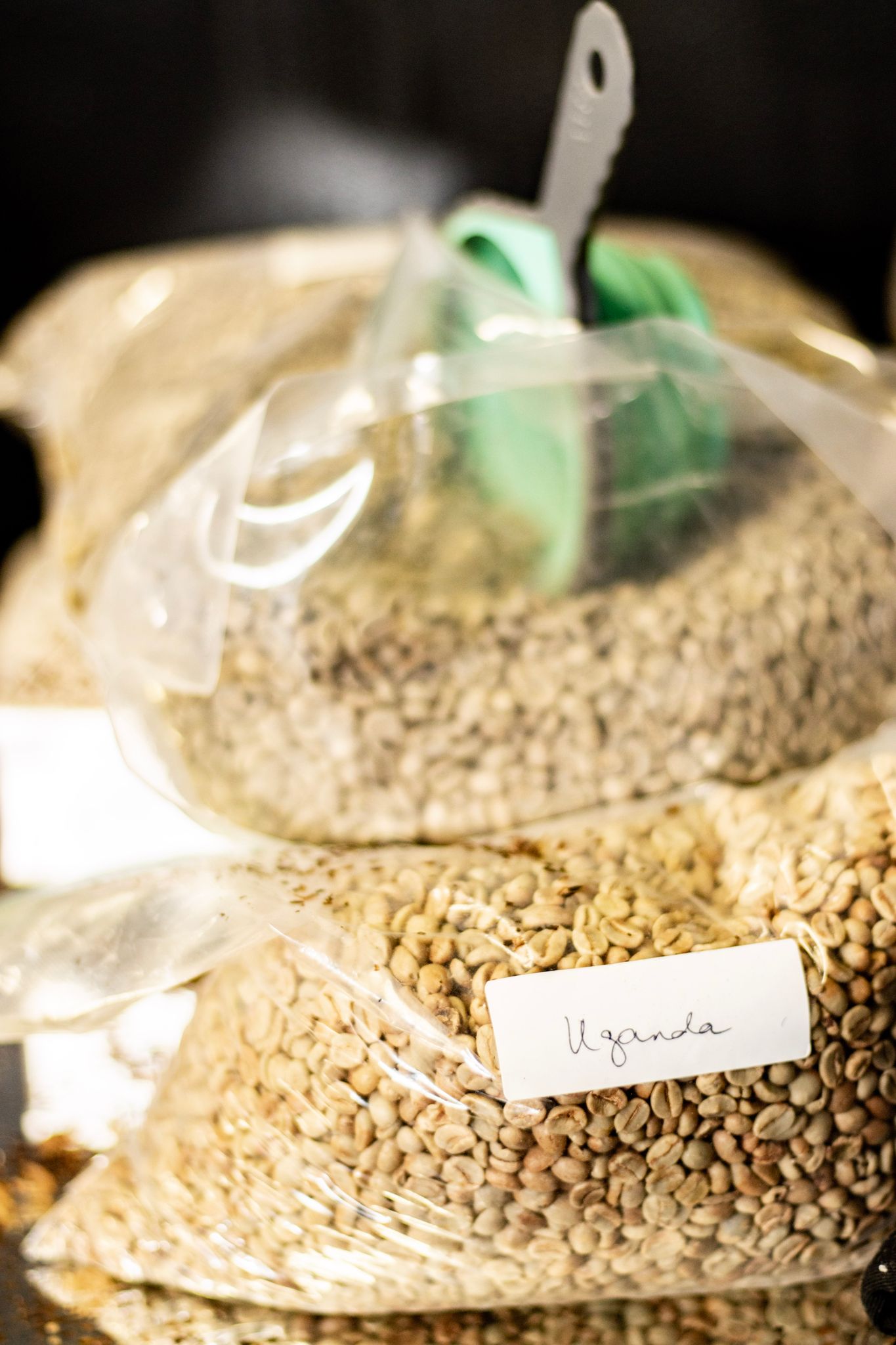 “Coffee allowed me to stop thinking about myself, and what I had going on in a negative way,” Claudia says. “Instead of thinking, ‘What’s going to happen in my life over the next year?’ I thought, ‘What happens to my customer’s life in the next three-minute transaction? And how do I have a great impact in three minutes?’”

While Claudia had a good baseline of knowledge for coffee brewing from her time at Starbucks, coffee roasting was a whole new challenge. She started by buying a popcorn popper and one bag of Guatemalan beans. After several rounds of roasting (and burning) beans, Claudia realized she didn’t much like the flavor of Guatemalan beans. But as she began to explore African beans, she noticed subtle flavor differences she was able to extract from the roasting process.

“You learn how to taste the beans because all beans aren't the same,” she explains. “When you read something that says beans taste differently when they grow at different altitudes, those are just words.”

It took some burned and ruined beans for Claudia to discover the reality behind her research – to really uncover what her palette liked.

“You’ve got to spend time with your beans!” Claudia laughs, saying that the best coffee roasters know what the beans should taste, smell, look, and feel like after roasting. She says there are no shortcuts to coffee roasting. The lessons of patience she learned through former mistakes led her to take her time with her beans.

“I've had enough faith and confidence to stick with the process,” she says. “Even though it looks like a catastrophe right here in the middle, that's just part of the process."

She discovered the rich chocolate and nutty flavors in African beans and the subtle pairing flavors of Sumatra. Now she has created her own bean blends – like Ethiopian cinnamon buttercream and chocolate cherry.

She also “experimented” with flavors and combinations for other palettes, making her friends and family constantly taste-test with her. Through those connections and conversations about coffee, Claudia began to imagine something more than a coffee roastery, even more than a coffee shop.

“It’s a coffee space,” Claudia describes. She envisions a space that allows people to learn about coffee, to be educated about the regions around the world that supply our coffee. And she envisions it as a space where two people from very different backgrounds could come and sit together and learn about each other as they bond over one shared love: coffee.

“I want it to be a space where you're encouraged to talk to each other," she says. “In this space... everybody feels comfortable coming in this space, hanging out, being comfortable with whoever is here, and then offering their input. Because coffee is about community, right?"

“Coffee allowed me to stop thinking about myself, and what I had going on in a negative way. Instead of thinking, ‘What’s going to happen in my life over the next year?’ I thought, ‘What happens to my customer’s life in the next three-minute transaction? And how do I have a great impact in three minutes?’” 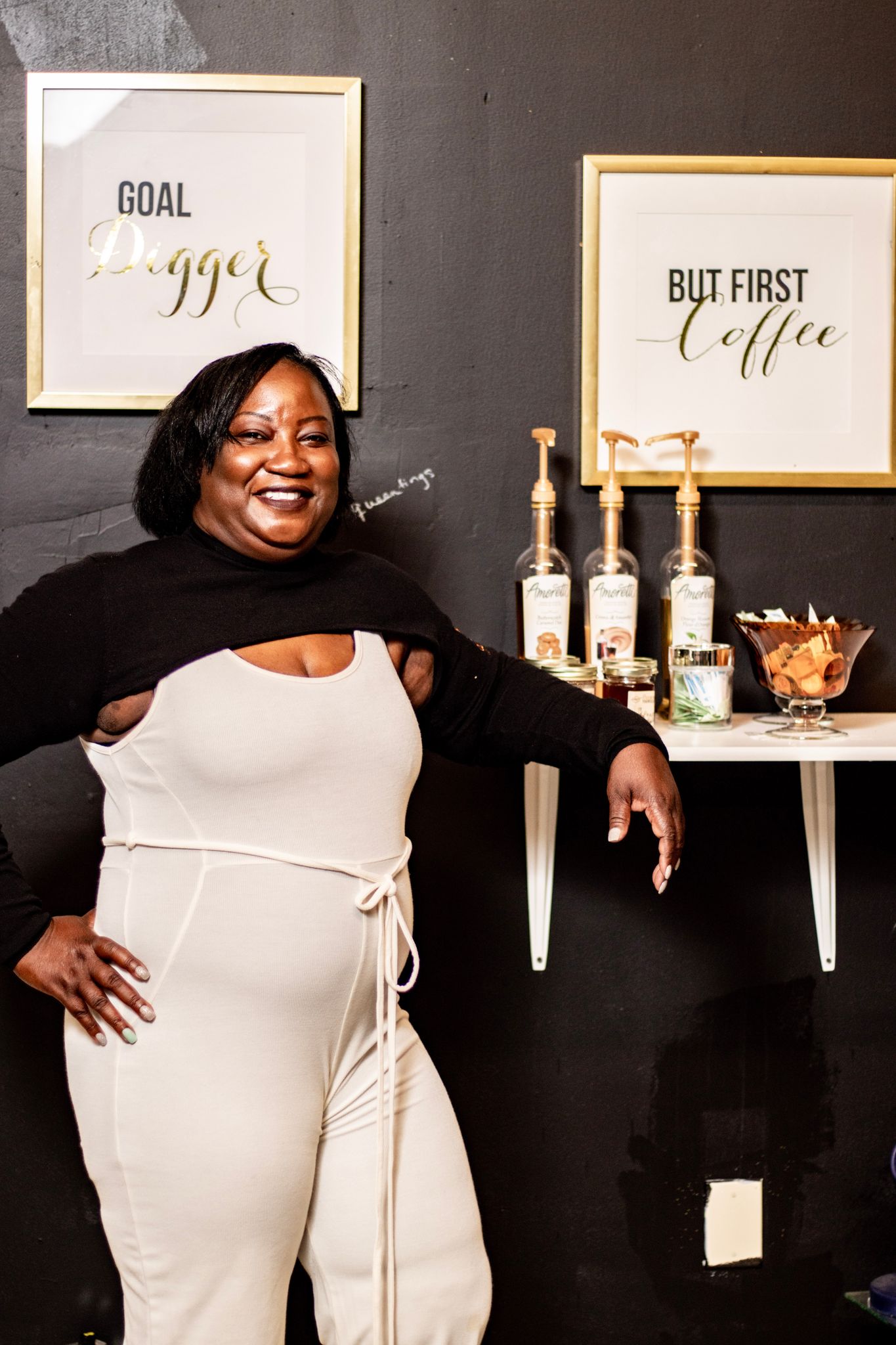 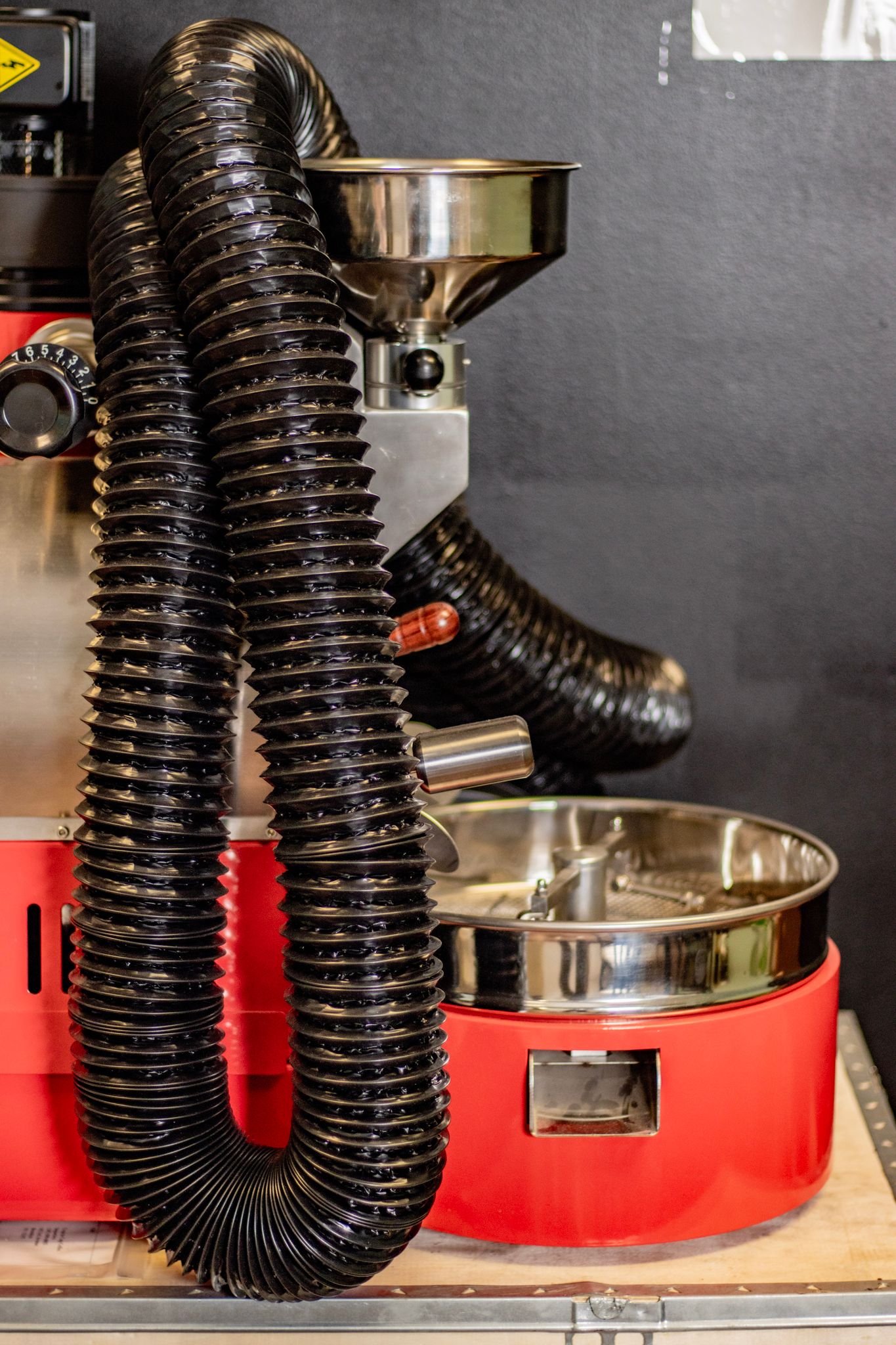 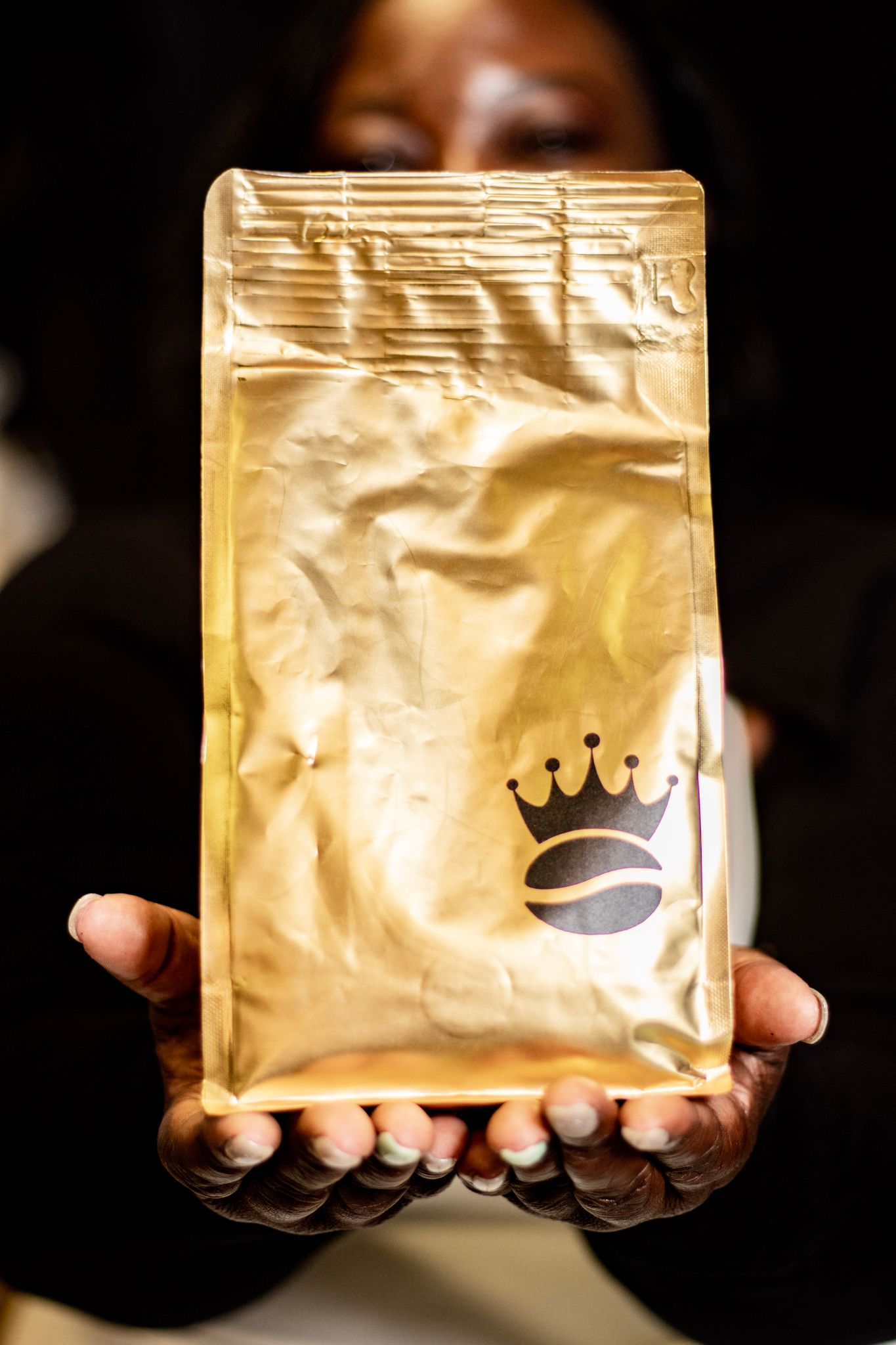 As Claudia began to outgrow her space in her family’s warehouse, she had her eye out for the location of this upcoming “coffee space.” When a spot opened at 1200 Eastchester, Claudia jumped on the opportunity.

Now her long-term goal for her business, Queen Coffee Bean – named after her grandmother, Queen – is to help underserved communities start their own coffee roastery businesses, while partnering with coffee farms around the world.

“Coffee farms can help rebuild communities,” Claudia says. “You can build an economy around coffee.”

Her creativity and visionary nature has her picturing shipping container roasteries in underserved neighborhoods where citizens are taught a transferable skill like coffee roasting.

“At the bottom of every latte is a coffee bean,” Claudia says, explaining that when you are a coffee roaster, competitor coffee shops actually become customers. She also sees coffee roasting as having a multi-generational impact, as parents and their older children could learn the skill together.

“When you walk outside and that’s the business you look at, it doesn’t uplift you,” she adds. A business with the appeal of a coffee roastery and shop not only provides interest and inspiration for those in the neighborhood, but it begins to draw customers from outside the neighborhood to bring money in.

It’s no surprise with her mind for ideas that Claudia is a firm believer in the power of entrepreneurship and business ownership – especially for women and minority business owners. 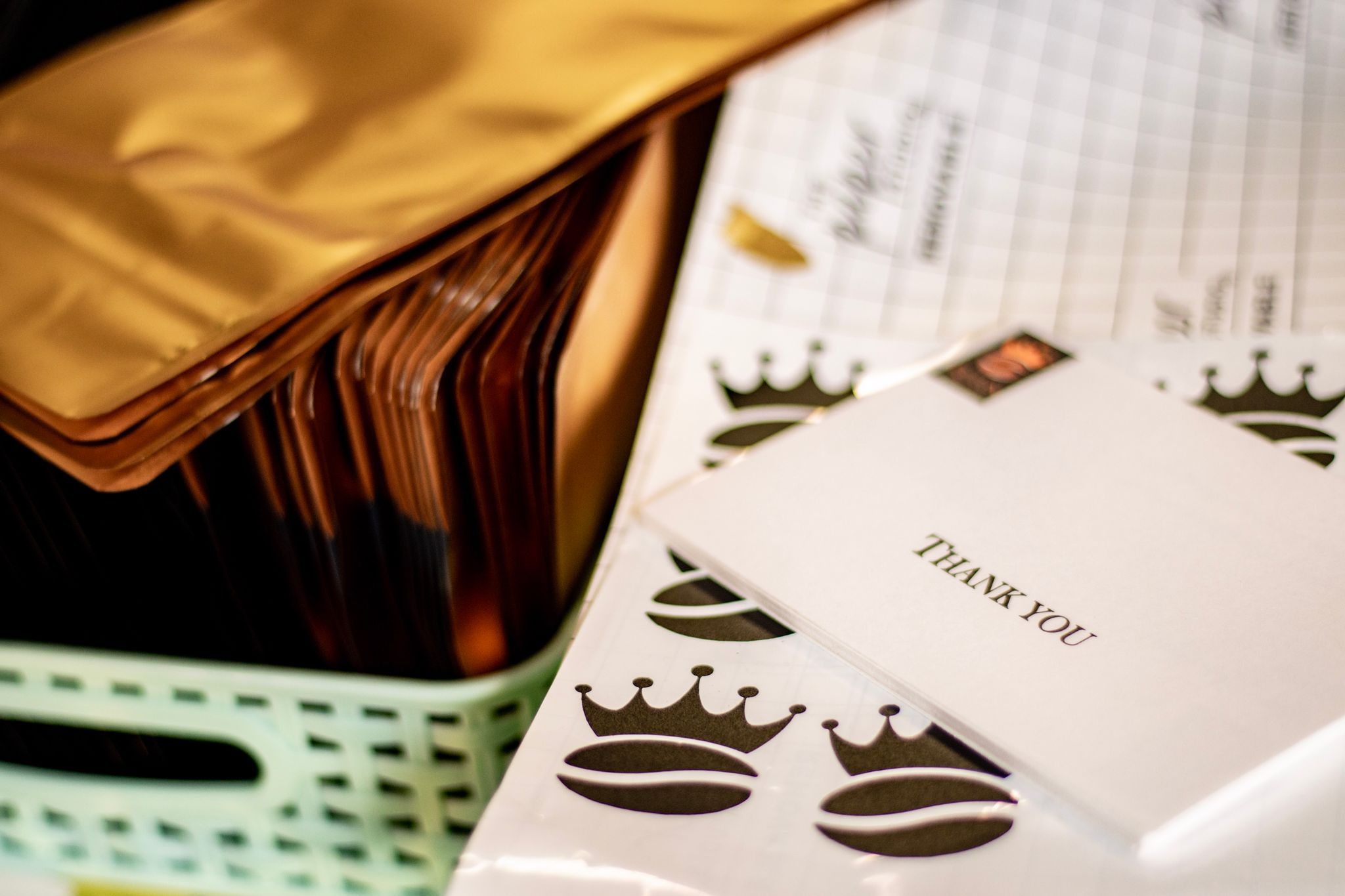 For Queen Coffee Bean, Claudia has already employed the services of her friends and family to support their businesses and skills, like her brother who has designed her logo, branding, and marketing materials. She notes, especially for women, it’s imperative that they support each other’s businesses, as women statistically struggle to find investors more than men.

“Every woman – especially women entrepreneurs – should have some kind of money set aside to invest in another woman's business,” Claudia believes. “Even if the only thing you are is their best customer.”

For Claudia and Queen Coffee Bean, she knows that real business growth happens just like the perfect cup of coffee – when all the elements blend together to provide harmony – purpose, gratitude, patience, and support from your community.

Visit Claudia at her temporary location at Calvary Church - Cafe 1665