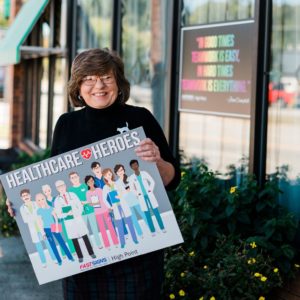 Joan Campbell isn’t one to sit back and wait for things to happen. In fact, her entire job revolves around turning ideas into realities. As Sales Manager and Sign Consultant at FASTSIGNS of High Point, Joan takes customers’ visions for their sign or banner and helps them incorporate design concepts, branding, colors, fonts, and more. (Although she’s quick to claim she’s not much of an artist, referring back to a sketch of a Volkswagen Bug she once doodled that was mistaken by one of FASTSIGNS graphic designers for a hippo.)

“I am not an artist,” Joan says, “but most of the time people get what I am trying to convey.”

Like her sign sketches, Joan believes ideas need to be put into action, and those actions need to be connected to the greater good. For some, mixing business and good deeds may not come naturally, but for Joan and FASTSIGNS of High Point, this value is woven into their company DNA. Both Joan and FASTSIGNS have been longtime members of Piedmont Triad Apartment Association, an organization seeking to holistically improve the living conditions of those in Triad apartment communities. Their work includes an annual food drive, originally co-Chaired by – yes, you already know who – Joan.

“I know that High Point is a food desert in many areas,” Joan says. “I was the first co-chair of the Food Drive Committee at PTAA and have served on the committee ever since.”

Joan says that Angela and Scott Riddle, current owners of FASTSIGNS of High Point, jumped in when she brought up the food drive. 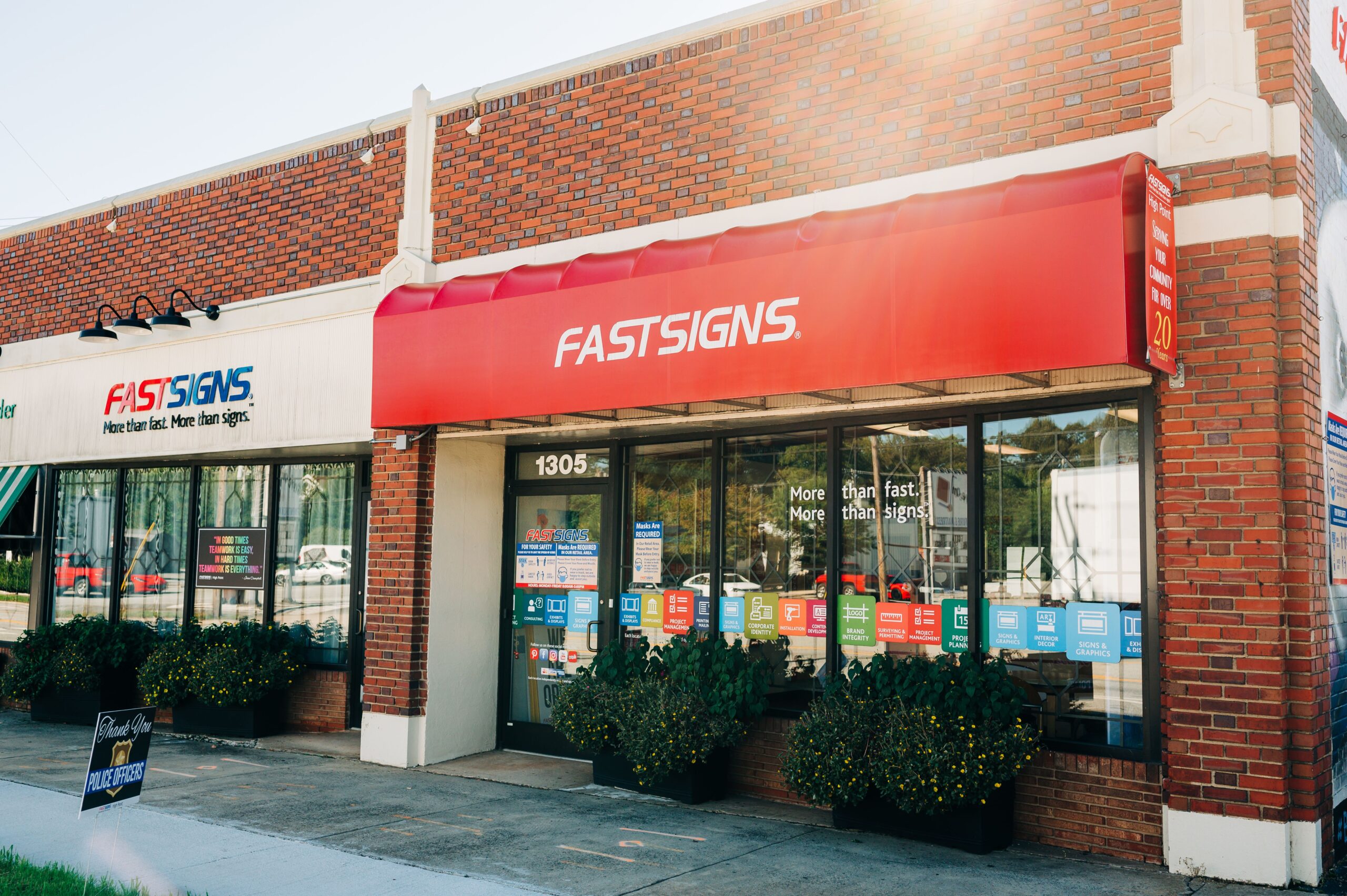 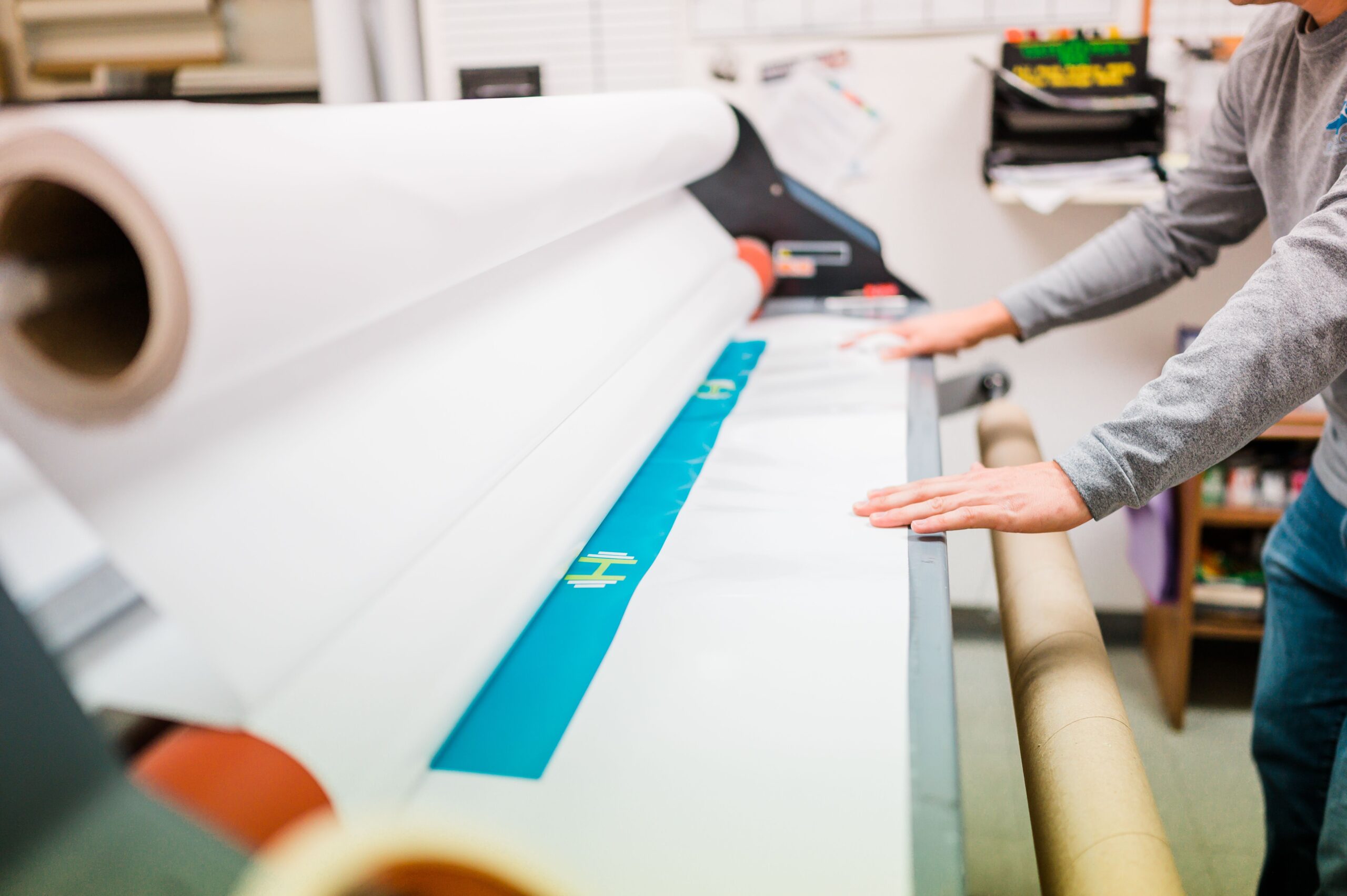 “FASTSIGNS has given me as much time off as needed to serve on the PTAA committee. Over the years we have donated banners, decals, and canned goods. As individuals and as a company, we have also donated money to Second Harvest Food Bank of Northwest NC through PTAA’s Food Drives.”

Second Harvest Food Bank is an organization that works across the state with grocery assistance partners, gathering food donations and grocery overstock to supply food pantries and distribution centers in food-insecure areas of North Carolina. Organizations in the Triad like The United Way, Open Door Ministries, West End Ministries, The Salvation Army, and many church food pantries, all rely on donations from Second Harvest.

“FASTSIGNS of High Point believes no one should ever be hungry, and the need in High Point is great. We believe in Community First, Community Always,” Joan says, referencing the initiative put into place by Business High Point. “We do what we can to help.”

Joan and her team at FASTSIGNS began to ask what “help” in High Point would look like in this season of COVID-19, and Joan did what she does best: turned a problem into an idea and that idea into action.

“Two of us came up with the idea of making ‘Thank You’ signs to raise money for Second Harvest Food Bank,” Joan explains. These “Thank You” signs were designed with messages of gratitude and appreciation for essential workers, healthcare workers, and emergency service workers, and the proceeds went to the PTAA-sponsored food drive for Second Harvest. 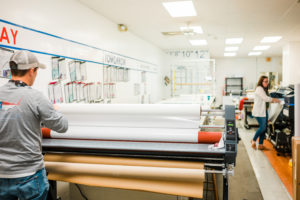 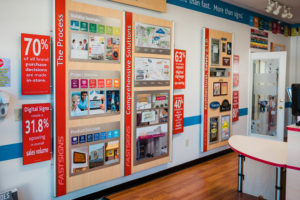 Inside of the Fast Signs store, a wall display of several price options and sign choices.

“We decided it was a win-win,” Joan says. “First responders, healthcare workers, and essential workers would have visual support driving to and from their jobs, and Second Harvest would receive some desperately needed funds.”

Joan and her team eventually decided to also sell signs celebrating the graduates who lost their traditional commencement ceremony to COVID-19, so the funds from these signs also supported Second Harvest.

“Between the ‘Thank You’ sign campaign and then the graduation sign campaign, we sold about 100 signs,” Joan says – not to mention that she chipped in personally and the Riddles matched all proceeds raised to donate to the drive.

This year the PTAA has extended its usual summer food drive efforts, anticipating an increase in food insecurity with fewer students returning to school.

“The recent outbreak of COVID-19 has turned our world upside down – communities are hurting as individuals face job losses, families are staying home to stay safe… Every person in the Piedmont Triad has been touched with the effects of this crisis, and now more than ever, PTAA wants our friends and neighbors to know that we’re in this together,” says Stephanie Beeman, Communications Director at PTAA. “This year we took the food drive exclusively online, eliminated the competition aspect between communities in recognizing that they are experiencing their own various levels of hardship, and extended the length of the drive from the summer months to all of the year.”

Stephanie also points to the support of other High Point businesses like Blue Ridge Companies, Apartment Dynamics, and the High Point Rockers who have worked alongside FASTSIGNS of High Point in the food drive effort each year. Joan charges other corporations and businesses in High Point to remember how crucial their civic engagement is for the entire High Point community. 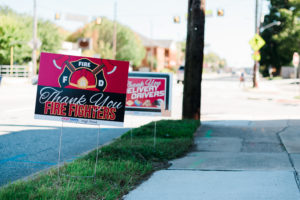 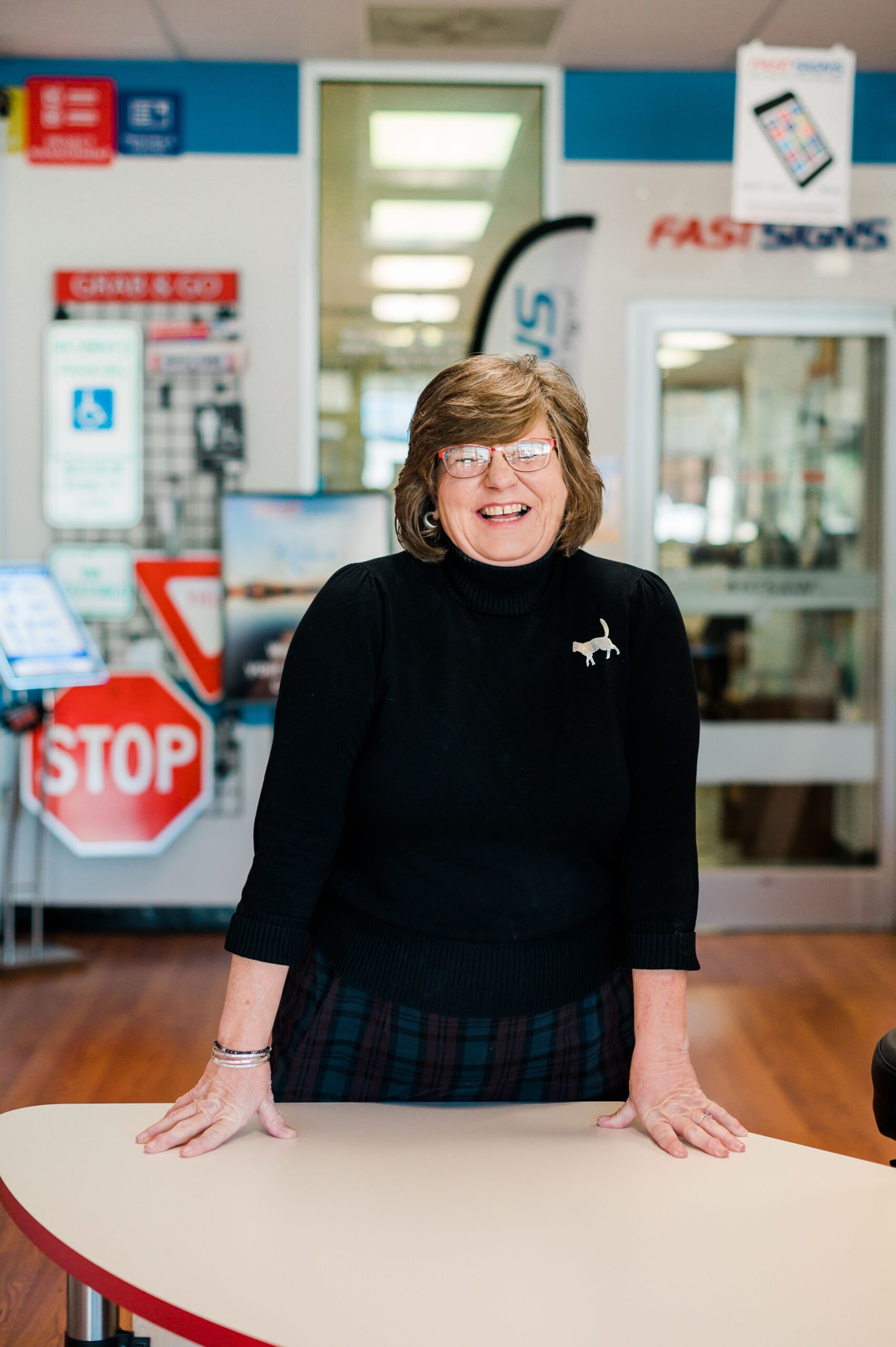 “Corporations that belong to civic or industry organizations that give back to the community become a part of the community, and it always ‘feels good to do good,’” Joan says. “Kids that are hungry while in school, do not perform as well academically as those children who eat well. Our future employees and leaders need an even start to help our community prosper and grow.”

For Joan, it’s not surprising that High Point businesses and organizations have been on the forefront of leading efforts like the PTAA food drive.

“High Point is special to me, because of its small-town feel,” Joan says. She notes how the city government and civic organizations are warmer and more personally involved than in any other place she’s lived. “If someone is in need, someone reaches out. This is a very caring and very generous community.”

Joan originally moved to High Point to work as the Catering Sales Manager at the Radisson downtown before transitioning to work in radio with the famous Max Meeks. Joan sold radio air time and wrote commercials, until she was approached one day by Mike and Mary McElvogue, the previous owners of FASTSIGNS, at a High Point Chamber trade show.

“Mary said, ‘Don’t sell air; come sell signs,’” Joan remembers. “I’ve been at FASTSIGNS for 20 years now. Mary and I were in Kiwanis together, and I never told her I was thinking of looking for another career. I think we were given a ‘sign.’”

As a High Point resident for more than two decades now, Joan points to personal connections she’s made here that have shaped the course of her life forever and given her countless opportunities to give back to her city.

From her membership in the Kiwanis Club to her church family at Wesley Memorial, to her involvement at Business High Point, the High Point Arts Council, the High Point Rockers, and more, Joan says she rarely enters a High Point establishment that she doesn’t see someone she knows.

“Friendly is my word for High Point,” Joan says, but we know that without people like Joan Campbell in our city, it would be just a little less friendly.

Want to get involved and give back like Joan and FASTSIGNS? Donate to PTAA food drive here . (The drive is hosted by Second Harvest Food Bank and donations made on the site go directly to their organization. Every dollar raised for Second Harvest will provide seven meals through food boxes and backpacks for families, children and seniors, as well as prepared community meals served to children and displaced hospitality workers. Check out Second Harvest Food Bank of Northwest NC and their partner programs in High Point here. Second Harvest serves the 18-county area of NC, including High Point.Learn more about the Piedmont Triad Apartment Association here.