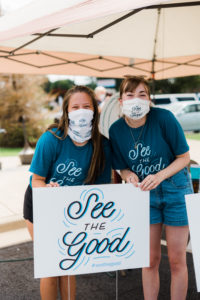 It all started with a stay-at-home order, an idea, and a sheet. Nearly six months ago now, when the stay-at-home orders went into effect for the state of North Carolina, the team at Barbour Spangle Design, a local interior design firm, knew they had to do something.

“As a company we said, ‘This is scary,’” Christi Barbour, co-founder and partner of Barbour Spangle Design recounts. “And as a company in High Point that believes in this community, we knew we had to put a message out there to spread positivity.”

Hours after the stay-at-home orders were announced, the designers at Barbour Spangle began to discuss how they could spread encouragement and hope to their community.

“We listed out so many different potential messages,” says Mary Crowder, Marketing Coordinator at Barbour Spangle. “We knew we wanted it to be short and meaningful.”

The message they chose? 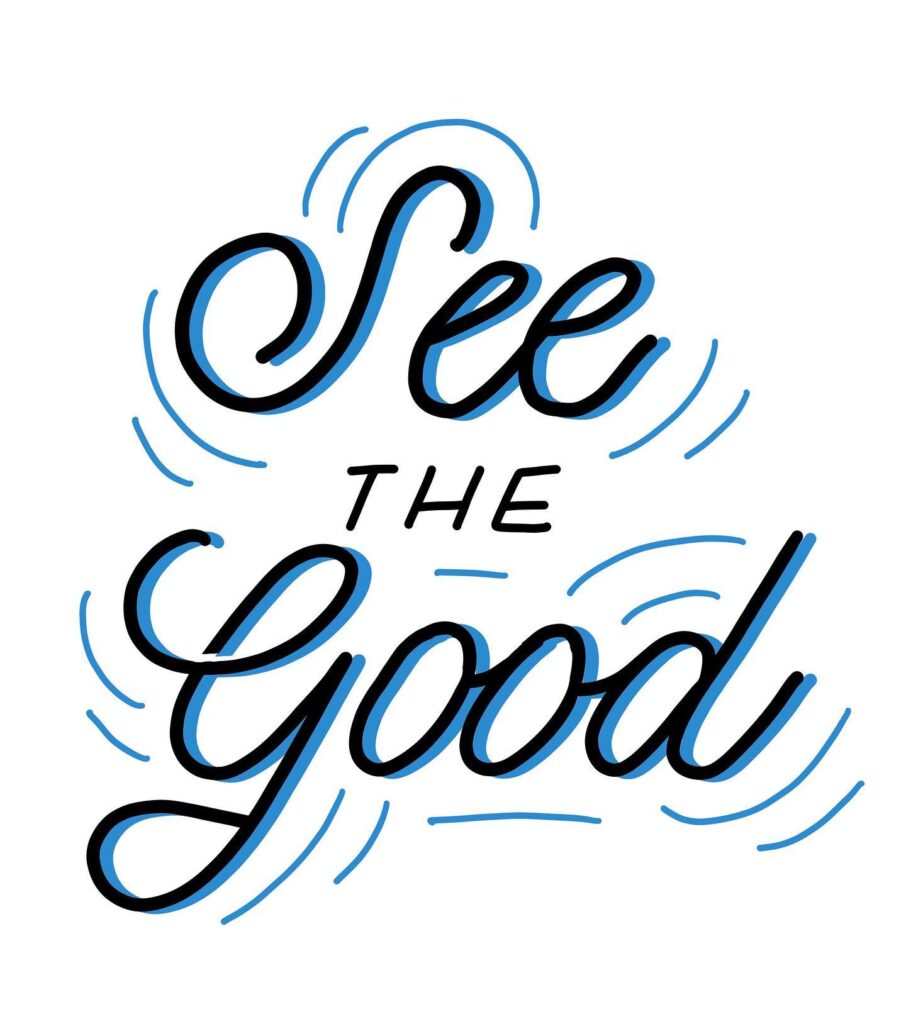 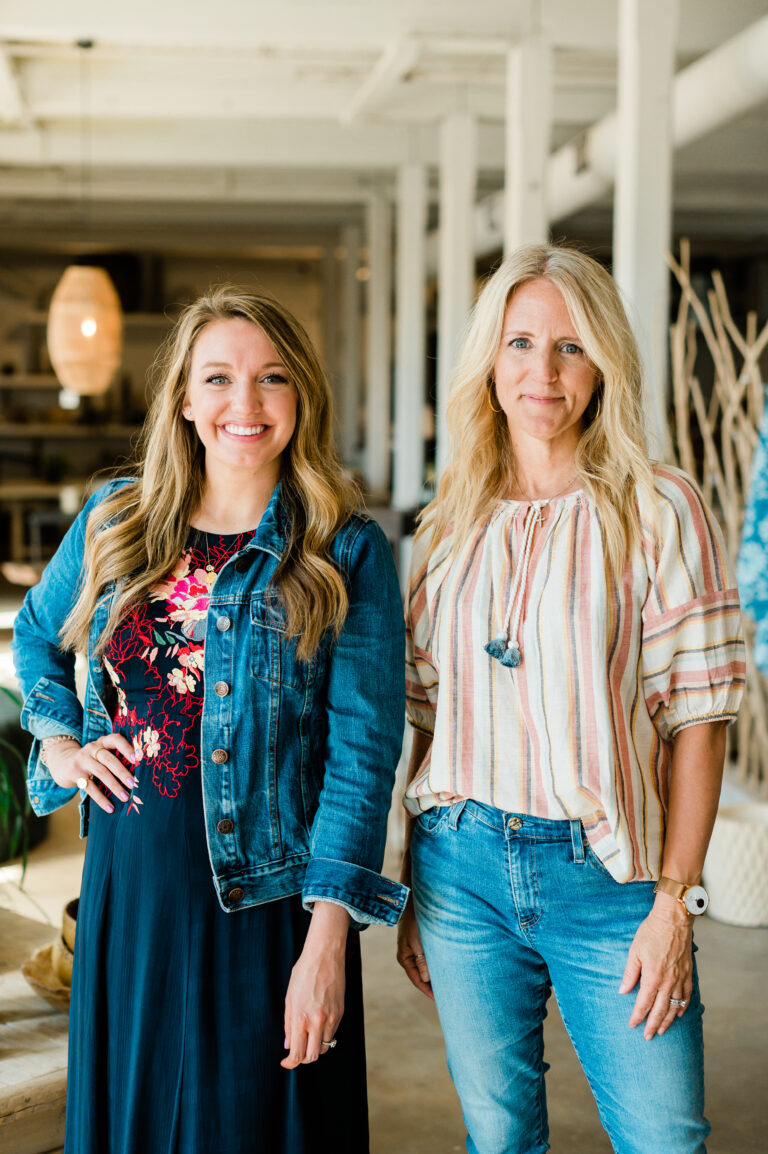 “We wanted there to be a message of a hope that says even with all that is taking place these days, there is still so much good that is going to come out of this,” Mary says. “Even when we’re only seeing the bad, there is so much kindness and good in this world.”

So with the message in mind, Mary, also a local artist who operates Southpaw Pen, made it her mission to get the word out.

“We knew we wanted to hang it on the building,” she explains. The Barbour Spangle building, located beside Truist Point Stadium and just minutes from High Point Medical Center was the team’s biggest resource for spreading a positive word – and spreading it fast. With the constant traffic passing by this High Point building as well as its proximity to our healthcare facility, it is uniquely positioned to share a message with High Pointers.

As the group tried to decide how they could make this big statement happen in a short amount of time, Mary had an idea.

“I was in a sorority, so I know how to paint a banner!” she jokes. So, armed with nothing more than a bedsheet and paints, Mary created the graphic and the banner that has started a movement. After a very late night of painting, the banner was hung – all within days of the stay-at-home orders.

“I stopped by the office early the next morning, and the streets were quiet,” Christi says. “It was eerie.” 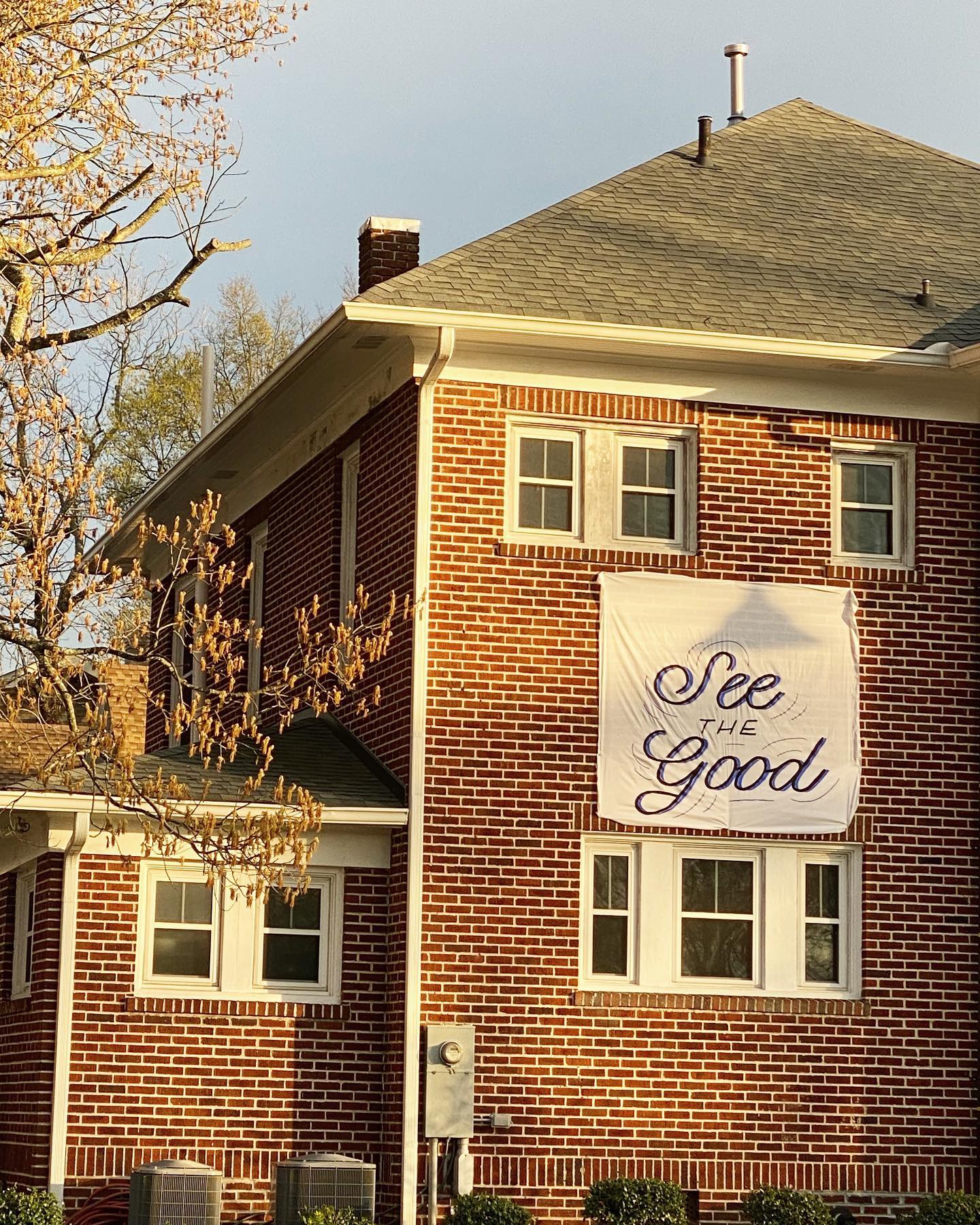 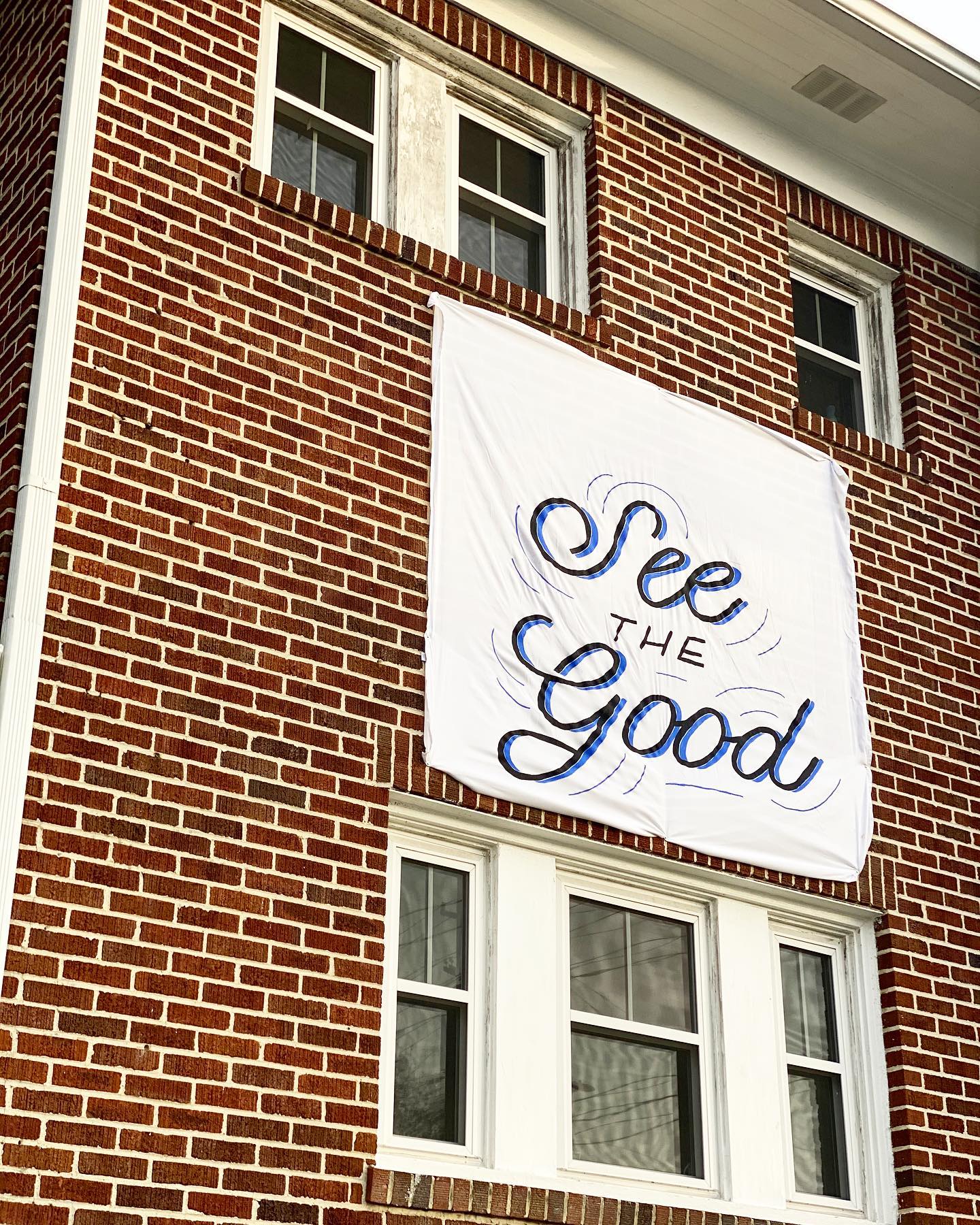 But as the day went on, she began to notice that cars were stopping outside of the building to read the sign. She even noticed people stepping out of their car to take a picture of the banner. And the message began to take on a life of its own. As pictures of the banner started cropping up on social media, the team decided they had to take it to the next level.

“We asked ourselves, ‘What can we do as a whole that impacts not only our clients but also our community?’” Christi says. The team wanted to give their community more than just a phrase; they wanted to give them resources to actively start seeing the good all around them.

The team began creating Spotify playlists for “good vibes,” “good cardio,” and more. They started sharing on their social media tips for creating a beautiful and productive work-from-home environment. They asked their followers to start using #SeeTheGood hashtag to inspire others to look for their own good.

“We threw everything out the window of what people tell you to do on social media,” Mary says. “We decided we were going to just talk to our followers and our community.”

Rather than worry about Instagram grids, daily posting times, and branded content, Mary and Christi decided that the message of See the Good was more important than any social media rules. As the message spread on social media, others began not only voicing their support for the message, but asking how they could get involved. When a mutual connection through Beane Signs in Asheboro heard about “See the Good,” he decided to donate yard signs featuring the message to Barbour Spangle.

“We thought that anyone who expresses interest should be able to share this message with their community,” Christi said. And the signs were the perfect outlet to increase the message’s reach.

“We started putting signs out everywhere people would let us!” Christi laughs. 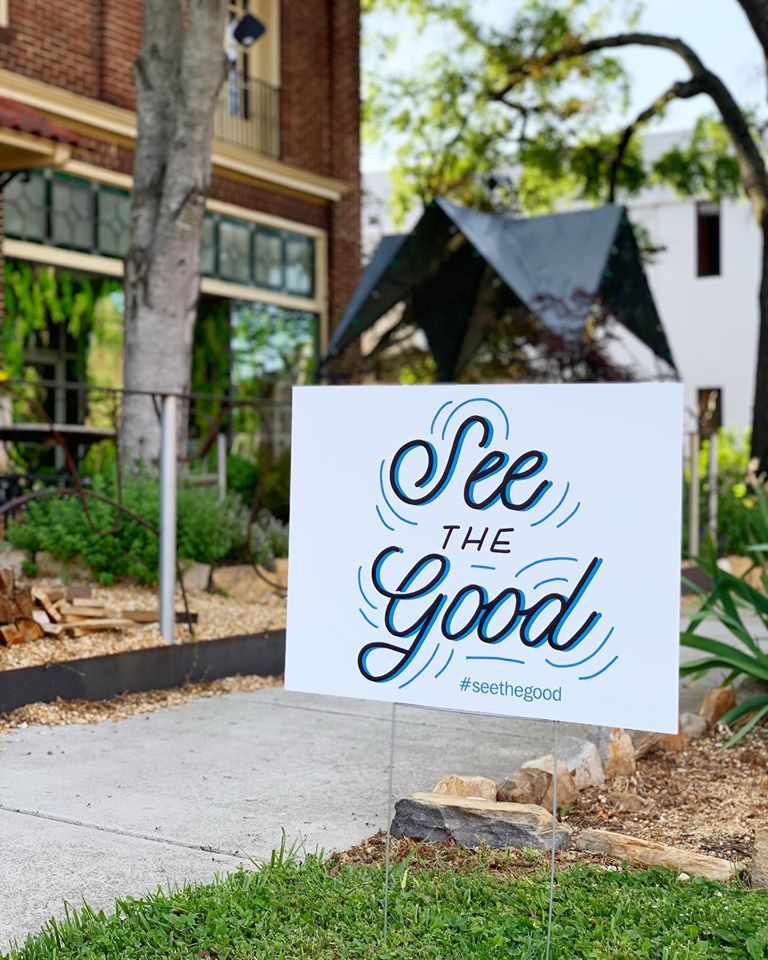 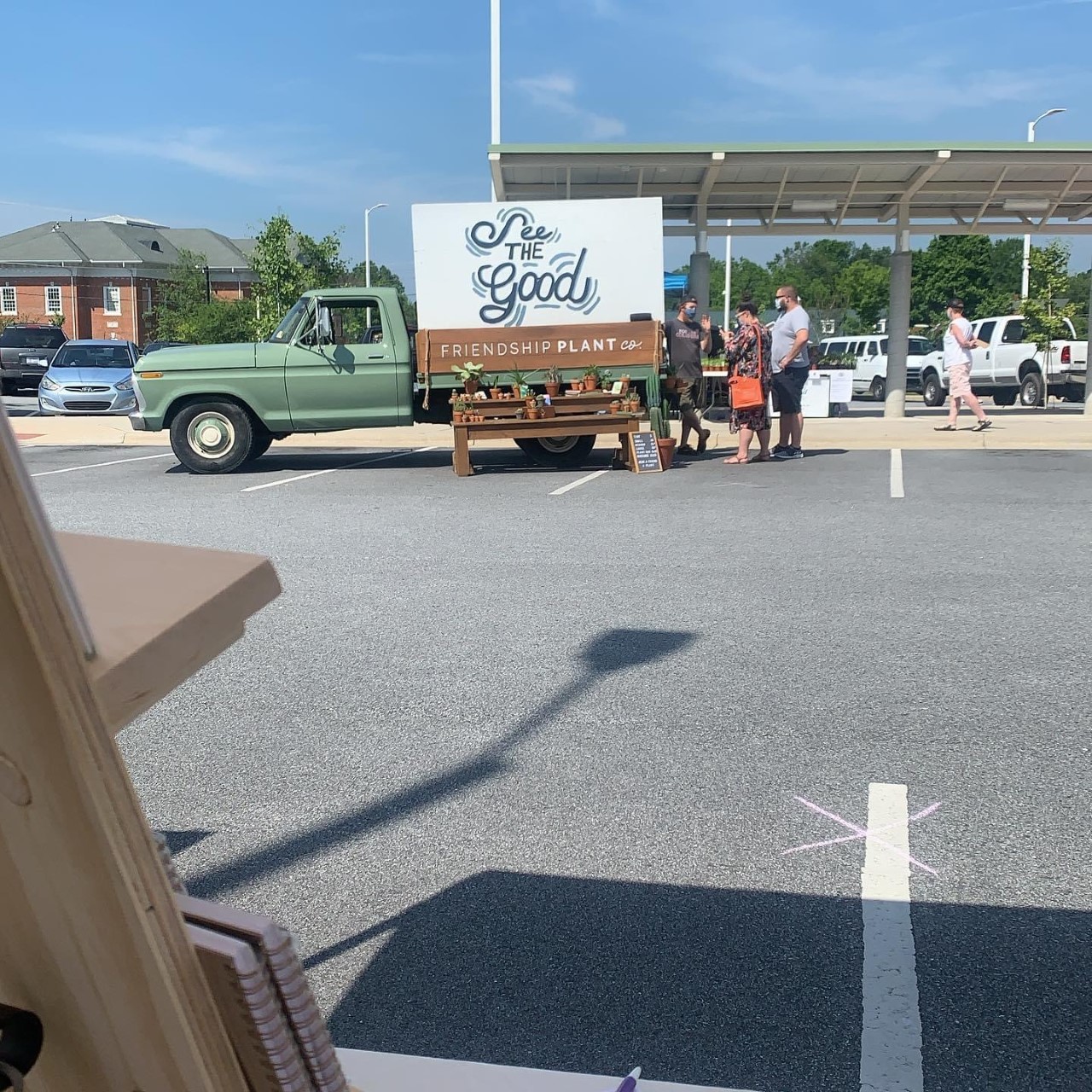 Along with giving out signs, the team was soon giving out stickers. “The stickers were an accidental bonus. The yard signs showed up, and the stickers came,” Christi adds. The donated stickers were soon being handed out to anyone and everyone. Christi would take stacks of stickers to 83 Custom Coffee, which would be gone within 24 hours.

And then High Point business owners began reaching out to the team at Barbour Spangle offering to donate their resources to spread the message further.

“Zack Allison messaged me on Instagram and said, ‘Please tell me you’re making these into a t-shirt,’” Mary adds. Zack, owner of HPNC, created a variety of “See the Good” t-shirts. Other businesses reached out as well: Katy Erikson of Monkee’s volunteered to sell “See the Good” masks, and Tom Van Dessel of Splash Works offered to make “See the Good” gaiters.

“All three businesses reached out unsolicited, and said they would donate all of the proceeds,” Christi says. This act of kindness overwhelmed the Barbour Spangle team, but they knew instantly where these proceeds would go: directly to High Point Discovered.

And as the message continued to grow, fostered by High Point businesses, benefiting a High Point non-profit, and adopted by the High Point community, everyone began to realize this message has life beyond the coming days facing COVID-19.

“This message was inspired by COVID-19, but it’s not specific to COVID-19,” Christi explains.

“The message of See the Good is always going to be relevant,” Mary adds. “There is always a time to encourage people.” 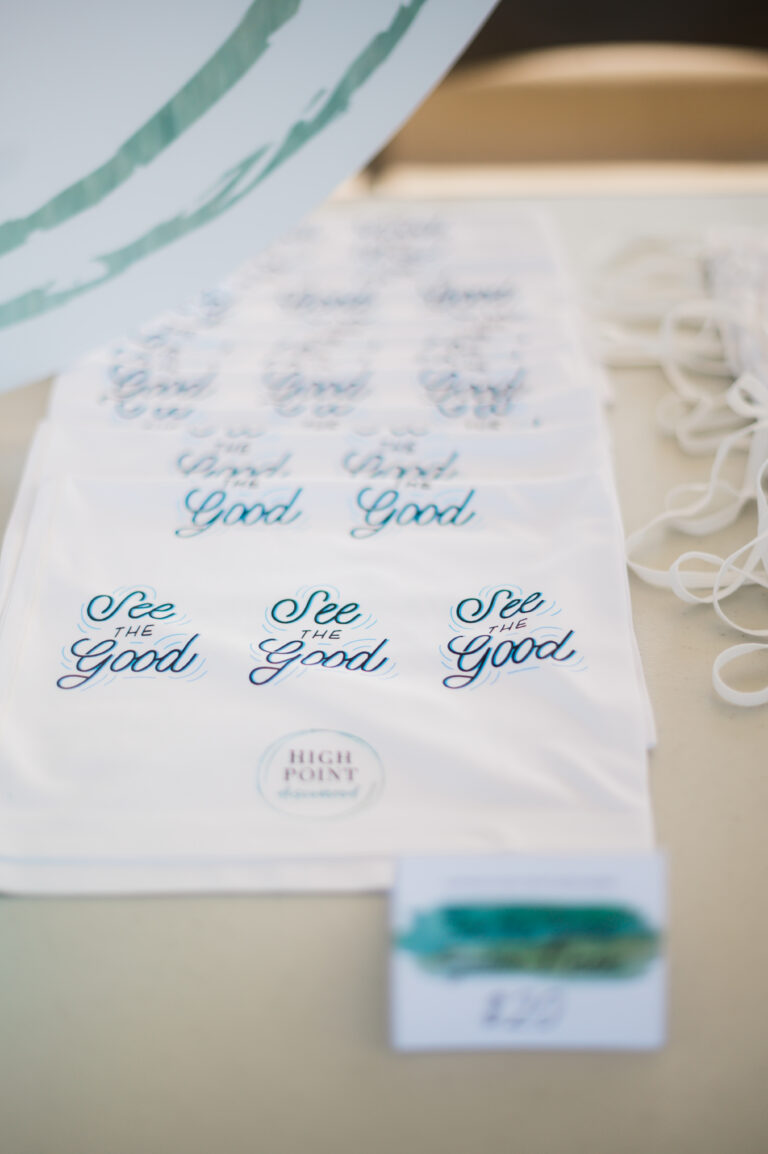 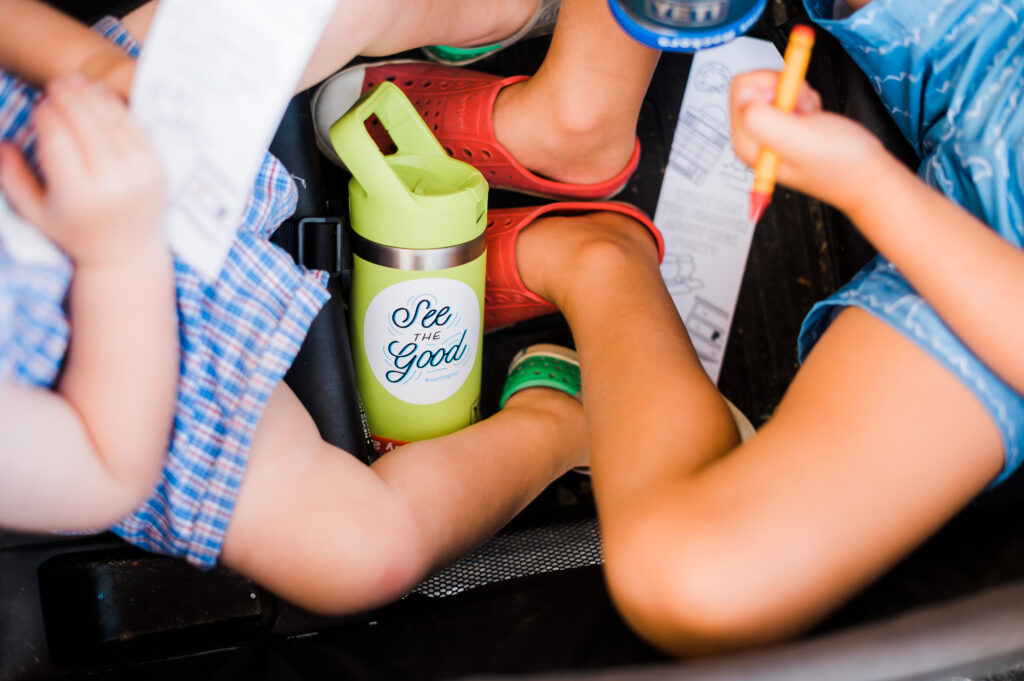 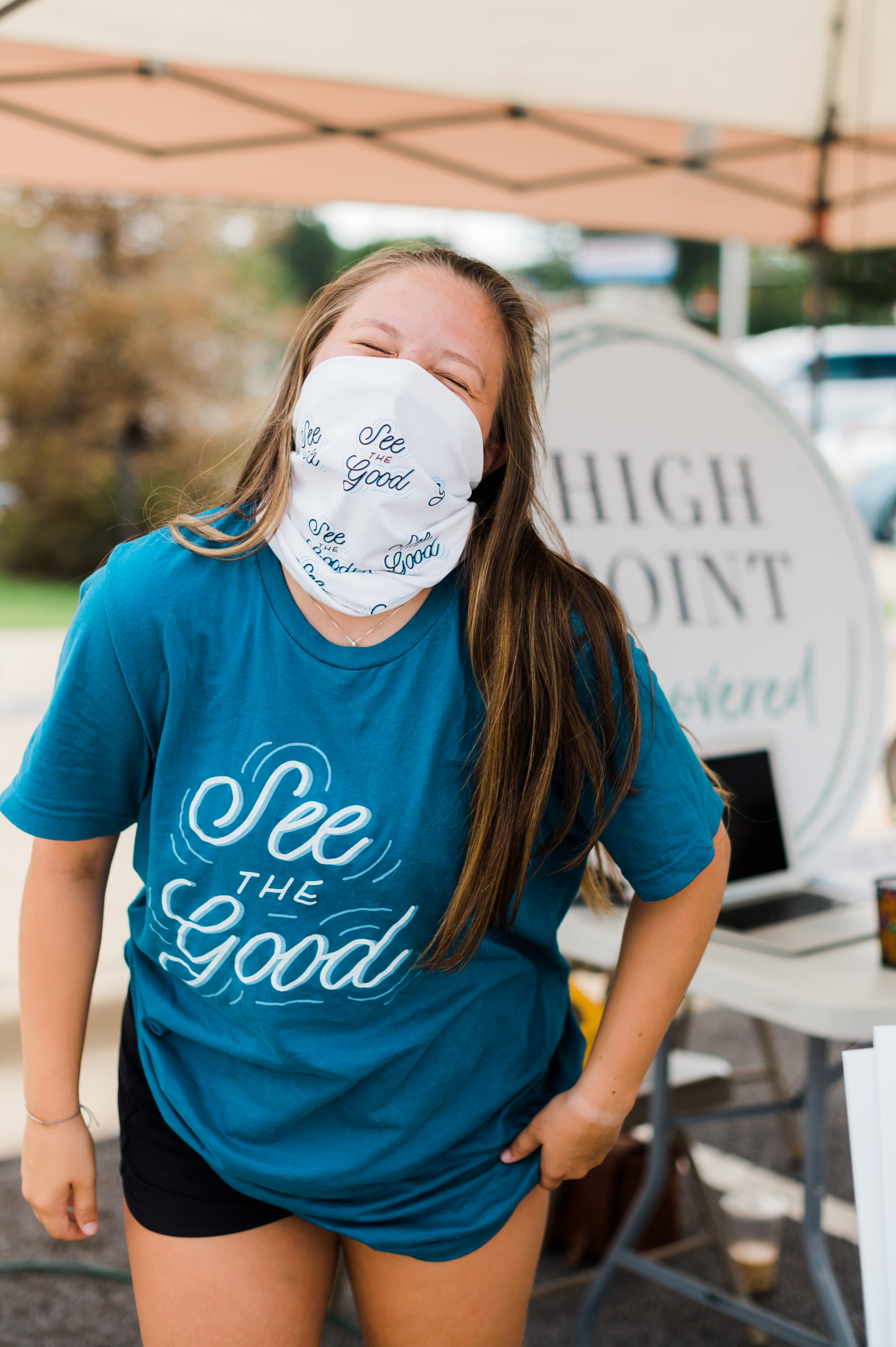 Christi and Mary both add that there was intentionality behind Barbour Spangle’s decision to leave the message unbranded. Not only does the lack of any obvious affiliation increase the message’s spread and lifespan, but it leaves room for the authenticity that we all so deeply crave.

“When you slap a logo onto something, you lose the authenticity and all that you are genuinely trying to do,” Mary explains. “We didn’t want anyone to misunderstand or misperceive the intentions behind See the Good.”

“Because it came from such a genuine place, we didn’t tie it to a marketing campaign,” Christi says. “We simply wanted to encourage and uplift our community during a time of crisis.”

While plenty in High Point have shown their support for the message by putting up signs, making their own signs, buying See the Good merchandise, and more, the message of See the Good has spread even beyond the confines of our city or state. Friends all over the nation now have See the Good stickers and shirts that they proudly wear to invite their own communities to see hope in their own pockets of the world.

Ultimately, however long the COVID-19 crisis continues, the team at Barbour Spangle and High Point Discovered are committed to seeing the good no matter what. And even more so, we believe that this time gives us the opportunity to see the good in moments we might have been missing all along.

“Maybe we thought our normal before COVID-19 wasn’t good,” Mary says. “But maybe now we can value and appreciate the smallest things we used to miss in our day-to-day life. Maybe now we’ll see the good that was already present. Having a job is enough. Having dinner with your family is enough. Hugging people is enough.”

Because the message of “see the good,” implies that there has always been good to be seen; we just have to open our eyes to it.

So tell us, how have you been seeing the good in the last six months? What small moments of goodness and kindness have you seen in your day-to-day life? Share with us on social media by tagging us or hashtagging #SeeTheGood. Together, we don’t have to let another day pass by that we don’t actively see and appreciate the good in our world, our city, and our lives.