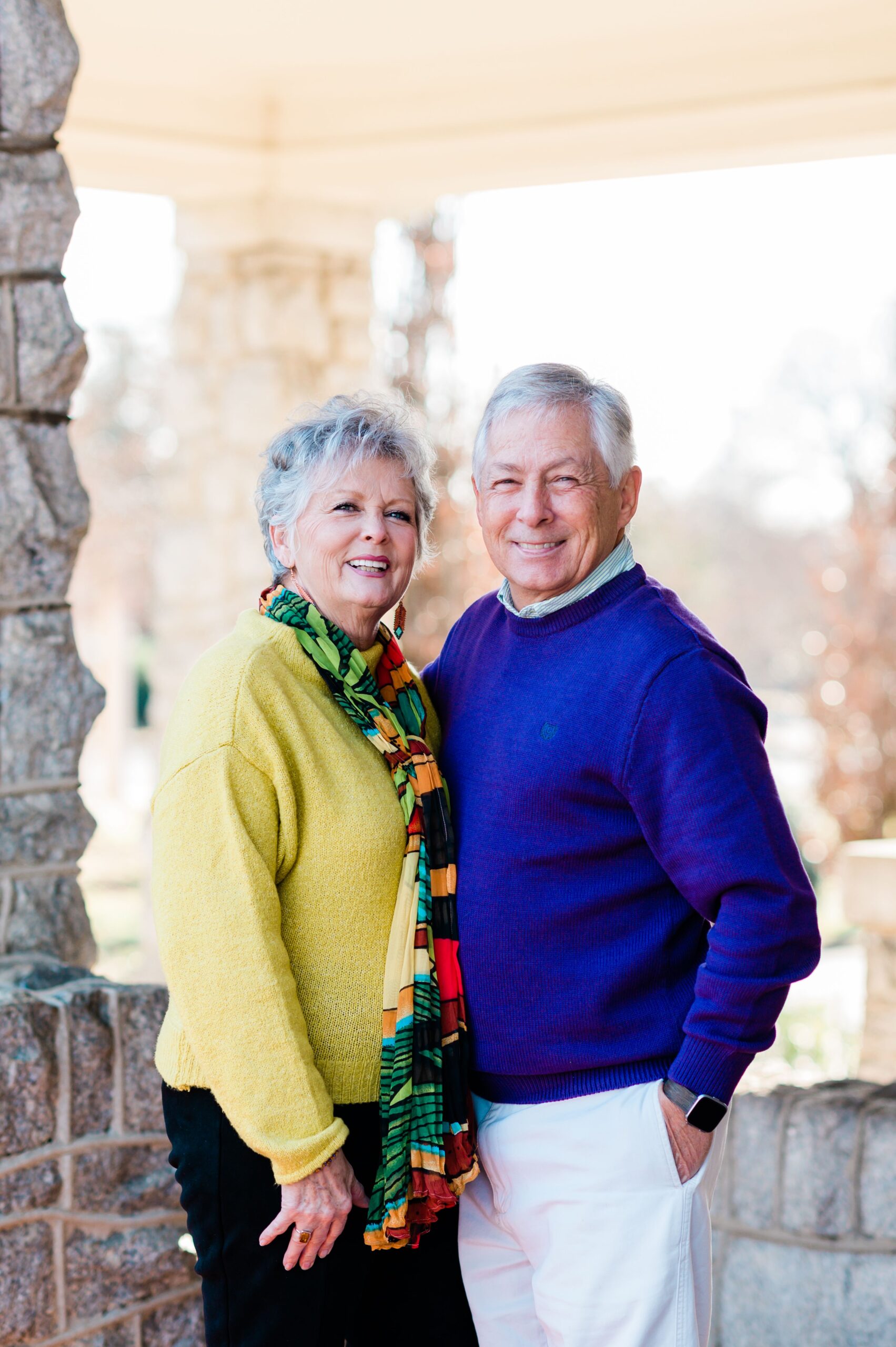 When you walk into Abby and David Williams’ house, one of the first things you might notice is the elegant, modern furniture throughout the rooms. Or you might notice family photographs spanning generations, from their parents to their five grandchildren. You might catch a glimpse of Abby’s work making jewelry or find a book on furniture design. If you go a little way through the trees surrounding their property, you might come upon the modern, glass building – which is David’s studio, WITS END DesignStudio – filled with materials, sketches, and furniture prototypes.

In the Williams’ house, you would most likely hear the easy laughter that David and Abby share or a proud story about one of their kids. All of the sights and sounds point back to the values of family, creativity, and kindness they share.

After being married for nearly 50 years, and having lived in High Point for more than 40 years, Abby and David have seen how hard work and shared values can turn a person into a life partner and a place into a home. But where did that story start for these high school sweethearts?

The year was 1968. The two then high schoolers met when they were just 15 and 16, growing up in rural farming communities in eastern North Carolina.

“She was dating my best friend,” David recounts, laughing.

“Double dating with David and another girl no less!” Abby cuts in. She remembers preparing to leave for her double date.

“I looked out the window when the car pulled up, and there sits David and the girl he’s dating, in the car – kissing!” Abby exclaims. “And I’m thinking, ‘If my mom looks out the window and sees that, I’ll never get to leave the house.’”

Of course, Abby did make it to her double date with her suitor, Mark, who later would ask her to go steady with him, but by then, Abby declined another date with Mark, as David had already asked her out. And after Abby and David’s first date, the rest is history.

“My best friend and I didn’t do a lot of double dating after that!” David teases. 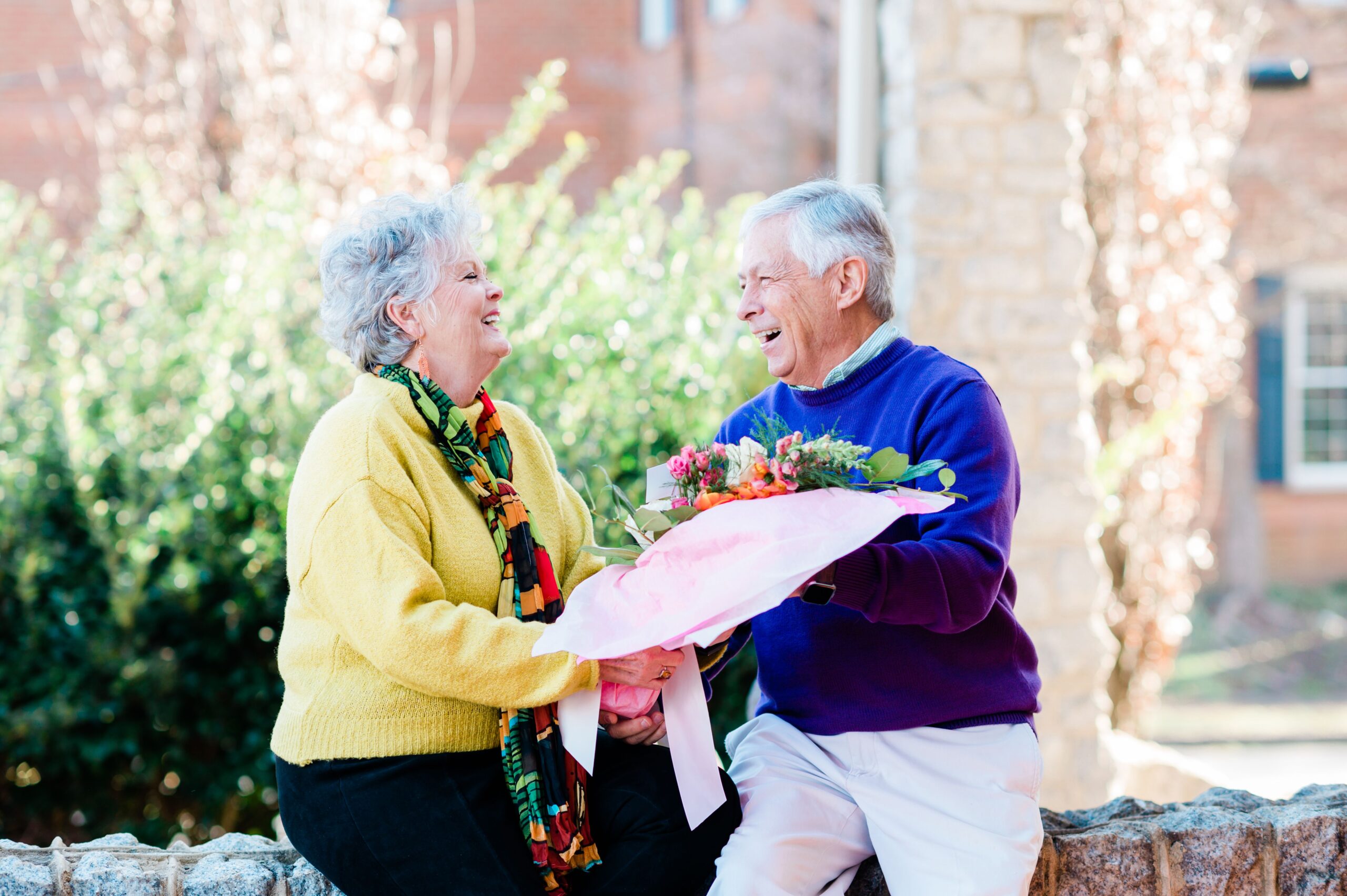 The couple dated through the remainder of high school, with the one-year–older David coming home from college at East Carolina University to take Abby to her senior prom. Their prom photo with Abby in an orange 70s prom dress still hangs in their library today.

David, who learned he had a talent for painting and drawing, was studying for his Bachelor of Fine Arts degree at ECU. But when Abby graduated high school, and the two decided to get married, David redirected his life’s path.

“I’m not going to be able to support a family painting pictures,” David recalls thinking, “so I decided I wanted to do some applied arts.” North Carolina State University had an architecture program, so he applied and transferred his credits. Abby and David married and set off for Raleigh, NC.

“To quote his mother, ‘Two can live as cheap as one,’” Abby says. David and Abby laugh now at this sentiment.

“She lied!” David exclaims. But David and Abby didn’t let their lack of income stop them from starting their life. While David was still in school, Abby became pregnant with their daughter, Amy.

“In the late sixties and early seventies, everybody we knew got married very young, and it was not unusual,” Abby clarifies. They lived in a trailer belonging to Abby’s stepfather’s mother, which was, as David describes it, “40–feet long, eight–feet wide, with about a six–foot ceiling.” While he wasn’t in class, David worked at the on-campus snack bar, taking on extra shifts from other students, and Abby worked office jobs. They learned they shared the values of frugality and hard work.

“We had to rely on each other,” Abby says. “We didn’t live near any of our family, so we had to support each other. When I say we grew up together, we did do a lot of growing up in that time.”

And when their only form of transportation, an old Plymouth Fury, began to give out, David bought a 1961 Volkswagen window bus with a blown-out engine for only $250.

“But the old owner had just put a brand new set of tires on it,” David justifies, smiling. So David rolled up his sleeves and rebuilt the engine in the van that they would drive for years. 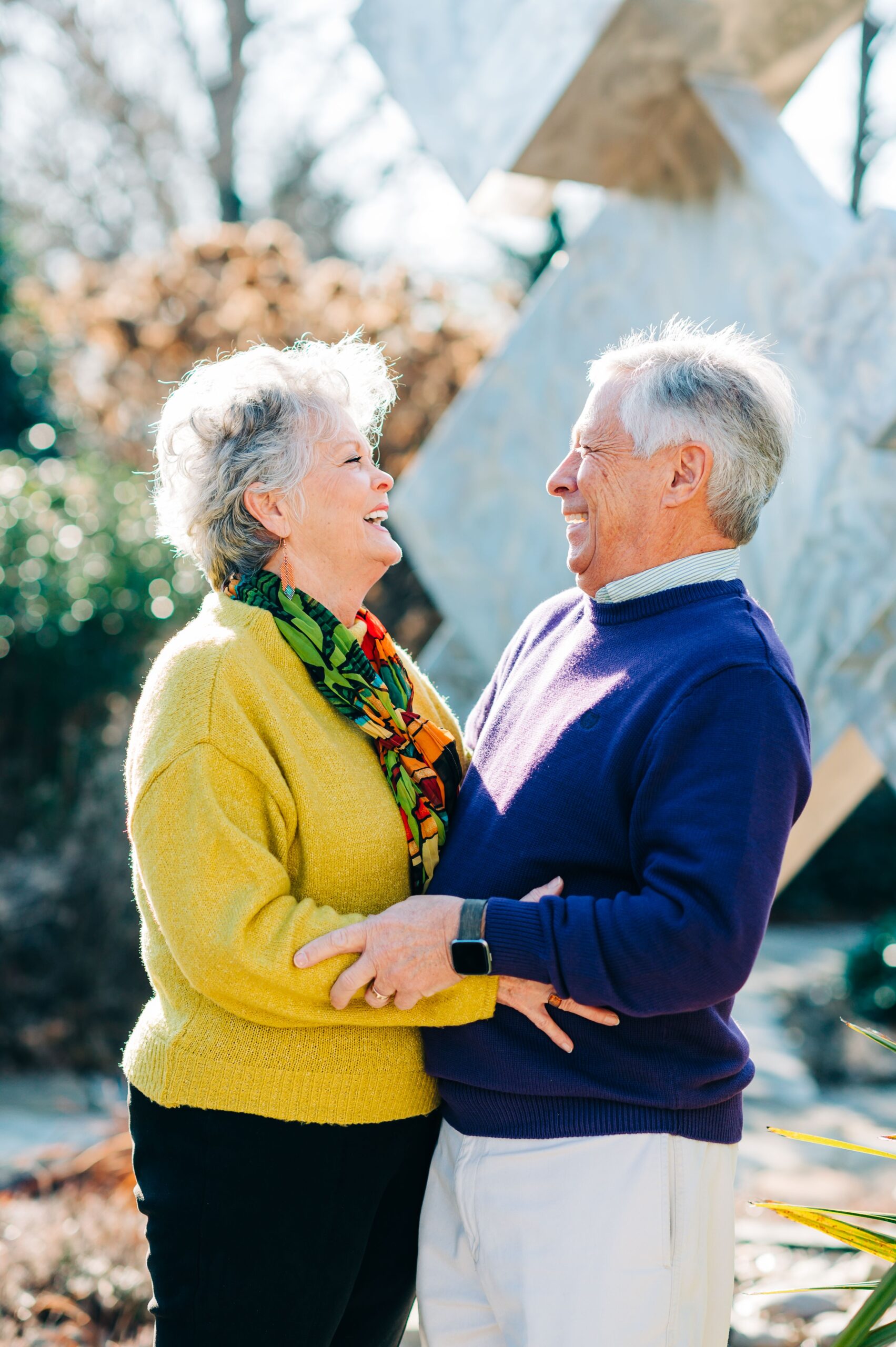 After transferring back to ECU to complete his degree and become the first member of his family to graduate college, David began looking for a full-time job to start using his applied arts degree in 1974.

But with the 1974 recession, and many architects out of work, the Williams redirected again as David decided to go into the home furnishings business. That’s how David ended up visiting and interviewing with four furniture manufacturers in High Point, and taking a job with a young start-up, Paul Brayton.

David recalls a time right after he graduated when he was supposed to go to Chicago for an international furnishings show. His parents bought him a suit so he’d have something to wear at the show, and he rode to the show in a car very different than his VW van: one of Paul Brayton’s cars, formerly Priscilla Presley’s Rolls Royce.

After the Williamses move to High Point, it would be a while before David would actually spend his days designing. First, he worked in an apprentice program in a factory, spending time in various aspects of home furnishings production: from patterning, to cloth covering, to upholstering. In fact, David worked in nearly every avenue of furnishings production… except design. That’s what the nights and weekends were for. Meanwhile, Abby was working as a receptionist at what was once Norling Studios, a company that photographed many of the products and showrooms that David’s colleagues created. 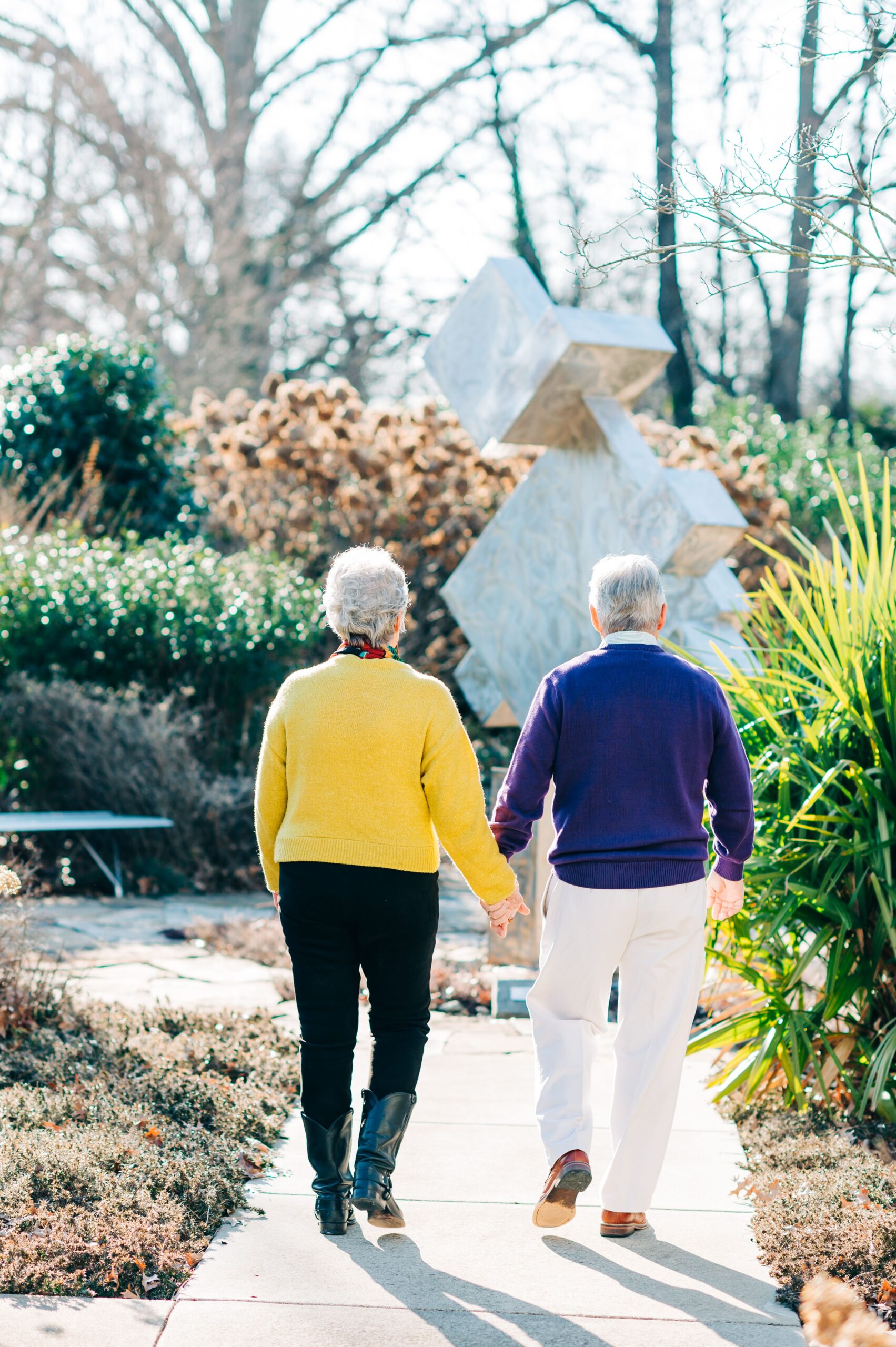 And while the Williamses originally thought they might only stay in High Point for a few years, they were soon swayed by the “hometown feel” High Point had to offer. They found a church home, first at English Road Baptist Church and many years later at First Baptist Church of High Point, and they began to form traditions, like weekly trips to beloved diner, Alex’s House.

“There are such good memories at Alex’s House for us,” Abby says. “We would go there Sunday after church, or our kids could walk there from our house on Otteray Avenue.”

“We have gone to Alex’s House now as a whole family,” Abby says, “and there’s 11 of us!” The Williamses joke about taking up the whole restaurant with their kids and grandkids, who always make Alex’s House a part of their visits to High Point. Their kids, Amy and David Mark, who graduated from High Point Central High School and Southwest Guilford High School respectively, grew up among what Abby and David call the “salt of the earth people” of High Point.

“If there was a time when we thought about leaving High Point, we abandoned that thought because our kids were getting along so well here,” David says.

But at the end of the day, it wasn’t just cheesesteak hoagies at Alex’s House, or Priscilla Presley’s Rolls Royce, or a house on Otteray Avenue that kept the Williams family in High Point: it’s the values they shared with the community.

Take that house they bought on Otteray for example; it was purchased with a down payment loaned to them by David’s employer.

“It was a fixer-upper before ‘fixer-uppers’ were the thing to do!” Abby jokes. “It was just the only house we could afford.”

“And my employer at the time loaned us the down payment on that house,” David explains. “You can’t find that in New York City or somewhere else.”

Within three or four months after that purchase, David’s boss gave him a bonus that would have been more than enough to pay back the loan, but David’s boss told him to put the money towards the house and his family.

“He did that because he was a great fellow and had a wonderful heart,” David says. “That’s one of the reasons that we stayed in High Point – because we ran into those people all the time.”

Their church on English Road was filled with people of a similar heart. Despite being the youngest members of the congregation, David and Abby were overwhelmed by the generosity of the church.

“They took us in as if they were our mom and dad,” Abby says. “They were just so kind and good to us that we stayed for the next 14 years... We had so many folks like that in High Point who became our family. They took us under their wing.”

“That’s a wonderful part about this area,” David notes. “The values that people have from one group to another are pretty consistent. People look out for each other. They’re really trying to be good people.”

Alongside the strong community, family, and faith values Abby and David found in High Point, they also found other values they prized, like a strong work ethic and career opportunities.

“There is work ethic that folks exercise around High Point,” David says. “They don’t want things given to them. They’re willing to work hard for what they want if they’re given an avenue to make it happen.”

“And there’s opportunity here,” he adds. “We realized we could do what we like to do.”

David, who later became a staff designer at Jack Cartwight, Inc. for 22 years, eventually opened his own studio. Abby, who started as a receptionist, went on to work her way up through accounting to being an Account Executive. 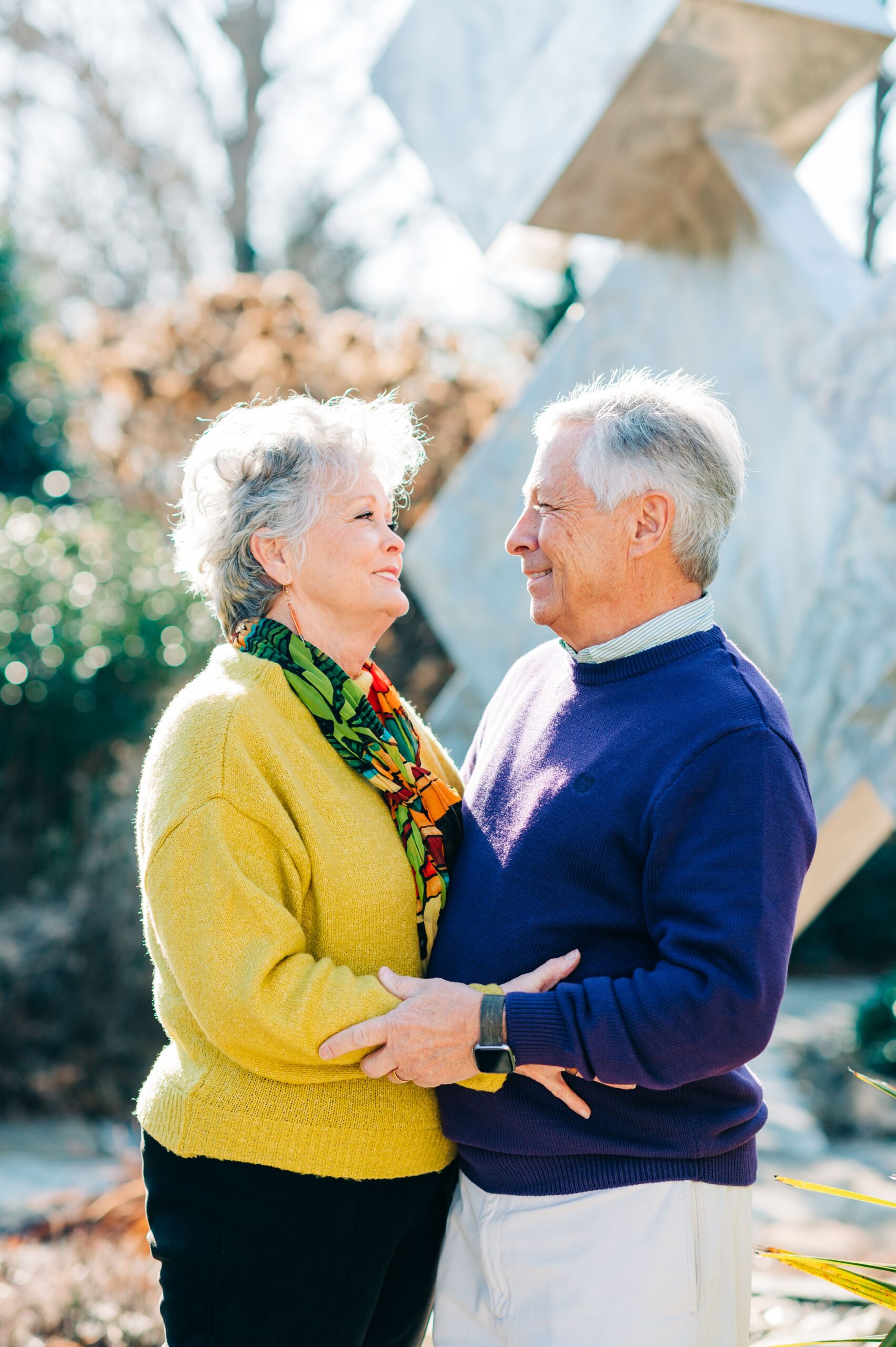 Now, as an independent furniture designer, David remains active in the design community in High Point. Both Abby and David stay busy with volunteering in the community and at their church, looking for opportunities to support the younger generation in High Point, as they were once supported in the city. They discuss the perks to living in the now more metropolitan High Point, like the international nature of the city, the creative community, and the growth happening around downtown revitalization.

They also discuss that just like the city they call home, they have grown a lot over the years. While High Point is not the same city it was in 1974, the Williamses aren’t the same people either.

“We’re not the same people we were at 17,” David says. “You grow, and unfortunately many people grow apart.”

But some, like Abby and David, don’t. Throughout their lives, Abby and David have worked to grow together, remaining a team, supporting each other no matter what, and sharing everything that they had.

“I was just afraid to buck you!” David jokes, and the couple laugh.

“We’ve covered for each other,” Abby goes on, listing shared duties of cooking, cleaning, caring for their children, and running their home. “It’s never been ‘your job’ or ‘my job.’ It’s ours.”

And after nearly 50 years, Abby and David have not only grown up together, but they’ve grown alongside this city they call home – a city that isn’t his or hers, but a city they call “ours.”

Want to get to know the Williamses a little more, and see our city through their eyes? Check out our video made in collaboration with Visit High Point, to spend a day in High Point with David and Abby.