Everyday we get more and more excited about the High Point Rockers being a new part of our community! While you may have driven by the construction and seen bits and pieces of the stadium’s brick exterior, we want to give you a little more information about what’s happening inside the stadium. 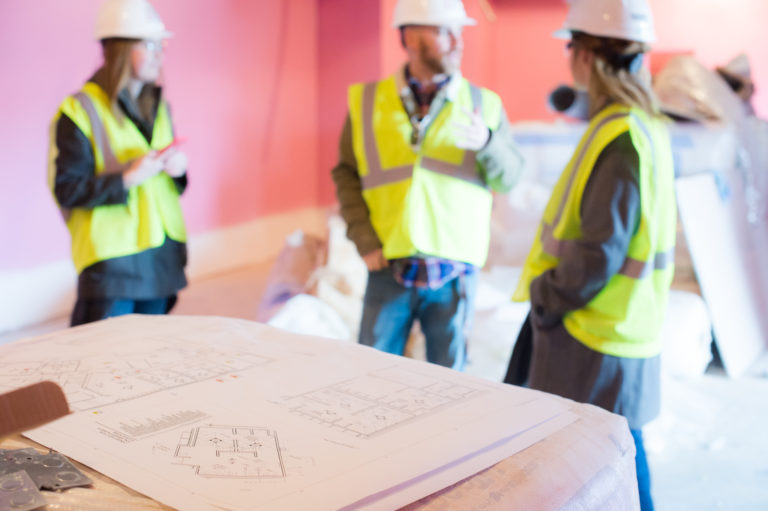 Just a few weeks ago we had the privilege to walk through the stadium construction (lucky right?)! While right now it may look like a lot of dust, wiring, insulation and concrete, the Rockers are on target for meeting their May 2 goal. They are currently in the process of finalizing floors, adding paint to the walls, and getting all the electrical work ready to mount televisions in the team’s clubhouse. 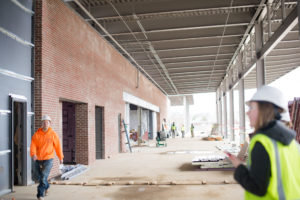 While there, we were able to tour all of the underground workings of the stadium that will house offices for full time staff, locker rooms for our team and away teams, as well as a lounge for the players. We even got to experience walking through the player entrance onto the field that our team will walk/run out of every game! 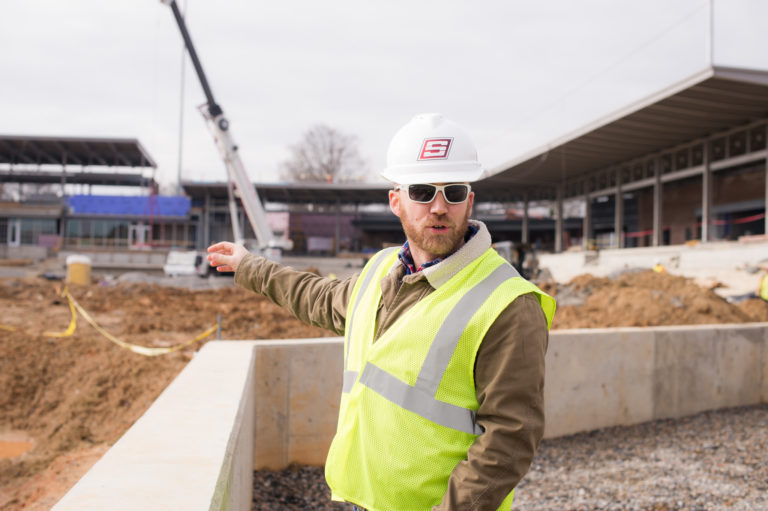 The concourse for food and merchandise offers an incredible space to enjoy the full experience of the Rockers’ stadium. Food, drinks, and more will be available to fans, along with a special “Kids’ Zone” space. Hello, parents! Who doesn’t want to enjoy their friends while also watching their kids have a great time? 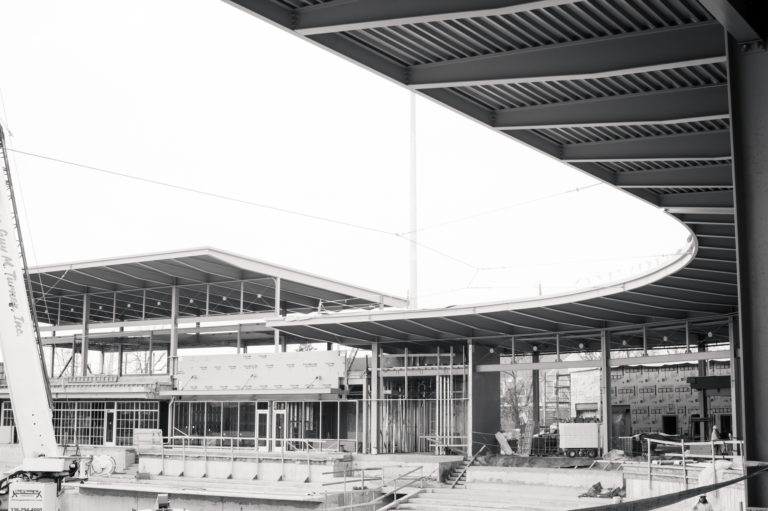 But that’s not all! Your next birthday party or friend get together is going to have a new perfect location: the stadium! Several different spaces are available for renting out to host parties and events. Already, the indoor suites for parties or events are walled, and the loge boxes (open air, brick-walled suites available to rent for events) are being laid. An area behind home plate, known as the “home plate perch,” will also be made available. 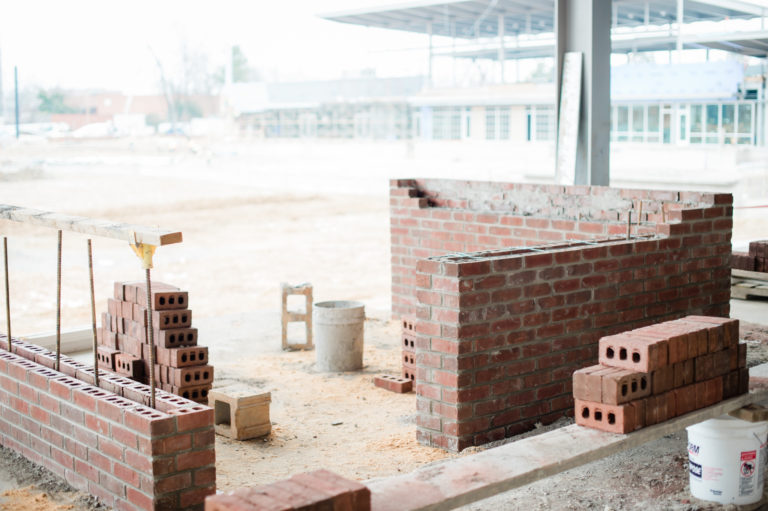 And while we’re so thrilled about all of this excitement and hype surrounding the stadium, we want to know more about the team itself. After all, the stadium isn’t just a new part of our city architecture. The Rockers are going to be our team! 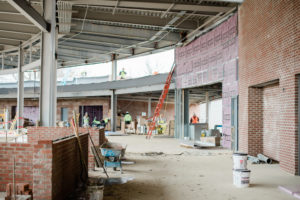 We spoke with Ken Lehner, president of the operating non-profit, High Point Baseball Inc., Christian Heimall, assistant general manager, and Jamie Keefe, the team manager. Although these guys are super busy right now, they took time to answer some questions we had, and you might have, regarding the High Point Rockers.

Christian Heimall is pictured below on the left and Jamie Keefe is on the right. 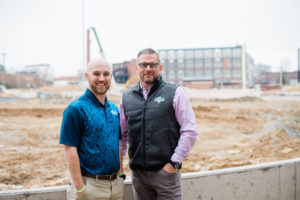 Christian Heimall is pictured below on the left and Jamie Keefe is on the right.

Q: What is the process of starting a team from scratch like?

For Ken, Christian, and Jamie, they’ve had years of experience in baseball and sports, so they know the steps that need to be taken when a group is starting a team from the ground up.

“It’s not just the ballpark,” says Ken. “It’s all the other elements.” Some of the most important other elements are the players. Jamie’s job as the team manager is making sure that they sign all 25 players and that they mesh together as a cohesive team. Although there will be some fluctuation of players coming and going during the season, Jamie and the coaching staff will ensure that there is a steady and dedicated attitude throughout the season.

The team is already signing players, with the first one signed on January 1. Now the goal is to sift through all the players interested in playing for the Rockers and select the best possible team. 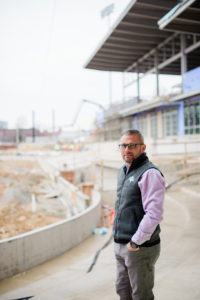 Q: Is the High Point Rockers team the same as the Greensboro Grasshoppers or the Winston-Salem Dash?

In short, no. The High Point Rockers is part of the Atlantic League, an independent professional baseball league. Basically, independent leagues are not a farm team for a major league team (for example, the Greensboro Grasshoppers players who go on to play Major League Baseball will work up to playing for the Pittsburgh Pirates). With Minor League Baseball teams, there are seven or eight levels that players have to work through to make it to the majors.

However, with the independent teams, they function as a step below major league ball and a step above a Triple A team. A lot of players in the independent leagues may have played at the professional level already, been released from their contract, and are looking for a way to play and get back into the majors. (Which actually happens quite a lot out of the Atlantic league!)

So what does all this mean for the High Point Rockers roster? It means that our recruiters get to choose players who have already proven they have what it takes to have a successful baseball career, which increases the caliber of talent and competition. MLB scouts are always on the lookout for players from independent leagues – especially the Atlantic League, which is the only independent league with a written contract with the MLB.

“The competition breeds excellence,” Jamie says, having been on independent team leagues himself. “The bring the best out of each other.”

Q: Does this mean more players will be moving here to play ball in High Point?

In short, yes! At least for a little while. Christian explained that independent and minor league baseball really rests on the generosity of host homes and families. These players will be looking for housing during the season, and many of them will be staying with host homes from the community.

“That’s you having a hand in the organization,” Jamie states about families willing to host players in their home. He and Christian both explained the closeness they shared with their own host families when they played ball. More information on how you can be involved in being a host home for future Rockers players will be coming up on our blog soon! 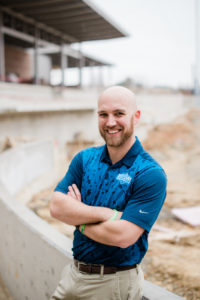 Location! The staff is excited that High Point is the home for this new team. And it’s groundbreaking for the Atlantic League, since there aren’t any independent league teams within 300 miles or so of High Point. “We’re building a brand new stadium, in a new city, in the south,” Jamie explains. He also stated his excitement about being close to some of the great college and university teams of North Carolina. Some of the players who aren’t signed to MLB teams from their college careers will be able to transition smoothly into playing for the Rockers. The Rockers are also taking several other innovative risks, such as using turf instead of real grass and a synthetic pitcher’s mound. “Our goal is to make a destination in the league,” Jamie says. “We want to make a name for ourselves, so that we are the place to play in the league” But the Rockers aren’t just going to play good games and attract high caliber players (although who doesn’t love that?). They’re going to be doing even more. “Our biggest goal is to have the team impact the community,” says Ken, “whether that’s a place for volunteers, college interns, or just a place for community members to have fun.” One thing is certain. The High Point Rockers are a new chapter in our story of High Point. And that seems like a HOMERUN for everyone!

← A View On: Sarah Lytle ArtDates for Every Kind of Valentine’s Day →
×